A Graphic Look at the Window to Win: Los Angeles Dodgers

Share All sharing options for: A Graphic Look at the Window to Win: Los Angeles Dodgers 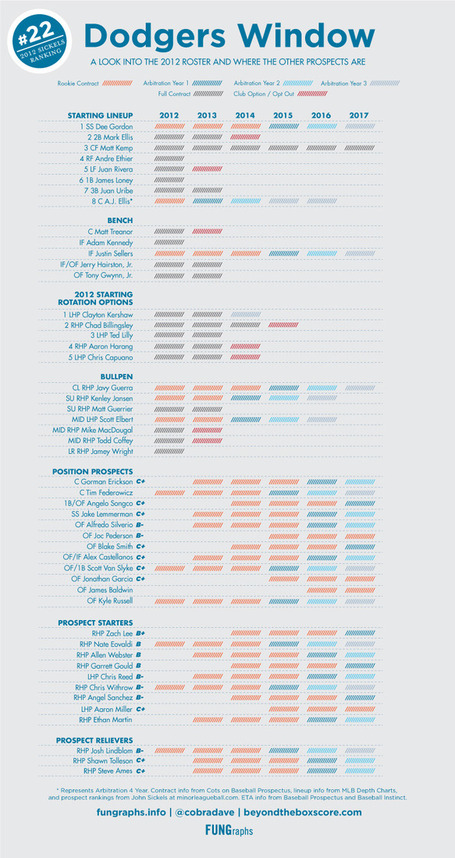 28th in the series, we look at the Los Angeles Dodgers. We have a team ranked 22th overall by John Sickels with no A-rated prospects, but 10 B-rated prospects. Their system varies across all three rankings we looked at; 19th in Kevin Goldstein rankings and 12th in Keith Law's 2012 organizational rankings. With his more generous ranking, Law sees some optimism about the system:

If pitching wins championships, the Dodgers are in pretty good shape going forward, as their system is loaded with power arms but is relatively light on position players.

The news of the new ownership is long overdue and should signal a new renewed commitment to winning. Hopefully with some magic in mind, when is the window opening for the Dodgers again in a tough NL West?

Last year's Dodger team won a respectable 82 games, and while they haven't done much to improve the roster, they might not make it back to that win total this season. Yesterday, Jason Brannon from Baseball Nation compiled projected 2012 standings from PECOTA (Baseball Prospectus), Marcel (Tom Tango), CAIRO (Replacement Level Yankees Weblog), and Clay Davenport. Here's how the compiled projections sees the NL West:

Personally, I think their win total lies somewhere closer to 80 games, but who am I to argue with algorithms?

Here's what the Dodgers roster projects to be in 2012:

The bulk of the rotation is locked up through 2014 with the exception of P Ted Lilly. At the end of this season, they'll have to make some decisions on whether they should re-sign both OF Andre Ethier and 1B James Loney. As USA Today noted in their Dodgers preview, this season's success rests on both Ethier and Loney. Hopefully while both being on their contract years, they'll both play for an extension.

The Dodgers farm system isn't in terrific condition, but it's not bad, either. They have good strength in right-handed starting pitching: Lee, Eovaldi, Webster, Gould, Sanchez, and Withrow could all develop into workhorse starters and perhaps more.

The Dodgers have a daunting task at hand with the Giants and newly revived Diamondbacks in the same division. It doesn't look like they'll be competing for the NL West crown this year, or maybe even next, but with new ownership, it's likely that they'll be back sooner than later. The window for the Dodgers will be open again hopefully as soon as 2014.