A Graphic Look at the Window to Win: Los Angeles Angels of Anaheim

Share All sharing options for: A Graphic Look at the Window to Win: Los Angeles Angels of Anaheim 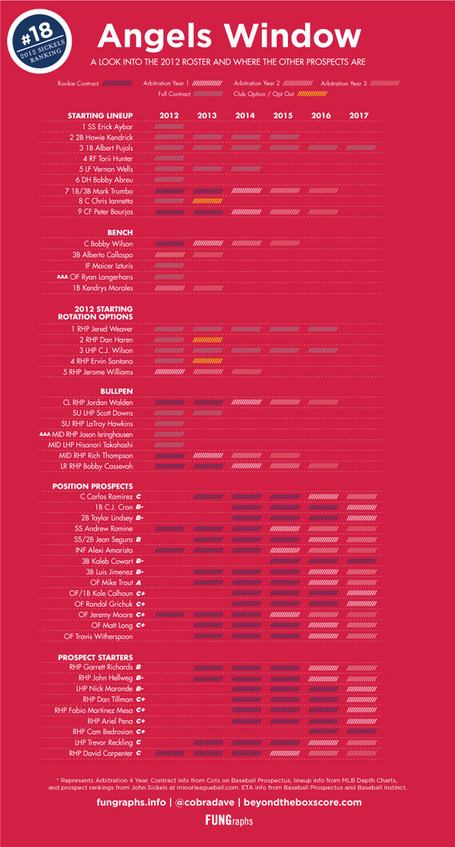 26th in the series (we're almost through all the teams!), we look at the Los Angeles Angels of Anaheim. We have a team ranked 18th overall by John Sickels with 1 A-rated prospect and 7 B-rated prospects. Their one A prospect, OF Mike Trout is top-3 this year, but asides from him, the system is a little thin. They rank 23rd in Kevin Goldstein rankings and 15th in Keith Law's 2012 organizational rankings.

As we start looking at these perennial playoff contending teams rather than just the smaller payroll teams I've covered before, the question about the window changes. The Angels made huge moves this offseason signing the top two free agents in Pujols and Wilson. Will this help propel them over the Rangers and open a window the window for them indefinitely?

Winning 86 games last year, if they were to merely improve by a few games, they'll likely at the least be in line for the second wild card in 2012. In CAIRO's projected standings, they have the Angels winning 91 games, right in line for the 2nd wild card (WC 1: 94 wins, WC 2: 91). As a point of comparison, Baseball Prospectus projections has the Angels at 88 wins, but still in line for the wild card.

Here's what the Angels roster projects to be in 2012:

The Angels have an outfield problem, and when OF Mike Trout comes up this season, it's only going to get more congested. I'd be interested in seeing what Angels fans see Trout playing once he comes up. Current RF Torii Hunter's contract is up at the end of this season, so there's a suitable fit in RF for him. In the big league club, his playing time has been split on all three OF positions (LF: 10 gms, CF: 13 gms, RF: 13 gms).

3 of their top 5 prospects, SS/2B Jean Segura, 2B Taylor Lindsey, and 3B Taylor Cowart, are in the infield. Segura will be competing for some infield playing time next season to replacing SS Erick Aybar if they elect not to re-sign him. Their top pitching prospects, P Garrett Richards and P John Hellweg are set to join next season. I imagine the Angels will exercise the options for Haren ($15.5M) and Santana ($13M) next year, so we'll see how the prospect pitchers playing time shakes out.

I see the Angels and Rangers similarly to the Red Sox and Yankees. I think they've set themselves to win now, especially with the long term commitments to their players. The window in AL West is open, but can possibly remain open through 2016. This is a great time to be an Angels fan.