A Graphic Look at the Window to Win: Detroit Tigers

Share All sharing options for: A Graphic Look at the Window to Win: Detroit Tigers 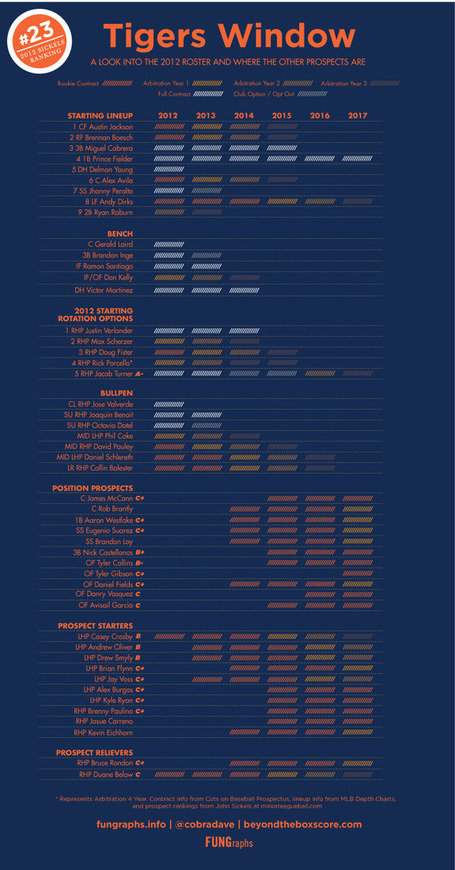 22nd in the series, we look at the Detroit Tigers. We have a team ranked 23rd overall by John Sickels, they have 1 A-rated prospects and 5 B-rated prospects. They rank 24th in Keith Law's 2012 organizational rankings, and 27th in Kevin Goldstein rankings. Critical of their system, Goldstein notes:

Among the shallowest systems in the game, the back-end of their Top 11 wouldn't make some Top 20s.

As we start looking at these perrenial playoff contending teams rather than just the smaller payroll teams I've covered before, the question about the window changes. With the Fielder signing this offseason and following Verlander's MVP/Cy Young 2011 season, how long does the Tigers window stay open?

DH Victor Martinez unfortunately is lost for the season with a torn ACL, but as this unraveled, they didn't panic, but snagged up prized FA 1B Prince Fielder as the mystery team. Any potential WAR or runs lost due to injury are easily replaced by this move.

Here's what the Tigers roster projects to be in 2012:

An earlier version of this graphic had top prospect P Jacob Turner in the starting rotation, but MLB Depth Charts have projected otherwise. Even the Tigers SB Nation blog Bless You Boys, lists Turner on the outside looking in. Reports today from The Detroit News from Lyle Henning explains the "dead arm" he has is tendinitis in the shoulder. He's gonna be held back for about a week, but nothing is certain at this point regarding the fifth starting spot.

Although their second best prospect 3B Nick Castellanos has an ETA of 2015, there's P Casey Crosby, P Andrew Oliver, and P Drew Smyly all set to come up by 2014.

Jonah Keri summed it up best at the end of his Tigers season preview by saying:

The American League could be a bloodbath this year with the Yankees, Rangers, and Rays loaded again, the Angels making major upgrades, and the Red Sox sporting enough talent to fulfill much of the promise they had last year. But with Verlander, Scherzer, and Fister atop the rotation and a loaded offense potentially getting even better, the Tigers have the talent to win the pennant. In a weak AL Central, they also have the easiest path to make the playoffs and give themselves a shot.

With the addition of Fielder, Martinez hopefully coming back strong next season, and all the pitching upside, the window is immediately open now, and at least through 2014, the last year of Verlander's contract. Good work.