A Graphic Look at the Window to Win: Houston Astros

Share All sharing options for: A Graphic Look at the Window to Win: Houston Astros 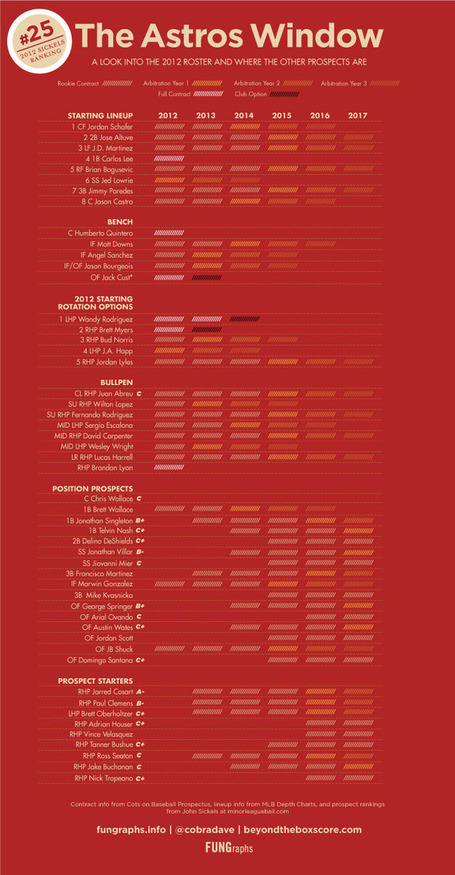 Third in this series, we look at a future AL West team, the Houston Astros. On Minor League Ball, John Sickels just released his organizational rankings, and at 25th best farm system, it's hard to see any sort of immediate optimism for the Astros. Don't forget, it might be harder going into a tougher AL West in 2013.

But lets take a look and see when the Astros are best set up to compete.

#1 and #3 prospects in their system, 1B Jonathan Singleton (#1 for Sickels, #3 for Goldstein) and RHP Jarred Cosart (#3 Sickels, #1 Goldstein) were acquired from the Hunter Pence deal. Their first pick in last years draft, OF George Springer comes in as #2 in both lists. Singleton and Cosart can come up as soon as next season, while Springer will look to break the roster in 2014. RHP Paul Clemens, acquired from the Michael Bourn trade also gets an honorable mention here. Here's what their current roster looks like.

According to John Sickels list, the only other prospect worth mentioning is SS Jonathan Villar, ironically, also acquired from the Phillies from the Oswalt trade. I've included the rankings in the graphic, so you can take a quick glance at what the Astros have in store.

It's hard to gauge how the Astros will compete with a group like this going into the AL West, but as Singleton/Cosart/Clemens with an ETA of 2013, and Springer/Villar with an ETA of 2014, giving the prospects a couple years to mature, they're looking at a similar window to the A's at 2015-2016.

See the previous graphics in this series: Mariners | Athletics