A Graphic Look at the Window to Win: Seattle Mariners

Share All sharing options for: A Graphic Look at the Window to Win: Seattle Mariners 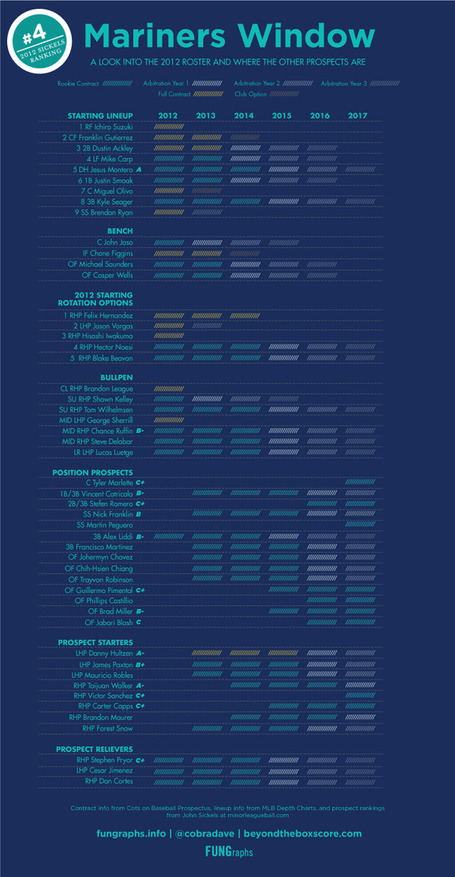 In a new series here at Beyond the Box Score, just in time for prospect season, we take a look at the idea of "windows" and a team's prime time to win. Inspired what seems to be a once every three year rebuild for the Oakland Athletics, is there going to be a time where all their premier prospects hit and they'll have the best chance to win? Here we present the pleasures of trying to maximize production during one's service time.

Since the Seattle Mariners are hot news right now with the Pineda/Montero trade, lets start with them. Does the Pineda trade wipe out an irreplaceable piece of their starting rotation? Let's see what the M's are looking towards for their future roster.

With two five-star prospects in Taijuan Walker (ETA 2014) and Danny Hultzen (ETA Late 2012) according to Baseball Prospectus, and a four-star prospect, James Paxton (ETA 2013), they have some pitching depth to compete for rotation spots behind Felix Hernandez. Hector Noesi, the other piece received from the trade, will be ready to start right away, and according to MLB Depth Charts will occupy the #4 spot in the rotation. Here's their outlook for 2012:

Looks like they a lot of their top position prospects will have the opportunity to move up in 2013. Their current projected started lineup looks to possibly remain the same for a while. Note, Ackley and Carp will go into their first years of arbitration in 2014, with Montero doing the same in 2015. The only concern I see is King Felix's contract is up after 2014, so between now and then, hopefully they can utilize his services to make a run. While the ETA for the graded prospects are from Baseball Prospectus, the other estimations are based off the assumption of one promotion per year.