A Graphic Look at the Window to Win: Toronto Blue Jays

Share All sharing options for: A Graphic Look at the Window to Win: Toronto Blue Jays 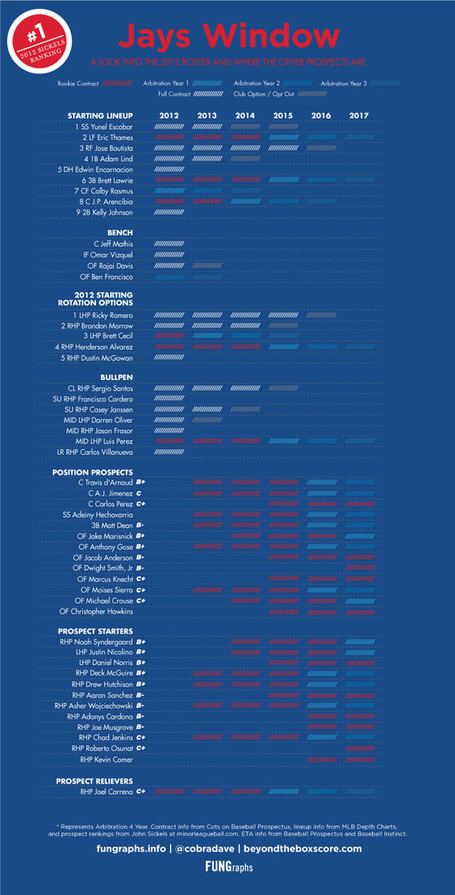 Twelfth in the series, we look at the Toronto Blue Jays. Ranked 1st overall by John Sickels, they have 15 B-rated prospects, 8 of which are B+. Here's what Keith Law had to say in his org rankings:

One of the many reasons criticism of Rogers Communications, the owner of the Blue Jays, for being stingy with free agents is so ignorant is that the club has spent aggressively in the amateur markets during the past three years, grabbing high-ceiling high school players and Latin American prospects by stockpiling picks and paying whatever it took to sign those players. They are the organization most likely to be No. 1 on this list next winter.

With so many highly ranked prospects in their system, can all their prospects hit at once and make a significant impact?

Most of their prospects will hit starting 2013 including top prospects C Travis d'Anaud and Anthony Gose. Here's what their 2012 lineup looks like:

5 out of 8 of their B+ prospects are pitchers including RHP Noah Syndergaard and LHP Justin Nicolino are set to come up in 2014 to join their starting rotation.

The heart of their lineup and top of their rotation is all locked up through 2014. Similarly to how the Rays snuck up on the entire AL East in 2008, the hope is that the Jays can do that or win one of the two wild cards this upcoming season. While they have impact bats in the lineup and if Morrow/Romero continues to rise, the window is open for them through possibly 2015.