A Graphic Look at the Window to Win: Kansas City Royals

Share All sharing options for: A Graphic Look at the Window to Win: Kansas City Royals 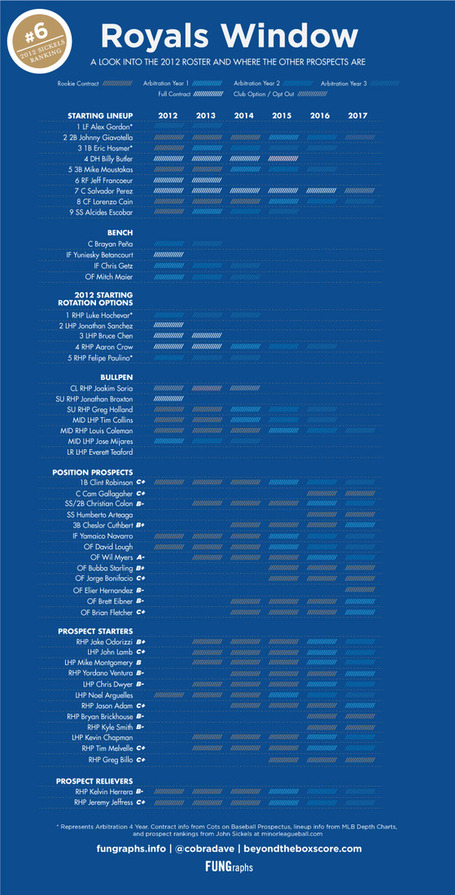 Sixth in the series, we look at the Kansas City Royals. Ranked 6th overall by John Sickels, they have 1 A-rated prospect in OF Wil Meyers, and a whopping 12 B-rated prospects. Looking at last years list from Sickels, it must be exciting to see two A-rated prospects in Eric Hosmer and Mike Moustakas producing early. Hosmer looked pretty dialed in last season, even outperforming Moustakas (Hosmer: wRC+ 114, Moustakas: wRC+ 85), but while two of their best prospects graduated from their systems, they remain pretty well stocked.

With their young studs, is their window open right now?

Their top prospect Myers will be ready as soon as late 2012 and could be fighting for Jeff Francoeur's RF spot very soon. In the most recent top 100 list from MLB.com, Myers was 19th. Here's what they said about his ceiling:

A good right-field prototype with a plus arm and the kind of bat that will be a major run producer in the middle of a lineup.

The top pitcher in their system, RHP Jake Odorizzi could come up in 2013 as a 2nd or 3rd starter, depending on what happens to Jonathan Sanchez or Bruce Chen this season. Considering the majority their prospects are pitchers, this rotation can possibly change quite a bit starting in 2013. Here's what the Royals are looking for their lineup starting the season:

Improving steadily by 4 wins last year, the arrivals of Hosmer and Moustakas is definitely promising, and exciting staples of their corner infield spots for years to come. Clay Davenport has them at 73 wins, a 2 win improvement, while the new MARCEL projections have them at 79. I believe they can get 79. With these projections in mind, and the arrivals of Myers and Odorizzi late this year or in 2013, looks like their window is starting to open in 2013.