A Graphic Look at the Window to Win: Minnesota Twins

Share All sharing options for: A Graphic Look at the Window to Win: Minnesota Twins 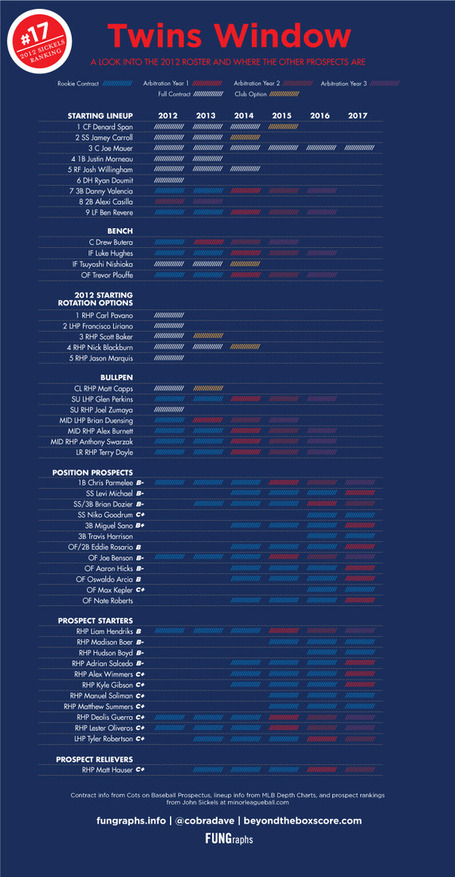 What does a middle-of-the-pack farm system mean in terms of affecting their window to compete?

While most of their 3/4 of their B-rated prospects are position players, only 4 of these guys, 1B Chris Parmelee, OF Joe Benson, and RHP Liam Hendriks, are set to see Target Field this season. Another one to note, SS/3B Brian Dozier will come up in 2013. The Joe Benson addition can lead to hopes of a 20-20 middle of the order bat/stud in the outfield. Here's what their 2012 lineup looks like:

Currently Scott Baker (2013 option) and Nick Blackburn (2014 option) are their only obligations past this season. While it's too early to see if some of the B-/C+ prospects coming up starting in 2013 will be a difference, it's obvious they need to make some moves to solidify their starting pitching after this season.

If the Twins can stay healthy and get some good contribution from Mauer and Morneau, they 'd be able to stay competitive with their current group otherwise wait till 2014 for their top prospects Miguel Sano, Eddie Rosario, and wild card Aaron Hicks can catch up and make a splash. It was just a couple years ago in 2010 that they've managed to win back-to-back division titles, so ignoring the disaster of the 2011 season, winning now isn't outside the realm of possibility.