Share All sharing options for: A Graphic Look at Replacing Runs in FA: Tampa Bay Rays 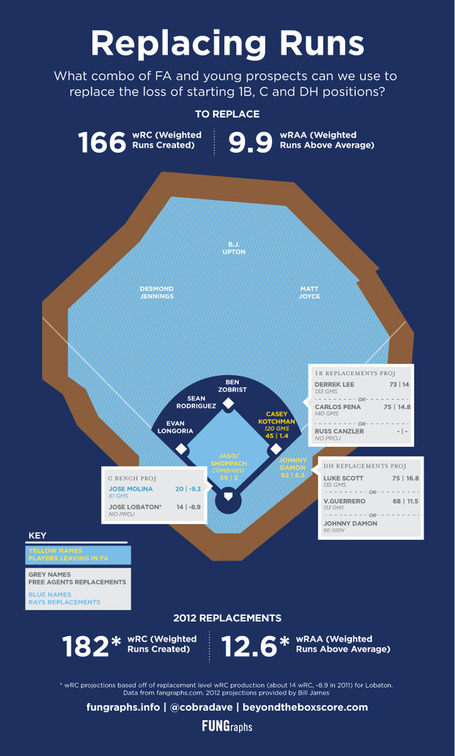 In the tenth and final graphic in the series, we look at how to replace runs the Tampa Bay Rays will be losing due to free agency. Not a team that will be making as any major moves this offseason, they need to fill holes left by both Casey Kotchman and Johnny Damon. Earlier in the offseason, John Jaso and Kelly Shoppach were replaced partially by Jose Molina.

Click after the jump to see how the Rays can stay competitive.

2012 Projections based off Bill James data on Fangraphs. ^ indicates improvement

At DRaysBay, they ask the question, Is Johnny Damon Worth Re-signing?. Short answer, yes. The other options I'd recommend at their price range, Vladimir Guerrero, and Luke Scott, all will produce similar wRC results.

See "Looking at the DH Options" at DRaysBay

The latest rumors in terms of both Casey Kotchman, and Damon, is that there's no action in terms of re-signing. Although Kotchman had a pretty good year in 2011, 79 wRC, his 2012 projection is much lower at 45 wRC. Now I'm not the best at guessing contracts, but assuming that Carlos Pena and Scott Boras would ask for more money than the Rays would like to pay. He did make $10M last year, but for less Derrek Lee could possible give you the same production. There was also discussion about this at DRaysBay.

Hope everyone enjoyed the series!