A Graphic Look at the Window to Win: Arizona Diamondbacks

Share All sharing options for: A Graphic Look at the Window to Win: Arizona Diamondbacks 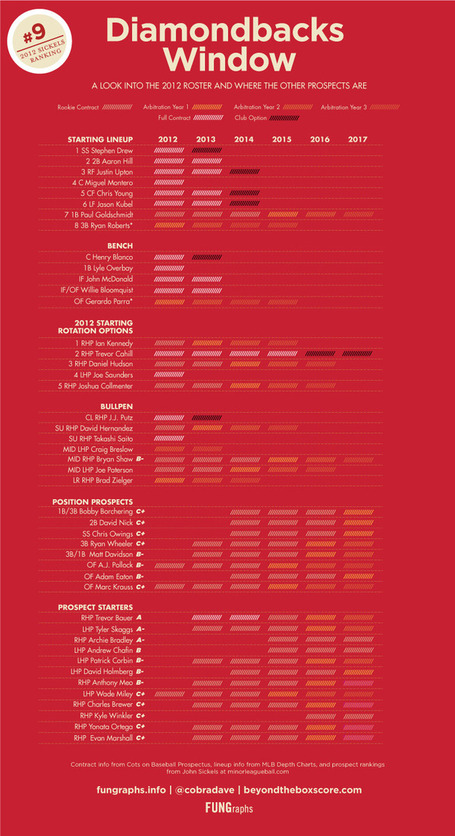 Tenth in the series, we look at the Arizona Diamondbacks. Ranked 9th overall by John Sickels, they have 3 A-rated prospects (all pitching) and 8 B-rated prospects. In Keith Law's organizational rankings released last week, he has them at #6 overall. What is really amazing is that 3 of their top prospects are rated in Keith Law's top 25:

With the Diamondbacks #6-ranked system, will their new acquisitions of Kubel and Cahill along with the arrival of more stud pitching be enough to keep them at the top of the NL West?

The Diamondbacks had a good offseason acquiring Trevor Cahill and Jason Kubel. During the Kubel pickup, there was some discussion on AZ Snakepit on the upgrade or lack of between Kubel/Parra. CAIRO projects Kubel (1.6 WAR) as 0.8 win upgrade over Parra (0.8 WAR).

Trading away Jarrod Parker shouldn't be a problem as they have 3 more top SP prospects coming up very soon. While Bradley/Bauer/Skaggs are will all set start the season in the minors, the addition of Cahill (2.9 WAR) to the top of their rotation will be an 1.7 win upgrade over Jarrod Parker(1.2 WAR) according to CAIRO. Here's what their lineup looks like:

We're looking at a possible 2.5 win upgrade with this squad. There's a lot of optimism after last season, and this 2.5 wins gained may just be enough (CAIRO has the D-Backs finishing second in the NL West by 1 game, but I believe it may be closer than that). Buster Olney even thinks they could take they can even make it to the World Series. Joe Saunder's 1-year contract opens up a rotation spot for Bauer or Skaggs next season. Baseball Instinct has them both coming out to the club sometime in 2012. I've listed in the graphic assuming they come up for only a portion of the 2012 season.

Piggybacking their success of the 2011 season, it's clear that this worst to first team has the pieces it needs to win now. . I should refer to a post from Jim McLennan at AZ Snakepit where he was the first to take a look at this and deem that the future is now.