Share All sharing options for: Do Spring Training Records Matter?

Spring training stats don't tell you anything. The players are rusty, the games don't count, and even the television carriers don't recognize some of the players. It's an easy mantra to adopt most of the year, but no matter how many times you mutter "small sample size" into a paper bag it's hard to convince yourself that your favorite team's ace isn't in for a year of constant implosions after he walks two batters in his first appearance of the preseason.

Such overreactions are human nature. We long to find patterns where they don't actually exist and make grandiose storylines out of minutia. Combine that with the emotional outburst we all experience when some form of baseball finally comes back and it's no wonder we curl up into the fetal position when our teams start spring training 0-3.

Are such reactions wholly unwarranted? Obviously preseason numbers won't tell you much, but that doesn't mean you can't gain some knowledge from them—one game isn't enough to differentiate between a .280 hitter and a .300 hitter, but no matter how small the sample size the better player is expected to enjoy greater success. So just how much do teams' spring training results tell us about the upcoming season?

In an attempt to answer the question, I pulled the Grapefruit and Cactus Leagues win-loss records from the 2007 through 2011 and matched each team's preseason record with its regular-season record. The result: a positive correlation of .325 with an R2 of .105. In other words, about 11 percent of a team's talent level is reflected in its spring training record. It's not a very strong relationship, but it does exist.

Here's how the data look graphically. I've highlighted each year's World Series winner in red and some notable outliers in green. (click to embiggen) 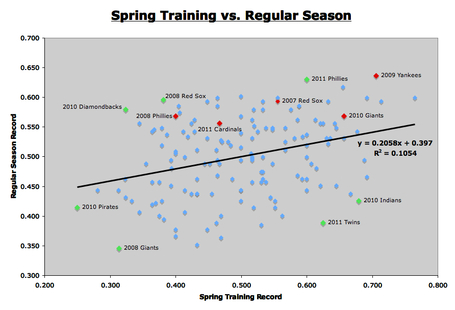 Note that many of the outliers' performances didn't differ that drastically between spring training and the regular season. The 2007 Red Sox and 2011 Phillies, for example, had roughly the same record in April, May, etc. that they did in March, yet that puts them way over the trendline because of how weak the relationship is.

So what's the takeaway here? Don't fret if your favorite team gets slaughtered in spring training (a la the 2010 Diamondbacks), nor should you uncork the champagne after a red-hot preseason (see my 2010 Indians). But better teams are always more likely to win games, and the Grapefruit and Cactus League standings offer us at least cloudy window into the season to come.