A Graphic Look at the Window to Win: Cincinnati Reds

Share All sharing options for: A Graphic Look at the Window to Win: Cincinnati Reds 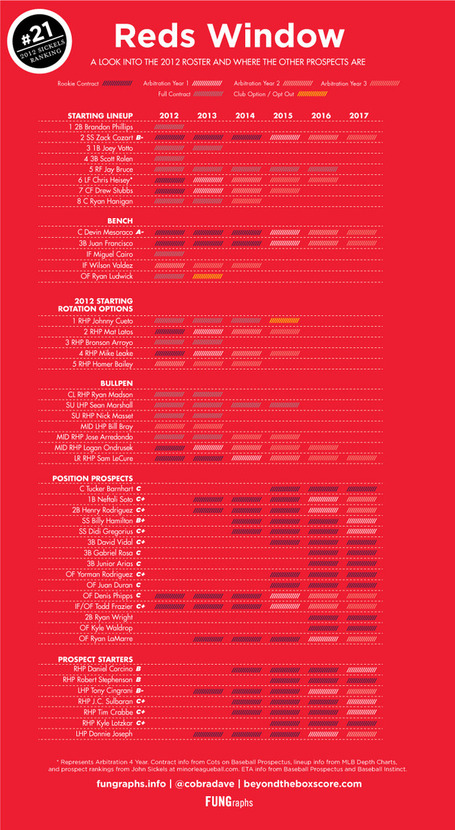 24th in the series (we're almost through all the teams!), we look at the Cincinnati Reds. We have a team ranked 21st overall by John Sickels with 1 A-rated prospect and 5 B-rated prospects. Of course, they would have been ranked higher before trading away a number of their top prospects in return for P Mat Latos. They rank 18th in Kevin Goldstein rankings and 19th in Keith Law's 2012 organizational rankings. Law believes that this was a potential top-10 system before the trade. For those of you who were skeptics about the trade, Goldstein brought up a good point in his rankings:

After acquiring Latos and closer Ryan Madson this offseason, are the Reds window finally opening in the NL Central?

Letting C Ramon Hernandez walk this offseason opened up the postion for the eventual promotion of top prospect C Devin Mesoraco. Mesoraco will temporaily share time with C Ryan Hanigan, but it's clear the future is with Mesoraco at starting catcher. Using WARP, PECOTA projects Hanigan/Mesoraco combo to excel. Lets compare to what Hernandez would have done:

Seems like quite the upgrade. Here's what the Reds roster projects to be in 2012:

The upgrade of Latos in the rotation should be a projected 3.7 WARP. Finishing with only 79 wins was a bit of a disspointment, but surely with the upgrades, they should improve on that easily. The oh so early CAIRO projected standings from last month had the Reds at 87 wins, one win away from the second wild card berth.

Jonah Keri agrees on the optimism in the end of his Reds season preview by saying:

The Reds vie for their first World Series title in 22 years. No, really. You can go to war with Cueto and Latos at the top of your rotation, one of the best lefty-righty bullpen combos in the game in Marshall and Madson, Votto scaring the bejesus out of even the most dominant pitchers, and a supporting cast that gets better-than-expected results out of Bruce, Stubbs, and the catchers, with Phillips and Rolen holding their own.

With the changes this offseason, if the Reds can live up the to 87 win projection, it appears that the window for them to win is opening. Now all they need to do is make sure they can figure out if they're able to re-sign both 2B Brandon Phillips and 1B Joey Votto to extensions or find viable solutions.