A Graphic Look at the Window to Win: New York Yankees

Share All sharing options for: A Graphic Look at the Window to Win: New York Yankees 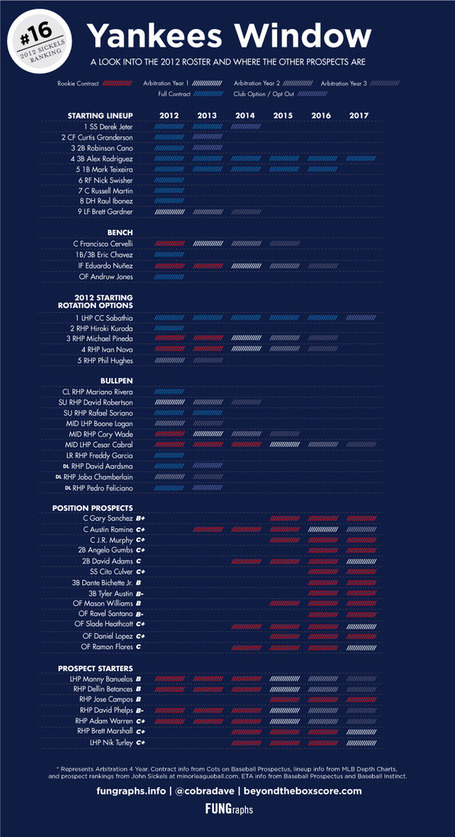 20th in the series, we look at the New York Yankees. Ranked 16th overall by John Sickels, they have no A-rated prospects but 9 B-rated prospects. Keith Law's 2012 organizational rankings sees their farm slightly better at 10th overall. He is a bit optimistic about their lower level prospects:

I might be jumping the gun here, but I see a lot of star potential on their bottom few affiliates, including new acquisition Jose Campos from Seattle, to go with the two power arms from their Scranton club (Manny Banuelos and Dellin Betances). The flaw in the system is the lack of near-in talent, especially position players, who could either help the big club soon or provide more fodder for trades.

As we start looking at these perrenial playoff contending teams, rather than just the smaller payroll teams I've covered before, the question about the window changes. How long does the Yankees window stay open? Will their inability to stay under the future cap and lack of flexibility with payroll hurt them? When do they chances to win the AL East, or the wild card, start to diminish?

Their lineup will likely remain similar for the next couple of years with the exception of the DH, but after the 2013 season, maybe even before, Brian Cashman will need to figure out what to do with OF Curtis Granderson and 2B Robinson Cano. Currently, the Yankees are getting a good deal with those two contracts, but likely the extensions will cost them. Jon Heyman reported today that team president Randy Levine intends to retain both Cano and Granderson. Something they do have taken care of, is at least the top of the rotation, which is something that was uncertain last season.

Here's what the Yankees roster projects to be in 2012:

Although the arrival of C Gary Sanchez is still a few years away (2015), will they re-sign C Russell Martin (3.0 WAR last season)? Currently, according the the NY Daily News, they're not that close yet to a deal. Last season seemed to have been a pretty good showing for C Francisco Cervelli, even only with 137 PA. With Brian McCann, Mike Napoli, Miguel Montero, and Chris Ianetta possibly becoming free agents next year, either Martin's value will be dictated by the above, or the Yankees might be able to sign him to a good deal due to the saturation.

If the bottom of the rotation looks murky come midseason, top prospect P Manny Banuelos and P Dellin Betances can be starting options right away. If the Yankees can figure out the Granderson and Cano contracts, it looks as is the window can stay open for the Yankees at least into 2015.