A Graphic Look at the Window to Win: Washington Nationals

Share All sharing options for: A Graphic Look at the Window to Win: Washington Nationals 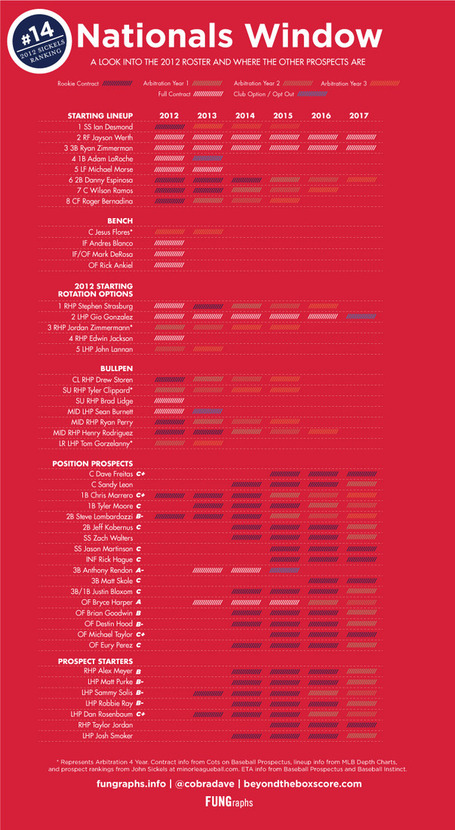 Fourteenth in the series, we look at the Washington Nationals. Ranked 14th overall by John Sickels, they have 2 A-rated prospects and 7 B-rated prospects. Before the trade with the A's, they would have been ranked much higher, but after losing 4 of their original top-ten, they're in the middle-of-the-pack. Keith Law's 2012 organizational rankings sees the Nationals farm as 21st overall.

This was potentially a top-10 system before the Gio Gonzalez trade, no worse than top 15. But after dealing A.J. Cole, Brad Peacock and Derek Norris -- probably three of the Nats' top 10 guys before the Gio swap -- this system lacks depth.

With their offseason starting pitching improvements, is their window opening now?

Making a big jump from their 2010 69-93 season, the Nationals finished 80-81 and are poised to improve this year. They made big moves to locking up their future by extending 3B Ryan Zimmerman's contract through 2019, with a 2010 option. The Nationals are making strides to really putting up a winning team for the next few years. Here's what their 2012 lineup looks like:

Another year of big league experience for C Wilson Ramos, 2B Danny Espinosa and OF Michael Morse will hopefully lead to added production. A good thing to note is the additions of Gio Gonzalez, Edwin Jackson, and a healthy partial season from Stephen Strasburg should lead to around 8.2 additional wins according to PECOTA.

Just in that surface level look, the Nationals can be looking at about a 89-90 win season. CAIRO has them at 86 wins, which puts them in 2nd place in the NL East.

Aside from extending Strasburg, R. Zimmerman, and possibly Michael Morse, it looks like the Nationals window is now. Sneak up on the Phillies for the NL East title or try for one of two wild cards.

Note: For Strasburg, his first contract is up this season, but is under team control until 2016.