Share All sharing options for: A Graphic Look on Replacing Runs in FA: Los Angeles Dodgers 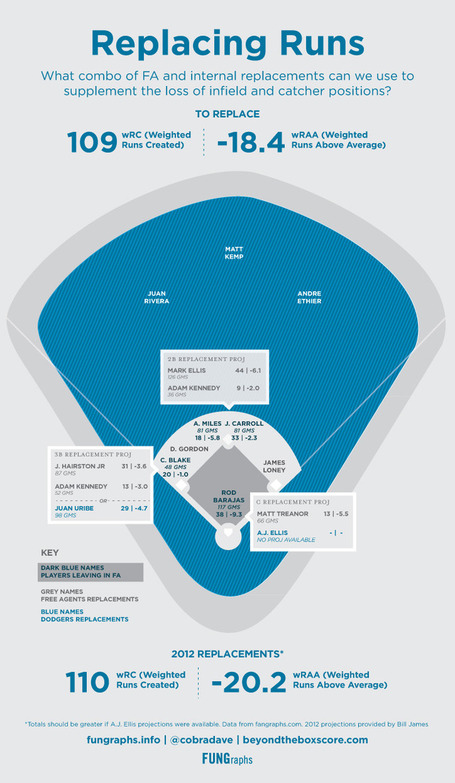 In the ninth graphic in the series, we look at how to replace runs the Los Angeles Dodgers will be losing due to free agency. While not really making big splashes this offseason, they did manage to get a deal done with Matt Kemp, while also filling some holes in their IF and C positions.

Click after the jump to see how the Dodgers can stay competitive.

Making a move to on signing Mark Ellis early into free agency should be a good move. While Ellis's numbers last year were rather low (45 wRC / 70 wRC+), Aaron Miles had very similar numbers in 2011 (45 wRC / 83 wRC+). Ellis projects slightly better than Miles and I'm going to assume that the signing was based Ellis's top 10 defense at his position in 2011 (based on UZR). Since the 2B position was occupied by both Aaron Miles and Jamey Carroll, the combo of Ellis and newly signed Adam Kennedy is virtually identical. As Fangraphs covered last month, this bunch might have a little trouble scoring runs.

2012 Projections based off Bill James data on Fangraphs. ^ indicates improvement

At 3B, if Casey Blake would be healthy for an entire season, his production would be pretty good, but with Bill James projections listing him at only 48 games, picking up super utility dude Jerry Hairston Jr. was a good move.

Looking at the catcher position, re-signing a 36-year-old Rod Barajas might have cost a little too much for his projected 38 wRC, but a cheaper, also 36-year-old, Matt Treanor and A.J. Ellis might be able to come up with similar results. Unfortunately, there's no Bill James projections for A.J. Ellis, we can always defer to a different projection, ZiPS. Never hurts to compare these things, especially since the BIll James numbers looks slightly higher at times. We can look at their OPS+ just as a somewhat similar point of reference (ZiPS doesn't offer wRC numbers)