Share All sharing options for: Triples And Steals: Two Types Of Speed

While the fastest players tend to have a lot of stolen bases and a lot of triples and the slowest hitters tend to have hardly any of either, triples and steals are not quite directly correlated. Some players have very high triple rates with below-average steal rates (and vice-versa).

The graphic below spotlights a few of these players on a scatterplot of all hitters in the past 30 seasons (minimum 2000 PAs). Click the graphic to enlargenize if you wish. 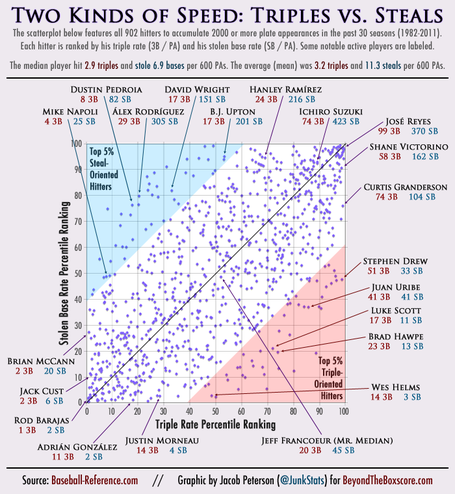 Let's start with the most steal-oriented hitters. Below, I've listed the 6 hitters with the lowest triple rankings among those who rank in the 90th percentile or higher in steals. Remember, this is just since 1982, so for some hitters, the early years of their career may be missing:

That's right: the greatest base-stealer of all time hit triples at a slightly below average rate. For his entire career (his first 3 seasons aren't included above), Rickey hit 66 triples. That's about 3 per 600 PAs--or right about the MLB average. It's a similar story for Otis Nixon, too.

Meanwhile, I have no idea what was going on with Chad Curtis. He had 212 steals in his career but just 16 triples. That's the second-fewest triples of any 200-steal player in MLB history (Jose Canseco had just 14 triples and exactly 200 steals).

Next up, here are the hitters with the worst stolen-base rankings out of those who ranked in the top 10% in triple rate:

Finally, here are some players whose rankings are similar in each category--in other words, who are equally fast or slow in either category.

That's a pretty nice gradient from "slowest" to "fastest," I'd say.

If anyone has any explanations for why certain players are more triple-oriented and others are more steal-oriented, I'd like to hear them. What do the players in the lists above have in common?

Also, if you'd like to know where a certain player ranks in each area, you can let me know in the comments and I'll try to get to it. Thanks for reading.