A Graphic Look at the Window to Win: St. Louis Cardinals

Share All sharing options for: A Graphic Look at the Window to Win: St. Louis Cardinals 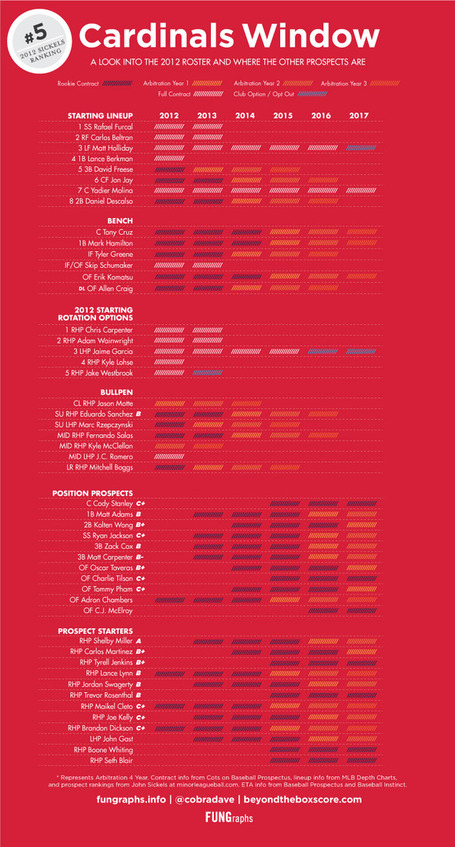 23rd in the series, we look at the St Louis Cardinals. We have a team ranked 5th overall by John Sickels, they have 1 A-rated prospects and 10 B-rated prospects. They rank 3rd in Kevin Goldstein rankings and 4th in Keith Law's 2012 organizational rankings. An interesting thing to note is their depth, Law notes:

They've drafted very well in the past few years, which has to be heartening to Astros fans, as Houston just hired Jeff Luhnow, who oversaw the Cards' recent drafts, as GM. St. Louis also has done an excellent job of developing the players it's drafted. I really like how the Cards are set up to contend continuously during the next five years.

As we start looking at these perennial playoff contending teams rather than just the smaller payroll teams I've covered before, the question about the window changes. You're probably asking the question, why would this matter since the Cardinals had just won the World Series? I ask, does the future Cardinals squad continue to contend in the NL Central and does their window stay open for at least a few more years?

Back in December, we had taken a look at how to replace some of the runs lost to FA, more specifically in this case, how to replace production lost due to 1B Albert Pujols leaving to the Angels. No one player could do this, but as we had found, a few players can combine to replace some of the lost production. The signing of C Yadier Molina and the pickup of P Adam Wainwright's options, signal a commitment to keep this championship squad at least somewhat intact.

Here's what the Cardinals roster projects to be in 2012:

They'll have some starting pitching help as soon as this year as P Shelby Miller could come up sometime late this season. I'm not sure what lies in the future for their top of the rotation past the 2013 season, but a tandem of both top prospects MIller and P Carlos Martinez could be the future of their rotation. If not Martinez as a frontline starter, they have P Tyrell Jenkins ready for the call in 2015.

Jonah Keri summed it up best at the end of his Cardinals season preview by saying:

Wainwright, Freese, and Miller are the obvious reasons for optimism. But don't forget the multiple games the Cards frittered away early last season, when Ryan Franklin(?) and Miguel Batista(?!?!?) were anchoring the back end of the bullpen. Full seasons in high-leverage roles for Jason Motte, Eduardo Sanchez, Fernando Salas, Lance Lynn, and Marc Rzepczynski could make a big difference, improving a pitching staff that was already solid in 2011 (eighth in MLB with a 3.75 team FIP). Ninety-five wins are actually possible. Yup, that would be five more than last year.

As Keri said, if the top of the rotation can hold it together and also RF Carlos Beltran and 1B Lance Berkman can similarly produce offensively, the Cardinals window will be easily open for the next couple of years, and possibly beyond depending on their top prospects.