A Graphic Look at the Window to Win: Atlanta Braves

Share All sharing options for: A Graphic Look at the Window to Win: Atlanta Braves 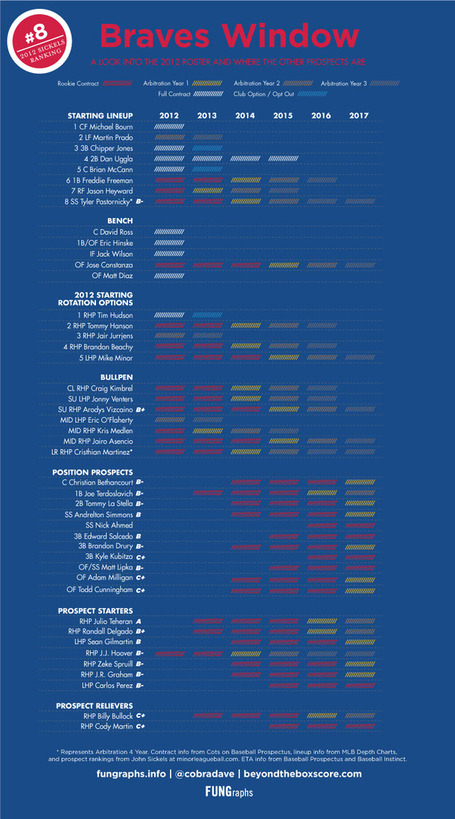 Thirteenth in the series, we look at the Atlanta Braves. Ranked 8th overall by John Sickels, they have 1 A-rated prospect and 15 B-rated prospects. Keith Law's 2012 organizational rankings sees their system as middle-of-the-pack at 16th overall.

Can their great pitching depth help the Braves chances to contend for years to come?

Aside from the September collapse, the Braves still won 89 games last year. As Jayson Stark wrote yesterday, the Braves have decided not to makes moves this offseason.

A lot of the current prospects in the system will hit starting 2014. Something to be excited about this season is the debut for RHP Arodys Vizcaino and maybe even top prospect RHP Julio Teheran. Here's what their 2012 lineup looks like:

With the hopes that if they improve their about average wRC+ (90) this season, their pitching can certainly continue to carry them. They may look at re-signing OF Michael Bourn, C Brian McCann along with starters RHP Tim Hudson and RHP Jair Jurrjens

The rotation should stay solid for years to come. Sickels said about their rotation:

As usual, the pitching is rich in this system, with three potential rotation anchors in Teheran, Vizcaino, and Delgado. Gilmartin, Hoover, and Spruill are also capable of becoming solid major league starting pitchers, although it looks like Hoover will end up in relief, at least in the short run.

I see the Braves remaining in striking distance through 2015, but in the case they don't re-sign the players mentioned above, hopefully they can win by end of 2013.