A Graphic Look at the Window to Win: Philadelphia Phillies

Share All sharing options for: A Graphic Look at the Window to Win: Philadelphia Phillies 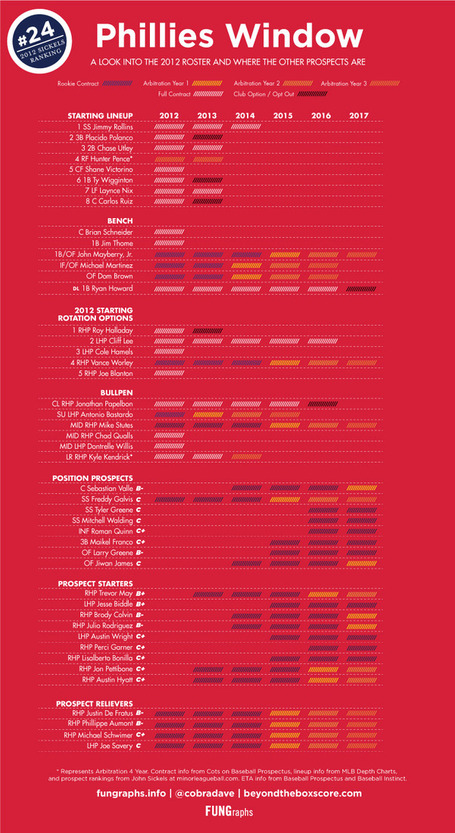 17th in the series, we look at the Philadelphia Phillies. Ranked 24th overall by John Sickels, they have no A-rated prospects but 8 B-rated prospects. Keith Law's 2012 organizational rankings sees their system at 25th overall.

As we start looking at these perrenial playoff contending teams, rather than just the smaller payroll teams I've covered before, the question about the window changes. How long does the Phillies window stay open? Or to be more specific, when do they chances start to diminish?

After an historic 102-win season in 2011, the Phillies didn't drastically improve this offseason, but signing of closer Jonathan Papelbon (3.0 WAR in 2011) should help replace some potential wins lost due to the Ryan Howard injury (1.6 WAR in 2011). This is a good signing if you look at Fangraphs "Dollars" metric which calculates the price of production in FA. Papelbon was worth $13.2 million last season, so $11 million this year, and $13 million the following is just how much it costs for lights out guys like Papelbon. Just out of curiosity, here's his stats compared to the pitchers who played the closer in the Phillies 2011 staff:

Here's what the Phillies roster projects to be in 2012:

At the end of this season, Ruben Amaro will have to figure out what to do with OF Shane Victorino and P Cole Hamels. I imagine if they both build off of their 2011 career seasons (Victorino: 5.9 WAR, Hamels: 4.9 WAR), new contracts should be in line for at least one of these two. It's very clear that this team is built to win now. With Victorino/Hamels going into FA next season,and the uncertainty with a bulk of contracts up at the end of next season, their window to win is through 2013.

I would put all my eggs into the 2012 basket and try to squeeze at least another ring out of some of these veterans.