Share All sharing options for: The Red Sox Hall of wWAR: A Baseball Hack Day Project 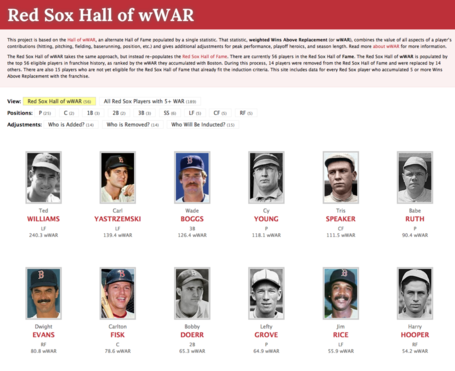 On Saturday, I took part in the very first Baseball Hack Day hosted by The Boston Globe (and sponsored by The Globe, Boston.com, Hacks/Hackers Boston, and SABR). What's a "hack day"? It's a get-together of like-minded folks (in this case, baseball fans) who combine their varied skills (design, programming, visualization, content development, etc.) to build some cool things over the course of a day. Some "teams" are created that day while others plan a project in advance. I planned mine in advance and worked with my friends Jeffrey Chupp and Adam Bailey.

I've been meaning to coax Jeffrey into helping me build Ruby on Rails backend for the Hall of wWAR so I could create new visuals more quickly. Refactoring an existing project, however, isn't really in the "hack day" spirit. Instead, I decided to build something else on top of that framework I want so badly. As a result, we created a new Hall of wWAR based The Local Nine—the Red Sox Hall of wWAR.

So, take a look and tell me what you think. The project was a lot of fun to work on. I look forward to using the new framework to make even more visualizations.