A Graphic Look at the Window to Win: Milwaukee Brewers

Share All sharing options for: A Graphic Look at the Window to Win: Milwaukee Brewers 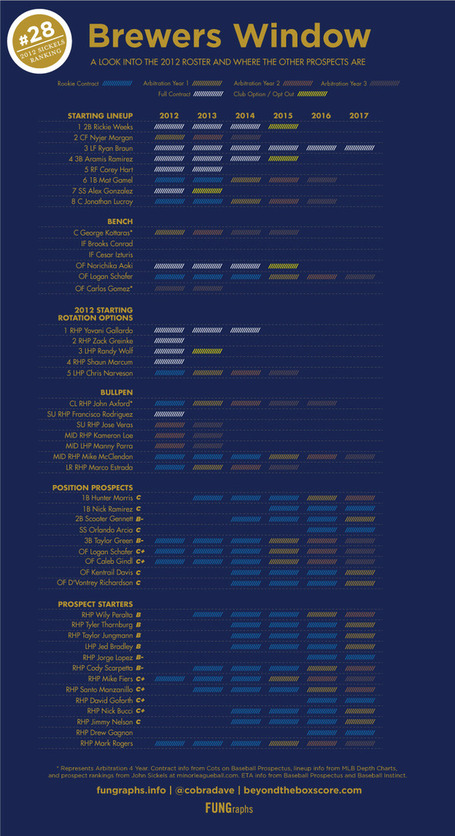 27th in the series (we're almost through all the teams!), we look at the Milwaukee Brewers. We have a team ranked 28th overall by John Sickels with no A-rated prospects and 7 B-rated prospects. They rank 28th in Kevin Goldstein rankings and 23rd in Keith Law's 2012 organizational rankings. Law does have a bit of optimism about the system:

A strong 2011 draft class with a few breakout performers from within the system gets them out of the bottom spot. The Brewers are in better position to reload the parent club after their 2012 free agents leave next winter.

The core of this team hasn't changed, but losing 1B Prince Fielder this season is certainly a notable loss. Back in December, I had took a look at this in my Replacing Runs series and noted that the projected wRC lost from Fielder (41.3) can be replaced by a combination of 3B Aramis Ramirez (20.5 wRC) and 1B Mat Gamel (15.7 wRC). Obviously, no one player can replace Fielder for the Brewers, but hopefully this combo will do.

With this in mind, does the window continue to stay open for the Brewers, especially since division rivals and World Series champs, wire in similar dire straits?

Last years Brewers won a franchise-best 96 games. The Cardinals were behind them winning the wild card with 90 wins. Both CAIRO and Baseball Prospectus project the Brewers to win about 10 less games this season, but they're still within striking distance. Unfortunately, 86 games might not be enough even to make it to the 2nd wild card, but with a little bit a division luck, they should be ok.

Here's what the Brewers roster projects to be in 2012:

Their starting lineup is set for the next two seasons, but the Brewers will have to figure out what to do with P Zack Grienke and P Shawn Marcum after this season. Grienke re-signing seems like a must in a division with weak pitching as noted by the Chicago Tribune, but hopefully Ryan Braun, Grienke's faux agent will help him get a deal done soon.

They do have some pitching coming up, as two of their top prospects, P Wily Peralta and P Tyler Thornburg are set to come up late this season and next season respectively.

I believe the Brewers need to make sure to capitalize now as it's a matter of time before the Reds and Pirates make a run for the NL Central title. The window is obviously open, but is starting to close as soon as 2013.