A Graphic Look at the Window to Win: Tampa Bay Rays

Share All sharing options for: A Graphic Look at the Window to Win: Tampa Bay Rays 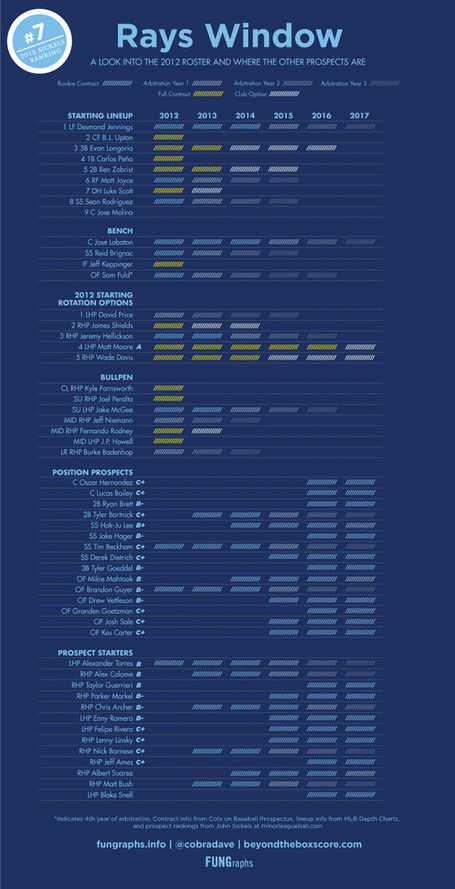 Eleventh in the series, we look at the Tampa Bay Rays. Ranked 7th overall by John Sickels, they have 1 A-rated prospects and 12 B-rated prospects. Keith Law sees them much higher in his organizational rankings released last week putting them at #2 overall. Here's what he had to say:

If you favor ceiling over probability, you could make a strong argument for having the Rays ahead of the Padres, based on the fact that this system could quite easily produce six to eight players who end up as grade-60 players or better in the majors. After that first tier, however, there's a lot less probability here than there was a year or two ago, and several executives from other clubs pointed out that the Rays have a gap in their prospect pipeline coming up that will be filled only if some of their 2011 draft picks move faster than anticipated.

This Rays graphic is slightly different than the others since they clearly are within a window to win. The question for them is how long this stays open for them?

Going back to the Sickels rankings, the Rays have both 6 B-rated position and 6-B-rated pitching prospects which should be making their debut by the 2014 season, highlighted by SS Ha-Ju Lee in 2014. Here's what their 2012 lineup looks like:

As one of the best shortshop prospects, Lee will be coming up as Sean Rodriguez goes into his 2nd arbitration year. Their top pitching prospects behind Moore LHP Alexander Torres, Alex Colome and Chris Archer will be up sometime in the next two years (Torres will be up this season).

With their starting pitching locked up for the next 3 years as well as their position players not named Upton, their lineup looks pretty solid with the majority of their new prospects coming up starting next year. It remains to be seen if Brandon Guyer can slip into a starting OF role next season, but the Rays window looks open for the foreseeable future.