A Graphic Look at the Window to Win: Texas Rangers

Share All sharing options for: A Graphic Look at the Window to Win: Texas Rangers 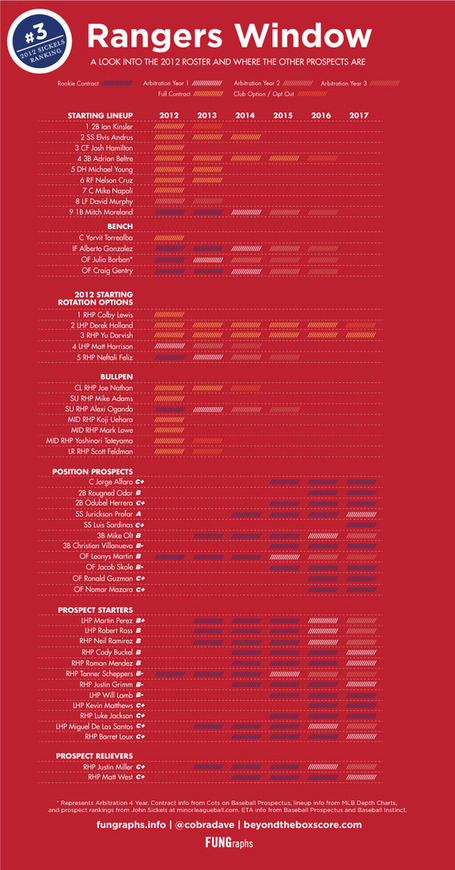 25th in the series (we're almost through all the teams!), we look at the Texas Rangers. We have a team ranked 3rd overall by John Sickels with 1 A-rated prospect and 13 B-rated prospects. There's incredible depth, slightly leaning more on pitching than hitting. They rank 6th in Kevin Goldstein rankings and 7th in Keith Law's 2012 organizational rankings. Sickels rating is the only one that included P Yu Darvish as a prospect. Here's what Law has to say about their system and Darvish being excluded:

The Rangers have ranked highly the past few years -- including No. 1 once -- because of depth and ceiling, but they're now more about the latter than the former. (Note that I don't consider Yu Darvish or any player with Nippon Professional Baseball experience a "prospect" for the purpose of this ranking or the top 100.)

As we start looking at these perennial playoff contending teams rather than just the smaller payroll teams I've covered before, the question about the window changes. You're probably asking the question, why would this matter since the Rangers made it to the World Series two years in a row? Do they stay strong in the same division as the Angels and prospect-heavy Athletics and Mariners?

Here's what the Rangers roster projects to be in 2012:

Their top prospect, SS Jurickson Profar, a potential all-star, has an ETA of 2014. He eventually take over the starting SS role from Elvis Andrus when he comes up. Rangers blog Nolin Writin wrote about the future of the SS position last month and brought up a good point about the timeline:

If everything progresses as to track Profar will be in AAA Round Rock during the last year of Andrus’ contract. The Rangers won’t and shouldn’t keep two talents of that level at the same position. It would be in the best interest of the Rangers to trade him during the 2014 season for as much as they can get for him. If Andrus is allowed to become a free agent after 2014 he will not be coming back, and the price that he will be demanding will be enormous. What Ranger nation must prepare itself for is that time in the future when Elvis isn’t there. But for now enjoy him, I think he will come back at the same offensive level, if not better and much better defensively.

World Series berth and all in 2011, the Rangers finished with 96 wins and the AL West crown. The Baseball Prospectus projected standings has them finishing at about the same, but with 2 more wins, totaling 98.

If they can live up to their projections, the Rangers have a good chance at making it to the World Series again. The window is open until at least through the 2013 season. Much like I've mentioned in a few other projections, this depends on the future of OF Josh Hamilton and C Mike Napoli. If they both perform as they should this season, at least one should get an extension.