A Graphic Look at the Window to Win: New York Mets

Share All sharing options for: A Graphic Look at the Window to Win: New York Mets 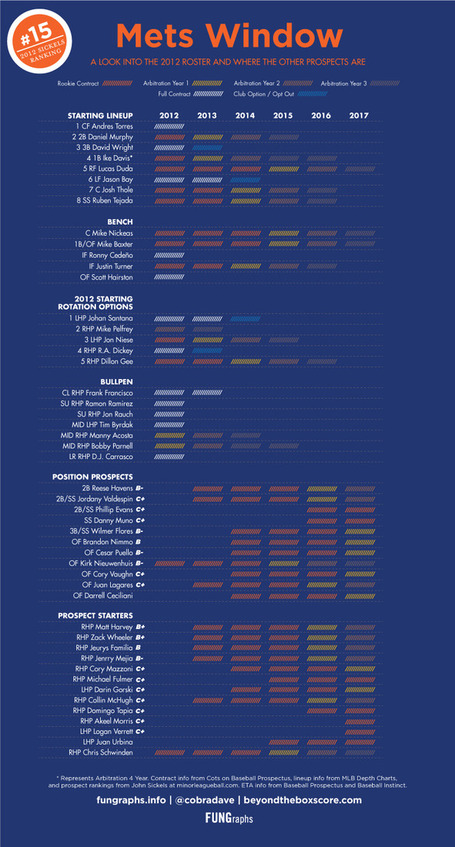 15th in the series, we look at the New York Mets. Ranked 15th overall by John Sickels, they have no A-rated prospects but 9 B-rated prospects. Keith Law's 2012 organizational rankings sees their system lower at 22nd overall. As Ed Valentine noted in his piece early this month, it's interesting to see how Sickels and Law vary in opinion regarding their rankings.

Sandy Alderson is in the building and ready to tackle the task of rebuiid. Just about how long will it be before the Mets are best aligned to win again?

For a team that lost about $70 million last year, Alderson temporailty has his hands tied in terms of payroll. According to ESPN, they look to trim their payroll by $50 million, and once Santana and Bay's contracts are off the books (combined $42 million this year), they should be able to make some moves that can help put this rebuild on hopefully the fast track. Here's what their 2012 lineup looks like:

A good thing to look forward is the majority of their prospects start coming up next season including the top 3 prospects: #1 Matt Harvey, #2 Zack Wheeler and #3 Jeurys Familia, along with mega contracts coming off the books in 2014 lead to their window to win opening once again.