A Graphic Look at the Window to Win: Chicago Cubs

Share All sharing options for: A Graphic Look at the Window to Win: Chicago Cubs 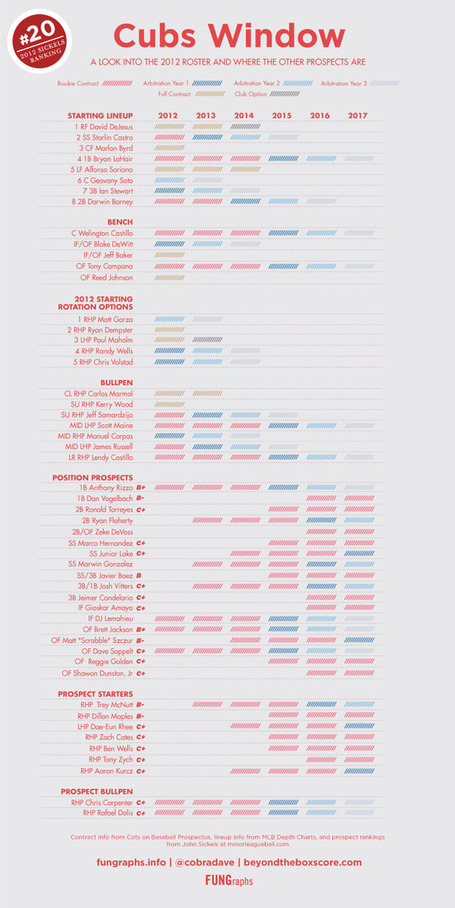 Fourth in this series, we look at the Chicago Cubs. Ranked 20th overall by John Sickels, they have 3 B-rated prospects in 1B Anthony Rizzo, OF Brett Jackson, and 1B Dan Vogelbach and 2 B-rated pitchers on their way (RHP Trey McNutt and RHP Dillon Maples).

With rebuilding the philosophy moving forward, when are the Cubs best set up to compete?

#1 and #2 prospects in their system, OF Brett Jackson and 1B Anthony Rizzo will both possibly make their way up some time this season. Being their sole B+ prospects, the Cubs should hope they grow into cornerstones in their respective positions. In this past year's draft, they look like they got a pretty good prospect in SS/3B Javier Baez. Sickels says in his 2012 report:

Outstanding bat speed, should hit for average and power. Questions revolve around future position as well as volatile personality. Higher ceiling than Jackson or Rizzo but we need to clear these issues up first.

Baez if all goes according to plans, will make it right as Ian Stewart's contract is up at the end of 2014. Here's what they're looking at for 2012:

Cubs fans, correct me if I'm wrong, but it looks like aside from Jackson and RIzzo, there's not much in terms of quality prospects in AA/AAA. According to Cots, in 2014, their only non-arbitration-eligible contracts will be those of Alfonso Soriano ($19M, ouch!) and David DeJesus ($1.5M). It seems most likely sometime in or around 2014 when RHP Trey McNutt and OF Matt Szczur will be on their way up, will be when their window starts.

See the previous graphics in this series: Mariners | Athletics | Astros