A Graphic Look at the Window to Win: Chicago White Sox

Share All sharing options for: A Graphic Look at the Window to Win: Chicago White Sox 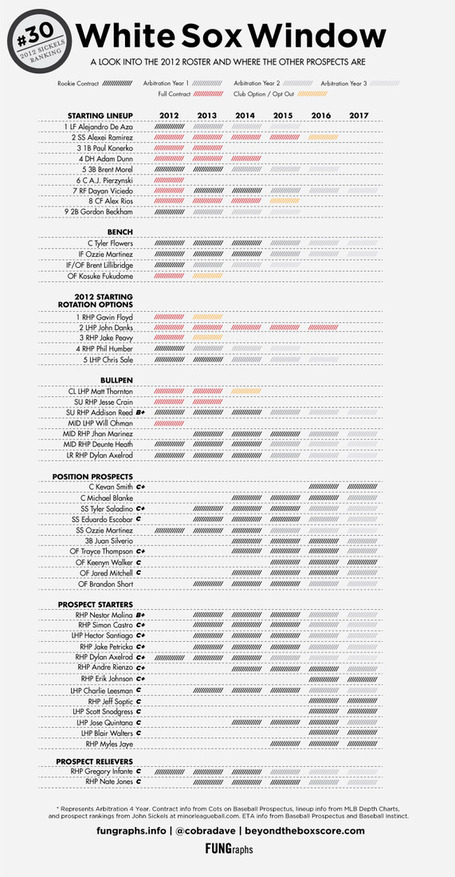 21st in the series, we look at the Chicago White Sox. We have a team ranked 30th overall by John Sickels, they have no A-rated prospects and only 2 B-rated prospects. In both Keith Law's 2012 organizational rankings and the newly released Kevin Goldstein rankings, they're also unfortunately listed dead last. Here's some notes from John Sickels:

You have two B+ pitching prospects in Addison Reed and Nestor Molina and some other raw materials for a decent bullpen. Hitting is a disaster. I like Tyler Saladino but I have huge doubts about their other hitting prospects.

With the farm system that needs a little bit of help, when does the White Sox window open again?

As many were also surprised, the White Sox decided to bring back P John Danks with a $65/5yr contract. One would think while it appears that they need to rebuild, re-signing a pitching for nearly $16M/yr isn't the best use of their money, but it may be I'm just thinking with a small-market mind. News came out today from MLB Trade Rumors that the Blue Jays are pursuing P Gavin Floyd, so maybe they can link up with their friends the Jays for another trade this offseason.

Here's what the White Sox roster projects to be in 2012:

With the downside of the system, P Addison Reed will be a their future closer and P Nestor Molina, acquired from the P Sergio Santos trade, can come in next season possibly to take the number two spot in the rotation. Their pitching should be good with Danks and Floyd plus a solid bullpen, but the offense has some things to figure out.

A note from Jonah Keri's season preview about the White Sox:

Dunn and Rios offer painful reminders of the $82 million they're owed over the next three years, Beckham continues to struggle, Viciedo doesn't hit as hoped, Peavy gets hurt again, and even the indomitable Paul Konerko finally starts to slow down at age 36. A last-place finish in year one of the Ventura era is a real possibility.

Certainly with Floyd and Peavy on the final year of the contracts (options next year), they can make some moves next offseason to fill in some of the holes they maybe discover during the season. It's unclear when their window will be open again, but if the prediction from our very own Lewie Pollis of Brett Morel being the next next Jose Bautista holds true, hopefully the window will be open just as he goes into his arbitration years in 2014.