A Graphic Look at the Window to Win: Colorado Rockies

Share All sharing options for: A Graphic Look at the Window to Win: Colorado Rockies 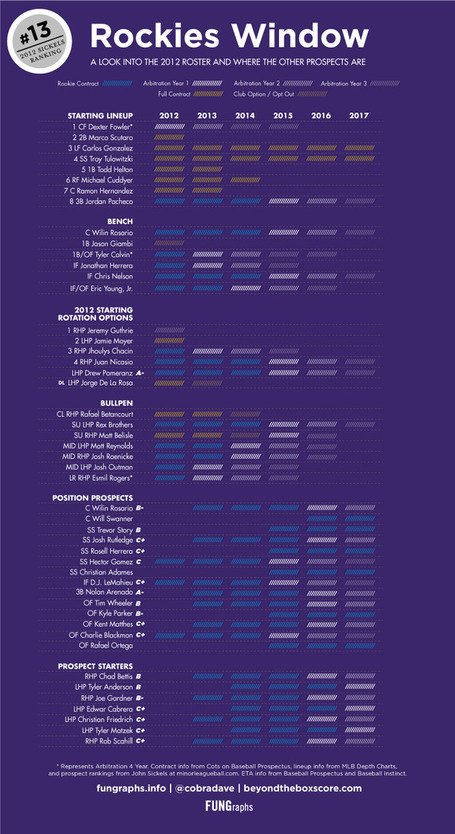 29th in the series, we look at the Colorado Rockies. We have a team ranked 13th overall by John Sickels with 2 A-rated prospects, and 7 B-rated prospects. Their system is ranked similar in all three rankings we looked at; 14th in Kevin Goldstein rankings and 13th in Keith Law's 2012 organizational rankings. Law system slightly underrated:

This is an underrated system, maybe even here by me. I like systems in which the prospects in the No. 8-12 range are just as interesting (if not as high-upside or high-probability) as the prospects in the No. 1-4 range, and the Rockies' lack of a complex-league team can make some of their youngest prospects look less advanced than they are when they jump right to the Pioneer League.

In a division now lead by the Giants and Diamondbacks, can the Rockies, with their strong offense make a push and open their window to win the NL West?

It's very exciting to see them in the thick of it, and if indeed the race is this tight, we have a very very exciting September to come. Here's what the Rockies roster projects to be in 2012:

A quick look at their lineup shows that the bulk of it is locked up for years to come, especially LF Carlos Gonzalez, SS Troy Tulowitzki, and newcomer RF Michael Cuddyer.

They recently cleared the path for future 3B Nolan Arenado (I'm watching you for keeper reasons) and have their other top prospect P Drew Pomeranz coming up around April 15th to make his first start. Next season, they have C Wilin Rosario and OF Tim Wheeler coming to the big league club.

The hope for this season, as Jonah Keri noted in his Rockies preview, P Jhoulys Chacin keeps his strikeout rate high:

Chacin. That strikeout/ground ball combination is potentially lethal. Just a question of if the drop of more than 2 strikeouts per 9 innings last year was an aberration, or the start of an unhealthy trend.

Similar to what I said in my Dodgers piece, the Rockies have a daunting task at hand with the Giants and newly revived Diamondbacks in the same division. If their pitching clicks, they can be a sneaky in this very close division. The window for the Rockies is open again and should stay open for at least through 2014.