Last week, I brought you my list of the starting pitchers whose peak value was relatively low compared to their career value. In other words, the pitchers who are often derided as "compilers" because their career WAR values are greatly influenced by consistency and longevity rather than dominance. This week, I focus on the greatest hitting compilers.

The process is the same as in the previous post. I first calculated each player's peak value by summing the squares of each of their top 5 seasons (by Baseball-Reference's WAR). This result is what I call "Peak Points." Then, I divided each player's career WAR by their Peak Points to find their Compiler Rating. Higher = more of a compiler.

Alright, on to the graphic. Here are the 10 greatest hitting compilers since 1901, with a minimum of 40 career brWAR: 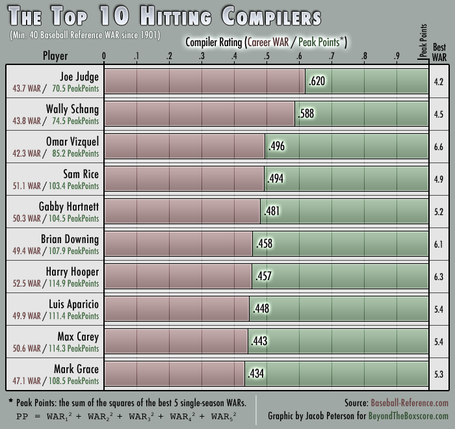 After the jump, I break down the top 10 and discuss a few other notable hitters. Plus, there's a bonus graphic of the 10 hitters who were the least compiler-y in their careers.

The top hitting compiler, Joe Judge, was a first baseman from 1915 to 1934, mostly for the Washington Senators. He never had much power (career high: 10 homers), which hurt his value at that position. However, he always hit for a good batting average and also walked a lot. The good average helped him stay in the lineup year in and year out (teams in that era loved the batting average), while the walks helped offset the fact that he didn't hit for power (though I doubt that the walks were properly valued in his day).

Judge's career was fascinating, and a perfect example of a compiler. His career-best WAR was just 4.2, but he had 10 seasons of between 2.9 and 4.2 WAR. That ties him with Carlton Fisk for the most season in that WAR range (though Fisk had 5 seasons better than Judge's best season). It's that kind of consistent good-not-great performance that makes for the ideal compiler.

The #2 guy, Wally* Schang, was a catcher who played at around the same time as Judge (1913 to 1931). He was a teammate of Babe Ruth's on both the Red Sox and the Yankees. He similar to Judge in that he didn't have much power (career high: 8 homers), but he hit for a decent average and walked a lot. Schang's best season was just 4.5 WAR, but he had a ridiculous 15 seasons with at least 1.9 WAR. That's easily the most seasons in that WAR range in MLB history; no one else has more than 12.

* By the way, if the minimum career WAR is lowered from 40 to 30, three of the top ten players in Compiler Rating would be named "Wally": Schang, plus Wally Pipp and Wally Joyner. That's out of only 4 hitting Wallys with that much career WAR (the other is Wally Berger).

I'm sure you are familiar with the career of Omar Vizquel. About a third of Vizquel's career WAR comes from his defensive value. On offense, he was never particularly good, with the exception of the 1999 season, when he hit an astonishing .333 (38 points higher than he's hit in any other season). That led to a 6.6 total WAR, which is miles ahead of his 2nd-best season (3.4 WAR).

Some other notable players who had high Compiler Ratings but didn't quite make the top 10:

Aside from Damon (whose career value is a fair amount behind the other 4), that's like a who's-who of the players that Hall of Fame voters haven't given enough attention to in the past 15 years. Whitaker, Randolph, Evans, and Smith all have at least 60 WAR, which is roughly the historical standard for the Hall. Yet none received much support at all in the voting. Meanwhile, several lesser players (at least by career WAR) were voted in.

The funny thing is, a guy like Jim Rice didn't even have a notably higher peak than the guys above. He had 161 Peak Points, compared to between 146 and 164 for Whitaker, Randolph, Evans, and Smith. The same goes for Kirby Puckett, who had 160 Peak Points and, like Rice, much less career value than the others. Whitaker, Randolph, Evans, and Smith had basically the same peak value but much more added value in non-peak seasons.

Somehow, those extra good-not-great years seem to have worked against the compilers, perhaps by leaving a lingering memory of unexceptionalness in voters' minds. Whereas players who fade away more abruptly, like Rice and Puckett, perhaps benefit from having their best years be fresher in the minds of the voters. At any rate, it's a strange and unfair result for the compilers.

Okay, now let's look at the hitters who were least compiler-y. Here's the top 10: 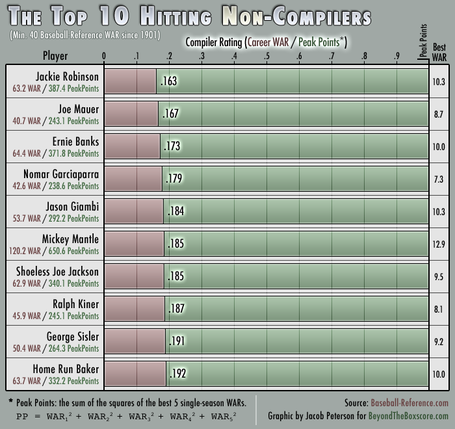 Jackie Robinson's rating is certainly influenced by the fact that he was kept out of the majors for at least 5 years due to his skin color. As a result, he debuted in MLB at his absolute peak, skipping the pre-peak younger years that would have raised his Compiler Rating.

Part of the reason Joe Mauer ranks so highly is that he has yet to enter his decline phase. If his decline is abrupt and unproductive, he could still end up as one of the top non-compilers. But I don't think anyone is rooting for that.

Then there's Shoeless Joe Jackson, whose career was cut short through his participation in the infamous Black Sox scandal, which led to him being banned from the game.

Some other notable non-compilers from outside the top 10:

It's interesting to see Ron Santo and Jim Wynn rate so low in Compiler Rating, as both were clearly underrated by Hall of Fame voters. With very high peaks (330 Peak Points for Santo, 276 for Wynn) and excellent career WAR totals (66 WAR for Santo, 60 for Wynn), you'd think those guys would've gotten more support in the voting. I guess it comes down to the fact that the voters prefer high batting averages (which Santo and Wynn did not have) to high on-base percentages (which they did).

That Babe Ruth was pretty good, huh? Albert Pujols (453 Peak Points) and Alex Rodriguez (445) are the highest-ranking active players, at 14th and 15th, respectively. The next two highest active players both play for the Rockies: Giambi (292) and Todd Helton (273).