A Graphic Look at the Window to Win: San Francisco Giants

Share All sharing options for: A Graphic Look at the Window to Win: San Francisco Giants 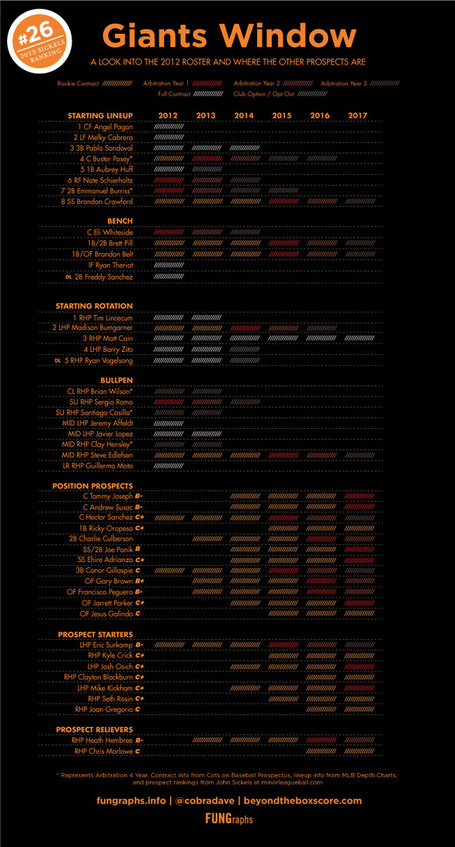 Last in the series, we look at the San Francisco Giants. We have a team ranked 26th overall by John Sickels with no A-rated prospects, and 7 B-rated prospects. Their system is ranked similar in all three rankings we looked at; 25th in Kevin Goldstein rankings and 26th in Keith Law's 2012 organizational rankings. Law notes:

The Giants don't go much over MLB's recommended draft bonuses, never seem to acquire any prospects in trades and haven't had success on the international front yet. Their amateur staff has done a great job finding value in later rounds without going over budget, including Brandon Belt and Heath Hembree.

The Giants are heavy favorites in their division coming into the season, but with defending NL West champs the Diamondbacks ready to cement their position at the top of the division, are the Giants window closing or can they stay strong for years to come?

Injuries took the Giants down last season, but with C Buster Posey back and some new offseason acquisitions that may help their stale offense, they're projected by most systems to finish first in the NL West. Last week, Jason Brannon from Baseball Nation compiled projected 2012 standings from PECOTA (Baseball Prospectus), Marcel (Tom Tango), CAIRO (Replacement Level Yankees Weblog), and Clay Davenport. Here's how the compiled projections sees the NL West:

It's very close. It's consistent across the projections that the Giants will finish with 85 wins; the differences being how teams finish behind them. Here's what the Giants roster projects to be in 2012:

I can write my own outlook for this, but my new friend Wendy Thrum (@hangingsliders) had a nice piece on the Giants organizational rankings, and that covered everything I'd touch, so I'll do the smart thing, and quote.

Gary Brown is considered the Giants’ top prospect. The speedy center fielder could see action in the majors as early as this season, particularly if the Giants fall out of playoff contention. Joe Panik is also well-regarded. He was drafted as a shortstop, but will likely be moved to second base as he makes his way through the minors. The Giants also have several notable catching prospects, including Hector Sanchez Tommy Joseph and Andrew Susac, all of whom could become important if Buster Posey is eventually moved to first base.

Regarding the Giants window:

With Cain’s extension, and the emergence of Bumgarner, the Giants just cracked open their window of opportunity to win with their superb pitching. San Francisco missed out on that in 2011 by failing to upgrade the offense after winning the World Series. Indeed, the pitching (rotation and bullpen) was actually better last season than in 2010, but the offense was historically bad.

The Giants will need to replicate the pitching from the past few years as well as a repeat of the timely hitting of the 2010 season to win this close division race. At the least, the window to win will stay open through 2013, but with salary relief coming from P Barry Zito's monster contract coming off the books, maybe if P Tim Lincecum leaves, they can afford to pick up some replacements.