The Projected 2012 MLB Standings (Based on Spring Training)

Share All sharing options for: The Projected 2012 MLB Standings (Based on Spring Training)

Last week, a bout of curiosity got the better of me and I found myself exploring the extent to which MLB teams' records in spring training correlate with how they perform after the official Opening Day. Unfortunately for my 7-22 Indians, a look back over the last five years revealed that (spoiler alert) there is a weak yet clear relationship between clubs' pre- and regular season records (R=.325, R2=.105). You can see the general trend here: 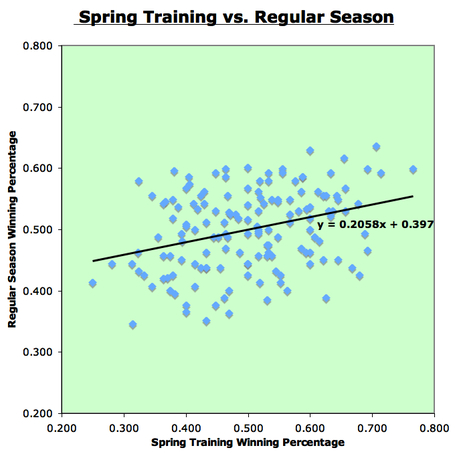 Now that spring training is over and Opening day for all but two teams is tonight or tomorrow, I am proud to introduce the brainchild of this data: the Simple Projections Rooted In Non-seasonal Games projection system (SPRING). As its full name suggests, SPRING will make an educated guess about the 2012 American and National League standings based on the standings of the 2012 Cactus and Grapefruit Leagues.

First, a few technical details. The formula for SPRING's winning percentage projections is the same as that for the trendline in the above chart (I played around with some fancier-looking formulas, but they didn't do very much better in terms of accuracy). SPRING's projections are inherently conservative because of the weakness of the relationship on which it's based—98 wins is the ceiling of possible projections, while 64 wins is the absolute floor.

I present these projections mostly as just a fun application of data. A perfect system, Tom Tango notes, would have a standard deviation from the results of about six wins; applying this model to the 2007-11 seasons, SPRING's standard deviation is 10.1 wins. It's worth noting, though, that simply predicting a .500 record for each team would have yielded a standard deviation of 10.7 wins over the last five years, so if you have absolutely no information to go on you'd be better off with SPRING. 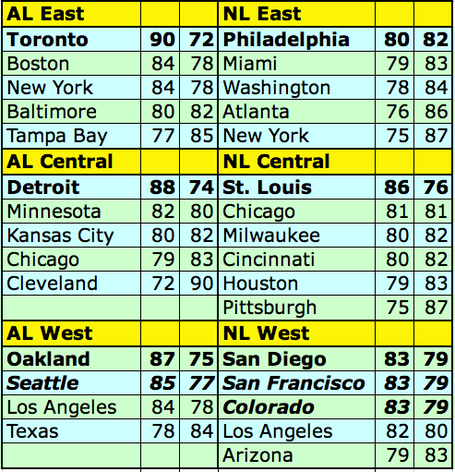 Some pretty interesting takeaways here. We have a three-way tie in the NL West (the Padres are ahead by a fraction of a win). The Phillies finish under .500...yet still win the division. Tampa Bay finishes below Baltimore, and the Astros aren't the worst team in baseball (Roll Tribe!).

But my favorite part of these projections is that the Blue Jays have the best record in baseball. Combine their top seed in the SPRING projections with the fact that they have the most to gain from the additional wild card and their ranking as the most unpredictable team in baseball and it could be a fun summer in Toronto.