Bring you recaps of all the action from last night.

Like any other day, we had some great games on Saturday. Some were high-schoring, some were pitchers' duals, some were down to the wire and some were over before they started. With lots to get to, including a hidden ball trick, let's dive right in! 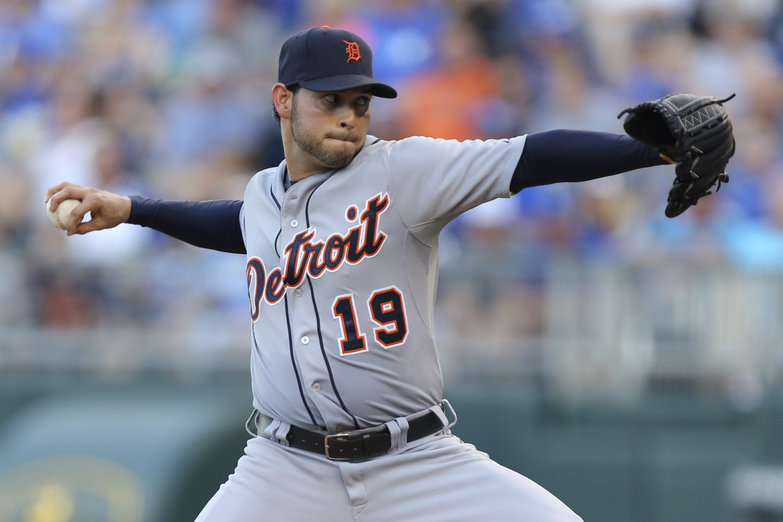 The Tigers continued to roll as they won their 13 game in their last 14 contests. Leading the Tigers was Anibal Sanchez who struck out 8 Yankees in 7 innings of work, with a Lyle Overbay two-run homer representing his only real mistake of the day. On the offensive side everyone hit. Despite basically playing on one leg, reigning AL MVP had 3 hits including his 35th homerun of the season, showing that even 75% of MIggy is better than the majority of baseball players. Torii Hunter and Austin Jackson went deep, helping the offense to a .732 slugging percentage against Phil Hughes and the New York bullpen.

Truthfully this game was summed up rather nicely by fellow BtBS writer Neil Weinberg before it was even over:

Early report from today's game: Sanchez dominant, Cabrera can hit, and Iglesias is good at defense. Tweet can be reused all season #tigers

More on the Yankees: Pinstriped Bible More on the Tigers: Bless Your Boys

What's gotten into Josh Reddick? After hitting just five homeruns entering the series against Toronto, Reddick has matched that total this weekend with three bombs on Friday night and two more in yesterday's contest. With five homers in two days, Reddick tied a major league record for big flys in back-to-back games, and he became the first A's player to do so since Mark McGwire in 1995. Alas, it still wasn't enough to overcome the Jays and give rookie Sonny Gray a win in his first big league start. The Jays offense came from two-run homers by Jose Bautista and Jose Reyes and an RBI single from Colby Rasums which proved to be enough. But the win didn't come without some dramatics in the final inning.

After allowing the second of Reddick's homeruns and singles to Albert Callaspo and Coco Crisp, the A's utilized a well-timed sacrafice bunt to put runners at second and third with one out, creating the highest levearge situation of the game (6.08). Casey Janssen was able to get Jed Lowrie to flyout and Yoenis Cespedes to strikeout to end the threat and the game.

In a battle of the bottom two AL Central teams, the White Sox were able to overcome an early deficit to snap a five-game losing streak against the Twins with a 5-4 victory. Minnesotta took an early 4-3 lead on third inning homeruns by Justin Morneau and Oswaldo Arcia. The lead didn't last long though, as Chicago tied the game in the sixth on a sac fly by Blake Tekotte and they took the lead on a Connor Gillaspie RBI single. Once they got the lead, they never looked back, riding a strong performances by Nate Jones (4 K's in 1.1 innings, .199 WPA) and Addison Reed (.175 WPA) to the win.

More on the White Sox: South Side Sox More on the Twins: Twinkie Town 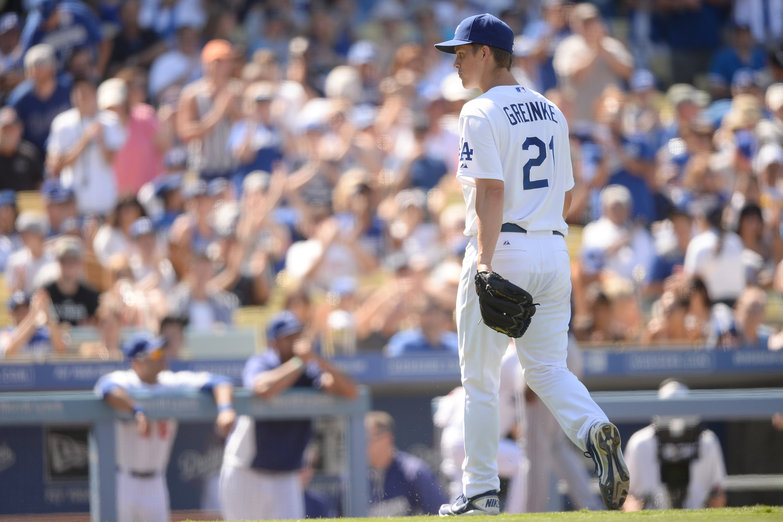 This game was a prime example of a pitching matchup living up to its billing. Zack Greinke did exactly what you'd expect Zack Greinke to do, holding the Rays scoreless for 6.1 innings, while Roberto Hernandez (still Fausto Carmona to me) gave up five runs on eight hits in just four innings. Of the eight hits, only two went for extra bases, but Adrian Gonzalez's two-run homer provided the big push and the Rays found enough holes to score the rest of the day. Greinke was the real star though, striking out 7 and scattering 6 hits on his way to a .189 WPA.

On a day where nearly everything went wrong for Rays, they did have a bright spot by pulling off the hidden ball trick for the first time in six years! Here's video evidence, although it takes a while for the commentators to figure out exactly what happened.:

Chris Davis launched his 42nd homerun of the year, a mammoth 466 ft shot to centerfield in the eighth inning, but it wasn't enough to life the O's to a fourth straight win. San Francisco's pitching staff really shined in this game, giving up just one earned run and striking out 9 of the 39 batters they faced, resulting in a staff WPA of ..325.

More on the Giants: McCovey Chronicles More on the Orioles: Camden Chat

Scoring seven runs in a game is never easy, but scoring seven runs without hitting a ton of balls hard is truly difficult. But that's exactly what Anaheim did last night, scoring three runs on sac flies and two more on RBI fielder's choices, plus they benefited from four Cleveland errors. In the victory, C.J. Wilson added another tale to Brian Kenney's #KillTheWin movement. Wilson did get the win, despite a WPA of -.099 in the game. Also in this game, Mike Trout showed that he is somewhat human, going 0-4 with 3 punchouts. Then again, he also walked in the eighth inning, extending his streak of reaching base in consecutive games to 40, so maybe he's not after all.

In the biggest rally of the evening, the Nats used a five run seventh inning to overcome the Phillies lead and get a much needed W. The big hit in the inning came from former Phllie, Jayson Werth, whose two-run blast also constituted his 1,000 big league hit, a perfect way to earn a milestone. The homer was easily the biggest turning point in the game, taking the Natts' win expectancy from 54% all the way up to 88% with one swing of the bat. For the Phils, it was really the pitching staff, specifically the bullpen that let them down. After Cliff Lee left the game, the relievers combined for a -.622 WPA in two innings of work.

More on the Nats: Federal Baseball More on the Phillies: The Good Phight

By now you're probably well aware that Jacoby Ellsbury is headed for free agency and he represents an interesting dilemma. He's had some injury problems, but when he is healthy Ellsbury is the type of player that excels in all parts of the game and that is reflected in his WAR totals. Last night, the healthy and Ellsbury was on full display. The centerfielder went 4-5 with two doubles, two runs driven in, and his league high 42nd steal of the year. He also made two fantastic defensive plays,running down a ball hit by Miguel Tejeda with the bases loaded in the first, and also taking away a hit from Jarrod Dyson with a man in scoring position later in the game. Also pitching in on the offense for Boston was Will Middlebrooks who was just recalled to the team before last night's game. Hopefully for Boston's sake he can get things going in a hurry.

The Braves had to lose eventually, but to the Marlins? And Adeiny Hechavarria? #YCPB at it's finest right there. Both teams received stellar outings from their respective starters as Nate Eovaldi (82 game score, .429 WPA) and rookie Alex Wood (76 game score, .344 WPA) kept the game locked at zero for a long time. It wan't until the ninth inning that Miamia broke through, when Hechavarria scored on a Jordan Walden wild pitch after leading off the inning with a triple. With the loss, Atlanta remained 14.5 games ahead in the NL east, a lead that will be difficult to over take.

Dragged down by an uncharacteristic four error night, the Reds dropped another winnable game that may come back to haunt them. Give San Diego credit though, even with a team that is ever changing that they are able to still put a quality team on the field.To earn the win, Tyson Ross dominated, reminding more of his brother in Lo-A than of himself.

In his Ranges's debut, Alex Rios did not disappoint, going 2-3 with a triple, driving in the game-tying run at one point. A.J. Pierzynski also clubbed a homerun in the game, as well as a double, and quietly he's been very productive once again. Pitching was average across the board, just simply good enough for now.

More on the Rangers: Lone Star Ball More on the Astros: Crawfish Boxes

In a game that featured only 3 strikeouts from both sides combined, the offense for the Cubs was just enough too get the W. Matt Holiday, back and looking like the Matt of old, was the MVP of this one, posting a .316 WPA even in defeat.

This series has been a tough for Pittsburgh. Francisco Liriano and now A.J. Burnett have pitched, and neither performed up to the level we're accustomed to at all. A day after getting hammered, Burnett kept the game much closer than last night, but a five-run fifth inning did him and Pittsburgh in. After those runs, the ticket office must have held on a bit because attendance was poor for the day.

It must not be easy being a Mets fan. Year after year you are promised improvements and they just don't come. But now, the team has some potential, part of which was on display last night. Rookies Wilmer Flores (2-4, 3 RBI) and Juan Lagares (2-5, homerun and a steal) were the offensive standouts. On the mound, Zack Wheeler coughed up just 1 run in 6.1 against the future ace. Hang in there Mets' fans, the future is bright.

More on the Mets: Amazin' Avenue More on the Diamondbacks: AZ Snake Pit

And our final game of the day actually represents our biggest blowout as well. It was a pretty balanced attack -- seven members of the Brew Crew drove in at least one run. Scooter Gennett provided the yard work, hitting a three-run homer in the seventh inning to finally chase Seattle pitcher Hisashi Iwakuma. For the Brewers, Tom Gorzelanny turned in his get game of the season, striking out seven over seven frames while allowing only one runner to third base all day.