Chase Utley Extension: Something everyone wants

On Thursday, the Philadelphia Phillies announced an extension with second baseman Chase Utley. The extension is the third extension handed out to second basemen in the past few weeks, and it's an agreement that both parties had major interest in.

Share All sharing options for: Chase Utley Extension: Something everyone wants

Typically at a negotiation table, there is a battle of interests. A player typically uses the threat of leaving against a team to raise his cost. A team typically uses the threat of signing other players. However, in the Chase Utley extension, none of that existed. Utley wanted to be a Phillie, and the Phillies wanted to retain the face of their franchise. All that was left to do was negotiate the dollars, years and incentives.

Perhaps it was the nature of these negotiations that led to the two sides agreeing to such an odd contract extension. Here is the breakdown of the contract:

When the dust settles, the contract has a floor of two years, $27 million and a ceiling of five years, $75 million. At face value -- and really, in all scenarios -- this contract is a very team-friendly deal. The deal is such a team-friendly deal that the Phillies actually may have saved themselves some future financial flexibility to help get around the horrendous contract being paid to Ryan Howard. However, it is dangerous to assume a deal is good simply because a team signed a good player to a low salary. Contracts do not pay for past performance, after all. 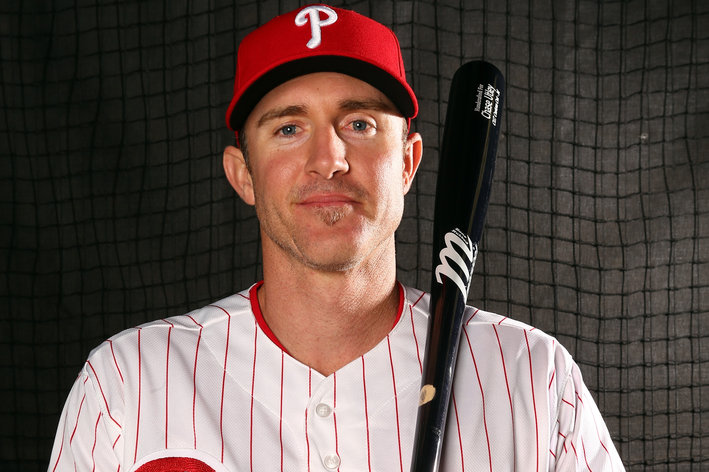 The first part of discussing Chase Utley is dealing with the elephant in the room: between 2010 and 2012 he played in 301 of a possible 486 games, meaning he played in just under 62% of his team's games. He's dealt with a slew of different injuries, and the most concerning of those are related to his hip. At the ripe age of 34, it isn't unreasonable for people to be worried about health issues.

While it's easy to discredit an older player in a relatively small sample size, Utley is striking the ball well and can still field the ball very well. Utley isn't the benefactor of a high BABIP, an inflated HR/FB ratio, or crazy fielding numbers either. He's simply having a solid season all around and playing to his skills.

Playing Through the Contract

If you are new to transaction pieces here, it's suggested that you become familiar with Jeff Zimmerman's player projection piece from 2011. At the beginning of his new contract, Chase Utley will be 35 years old at a position that ages very poorly historically. This puts him in the danger zone of rapid decline, as seen below: 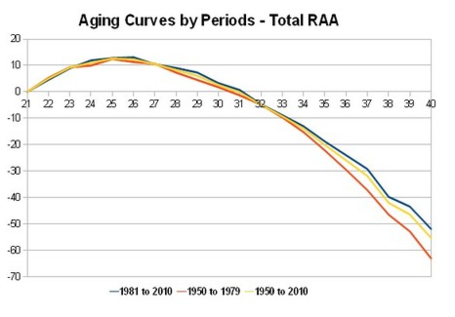 Since injuries are unpredictable, and since we don't know what specific knee injury the Phillies are worried about, there are really two contract structures to be aware of with Chase Utley: the floor (two years, $27 million) and the ceiling (five years, $75 million). Any area between these outcomes is tied to health, so if Utley becomes injured the contract adjusts and the team then controls Utley's fate. Essentially, the only way the Phillies can lose this deal is if Utley is perfectly healthy and suddenly forgets how to play the game of baseball -- or he simply ages more poorly than the average bear.

Going by the above graph, Utley's decline as a hitter will follow this kind of career path should he decline like the average player:

The toughest part in projecting out this trend is figuring out where it starts. Utley has missed so much time recently that it can be tough to gauge what exactly he could be projected to produce in a full season of play. Since the beginning of 2011, Utley has produced 10 wins of value in 271 games, which is a pace of nearly six wins per season. Now, it's pretty unreasonable to assume Utley is going to play 162 games a year. For the sake of argument, let's assume Utley plays 75% of the time -- so either three out of every four days or with a pair of decently lengthy trips to the disabled list.

If Utley is worth nearly six wins per season, which it appears he can still play at in limited samples, then this would translate to a base line of 4.5 fWAR for his current playing ability. If we remove the seven runs of value players typically decline between ages 34 and 35, then Utley could be projected for as much as 3.8 fWAR in the 2014 season. Using the above decline and the decided starting point, this is what Utley's decline looks like:

Adding those numbers up, that's 13.4 fWAR over five years. Without adjusting for possible inflation -- so using current estimated dollars per win -- that performance would be worth $67 million. If inflation were to be adjusted for, then it appears the Phillies got a bit of a steal on this deal -- and that's with a conservative estimation of only 75% playing time. Considering the contract is worth less if Utley misses that much time per season and the options become team options, then the Phillies are locked into a great deal unless Utley's decline is unexpectedly rapid. 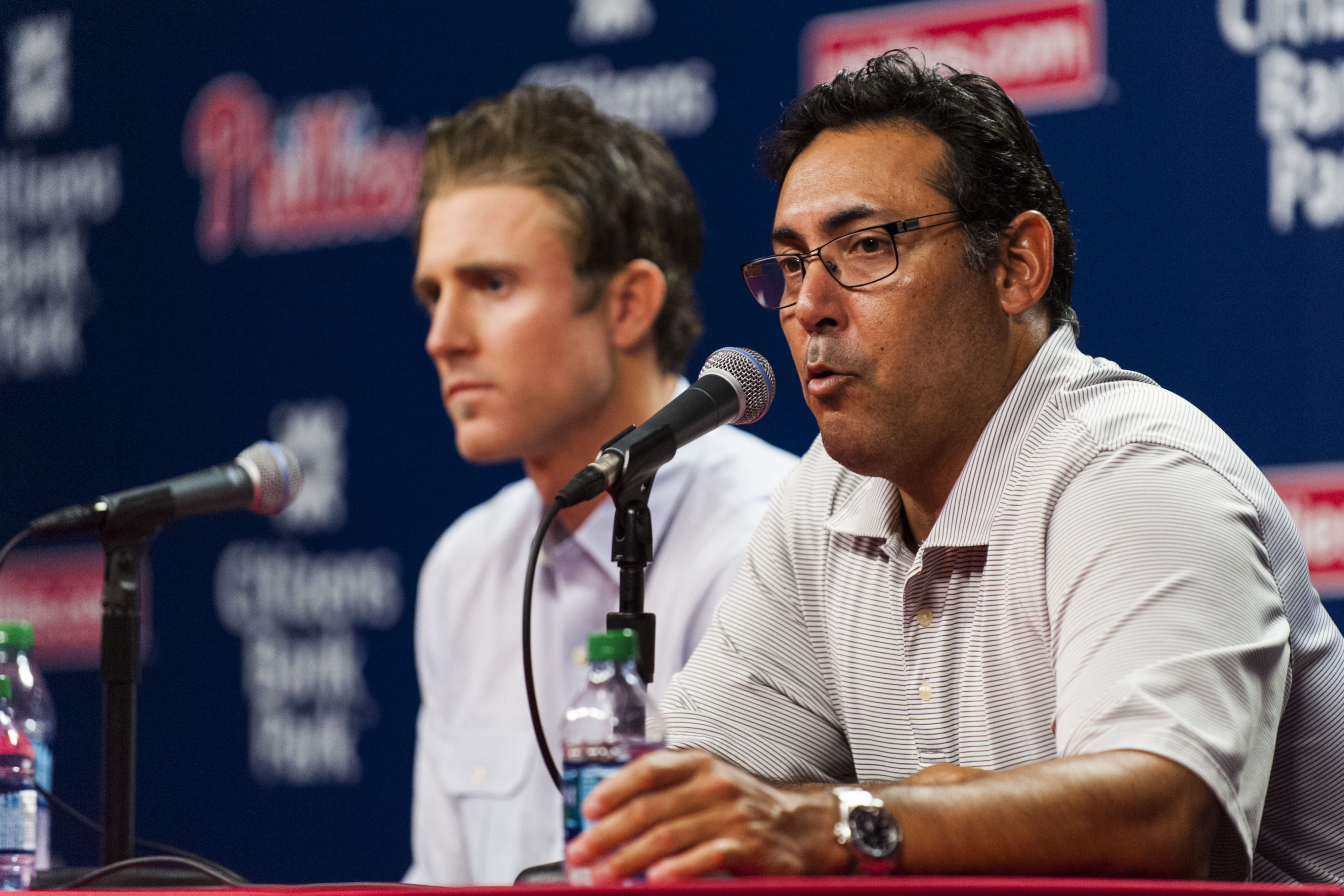 Is this what was best for the Phillies?

While the extension is almost certainly going to be a win for the Phillies, it wouldn't be fair to the situation to avoid questioning whether or not it was the right move for the franchise. Without extending Utley, two options become present: letting him go in free agency or trading him to another franchise. In the case of free agency, the Phillies would most certainly have offered Utley a qualifying offer, which will likely be worth just under $14 million on a one-year contract. Since Utley plays at such a high level despite his injuries, it is unlikely that he would accept this deal rather than test the market, so the Phillies likely would have received a compensation pick in that scenario.

As for the other scenario, a trade would only be possible with Utley's consent. He has obtained 10-and-5 rights, meaning that he essentially has a full no-trade clause. However, the Phillies could have attempted to play a risky card and tell Utley that he was not going to be coming back with the team either way, which would have forced Utley's hand into possibly waiving that no-trade clause. However, as shown in the following tweet, this would not have mattered:

Rather than risk a sour ending with Utley -- and with a trade scenario next to impossible -- the Phillies took the safe route with the team-friendly extension.

It would make very little sense for the Phillies to go through an ugly divorce with the player who was the focal point of their franchise during multiple World Series runs. In hindsight, it is clear that the risks involved with an extension -- which are minimal -- did not come close to the risks involved in forcing Utley out of town. While it may have been nice to get younger, save some money, and expand the farm system, the Phillies have a big reason to try to remain competitive: they will be negotiating a new television deal in 2015. The better the ratings are up to that point, the more dollars will be pumped into the deal. Those ratings will very likely remain high with the presence of Chase Utley, so it's no surprise that this deal happened.

Ken Woolums is the Transactions Editor at Beyond The Box Score.