After two awesome seasons in 2011 and 2012, not to mention a very potent offensive career to date, Prince Fielder is finally showing signs of weakness and instability at the plate. Will it affect the Tigers chances of winning a championship in 2013 or are his issues temporary?

The Detroit Tigers have some great players. Their starting rotation, the best in MLB this season, includes the likes of Justin Verlander and Max Scherzer, and the team is led offensively by hitting juggernaut Miguel Cabrera. Cabrera, who has been playing semi-injured recently, continues to smash opposing pitching, proving over and over again that he is the best pure hitter in baseball. Cabrera made this known once again Friday night, when after fouling a ball off of his leg, he hobbled back to the plate and crushed a Mariano Rivera cutter over 400 feet to centerfield to tie the game at three.

For as good as Cabrera has been this season, his counterpart on the other hot corner of the diamond, Prince Fielder, has been as disappointing. In only his second season with the Tigers, Fielder has been subpar in comparison to the rest of his career. Currently, Fielder has 17 home runs, a .175 ISO, and a 117 wRC+, which all fall well below his career averages in those categories. Given that the big first baseman doesn't provide much value in his defense of base running, if he doesn't contribute at the plate, he becomes incredibly overpaid space filler.

When looking over Prince's approach at the plate, we see that his contact percentage has fallen this season. Currently, 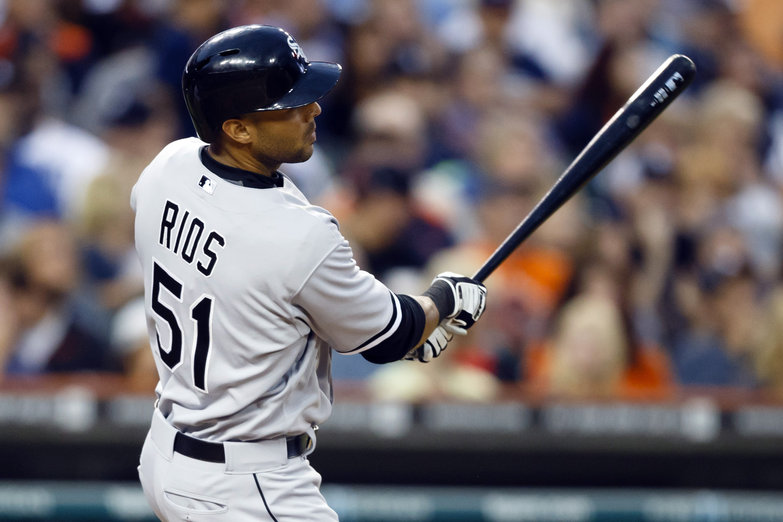 The Rangers have a new outfielder. Bryan opens the discussion of Alex Rios to the Rangers.

he's making contact 65.9% of the time on pitches out of the strike zone, and 84.3% of the time on pitches inside the strike zone. In 2011 and 2012, when Fielder showed his true offensive prowess on his way to a $200+ million contract, Fielder put up an overall contact percentage of almost 81%, whereas this season that number has fallen to 77%. Whether this data represents an overall trend downwards constitutes a separate issue, but the contact rates have shown up in his other stats.

Fielder's strikeout percentage currently stands at 17.4%, but in the last two seasons that number was closer to 13.5%. This spike in his strikeout totals has definitely lowered his contact percentage, and given Prince's ability to hit the ball hard on a consistent basis, the more he hits the ball the better. On the other hand, making contact hasn't been Prince's only difficulty this season. His attrition in power has partially been due to an increase in fly balls (39.3% in 2013 compared to 33.3% in 2012), but a decrease in the number of those fly balls that go for home runs (career low 12.1% HR/FB percentage in 2013).

Interestingly, Fielder also has accumulated his lowest BABIP since 2007. Right now it stands at .289, not that far below the league average of .296, but a bit further below his career average of .301. Some of his decrease in BABIP comes from his lack of contact, which leads to fewer balls put in play, and thus fewer opportunities to accumulate hits. Still, some of this decrease has its roots in some bad luck. Fielder has compounded a year in which his offense hasn't shined as brightly as before with some random bad luck. Put together, he becomes a weak offensive first baseman.

The most fascinating aspect to Prince's decline in hitting this season comes from his splits numbers. In his career, Fielder has hit both righties and lefties well, but like most left-handed hitters, he has excelled especially against right-handed pitching. This season though, Fielder's numbers have been better against left-handed pitching than against right-handed pitching. He holds a career wRC+ vs. RHP of 152 and career wRC+ vs. LHP of 115. For some reason, this season, Fielder has improved vs. southpaws (128 wRC+) but has shown significant regression versus righties (111 wRC+).

ZIPS projects Fielder to improve down the stretch, predicting him to finish the season with a 128 wRC+, .183 ISO, 25 home runs, and a .291 BABIP. Still, those numbers remain lower marks than the Tigers hoped for, and pale in comparison to his awesome 2012 and 2011 stats. While some of the differences in Prince's performance this season could be due to some randomness and bad luck, and any issues he might be having could be only a one-year aberration, his difficulty in hitting right-handed pitching, increase in K%, and serious drop in HR/FB% could become more permanent issues moving forward.

At 29 years old, Prince has a number of productive years, especially from a hitting standpoint ahead of him; he's a first baseman in his prime. Nonetheless, the older a player gets, the more we begin to see holes emerge in their game, and Fielder's issues this season could become worse and worse as he ages. At the moment, Miguel Cabrera has taken the load off of Prince's back, carrying him and the rest of the Tigers' offense, but for Detroit to succeed, not only in 2013 but for the next few seasons, Fielder must hit better than he has thus far in 2013.

All statistics courtesy of Fangraphs, Baseball Prospectus and Baseball-Reference.