How many building blocks do you need?

Baseball teams, unlike basketball, need more than one very good player to succeed. How many good to great players does a team need to really compete?

Share All sharing options for: How many building blocks do you need?

In basketball, often times a single player can determine the fate of a team. In the 2009-10 season, the Cleveland Cavaliers won 61 games and reached the Eastern Conference Finals. The following year, they declined by 42 wins to being the worst team in the Eastern Conference. The difference? They lost Lebron James in free agency to Miami.

Now, James is the best player in the world, but there are several lesser examples out there. At the same time, one player can't lead his team all the way over the top, as the world saw with Lebron James during his Cleveland years. In the words of Kareem, "One man can be a crucial ingredient on a team, but one man cannot make a team."

What to do about Ellsbury 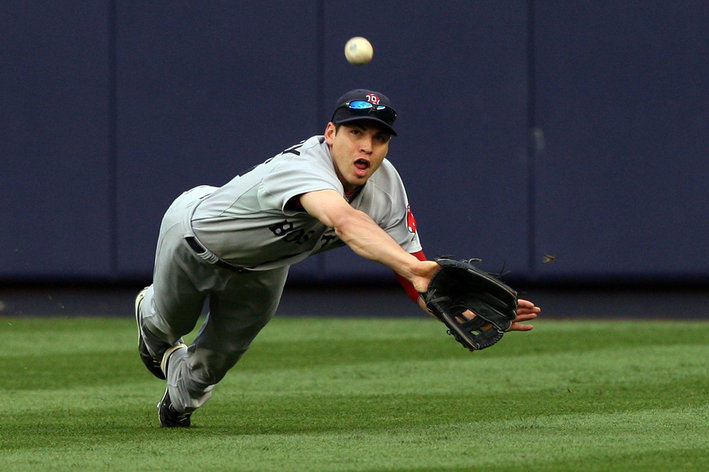 Jacoby Ellsbury can be, when healthy, one of the solid foundations to build a franchise on. Ben Horrow looks at what would be the best decision for Ellsbury in his impending free agency.

Now, in baseball, it's near impossible to build a team around one single transcendent player. Even the best starting pitcher goes once every five days, and the best hitter gets at most around 11-12% of his team's plate appearances. There are just too many times where a single player is not in the middle of the action to build around solely one player.

But how many players are necessary? Or, another way, how many players do you need to look at to really get an idea about how good a team is? Do we treat hitters and pitchers differently? What about when combining them?

In looking at this, we'll look at WAR. Now of course, the WAR of an entire team does correlate pretty strongly with the team's win percentage. However, we'll start by looking at the WAR of the best players on the team, and see how this correlates with win percentage. Then, we do the same for starting pitchers. In addition, we'll also look at these players through the scope of win probability added, and then combine both the rotation and lineup to see how they all go together.

In looking at this question, I limited the years to 2002-2012 (So that batted ball and win probability data would be available), and only looked at players with over 100 PAs or 30 IP. Originally, this had started out as a "What Do Great Teams Have in Common" post, but this became more interesting. So there will be a mix of both topics here. All data courtesy of FanGraphs.

So, in looking at this, we take the sum of the top players for each team and look at the correlation between this summed WAR and their win percentage. Of course, as the number of players in the summation increases, the correlation generally also increases. 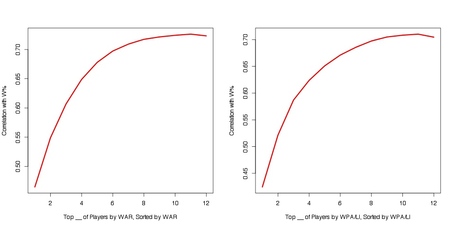 If we look at WPA, we see a very similar correlation curve. Now from this curve, we want to look for a diminishing returns type of phenomenon. Yes, we could add in more players to increase the correlation by a minimal amount. However, if a team believed that they needed to get one more very good player, the cost (In dollars) might not outweigh the increase in the correlation.

With the hitters, it seems that that point of diminishing returns occurs somewhere around the value of five. So we can get a decent indication of team performance from the top five batters's combined WAR, and the positive correlation implies the obvious: The higher this top five WAR, the better the win percentage.

Now having five solid to elite players (In order to try to ensure a higher win percentage) seems like a tough thing to ask, but of course, there is the pitching side of the equation to consider.

In the consideration of the pitchers, we'll only work with the starters, as the variability experienced in working with relievers leads to very low correlations. Again, we'll look at the top starters by WAR, and then observe the correlation between their combined WAR and team win percentage. 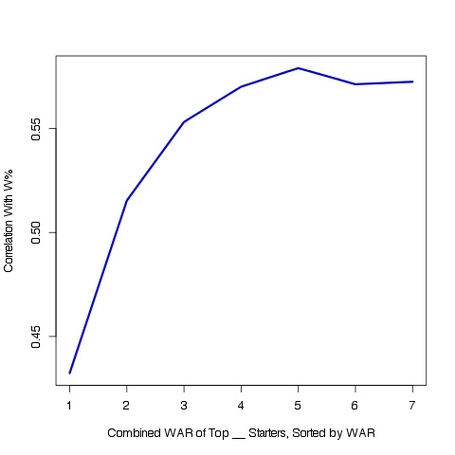 Looking At Both Rotation and Lineup

So, there's two ways that we can look at this. The first is to just combine all the players into one dataset, and do as before; sum the WAR for the top players regardless of whether they are a position player or pitcher. This first technique gives us the following chart and diminishing return point. 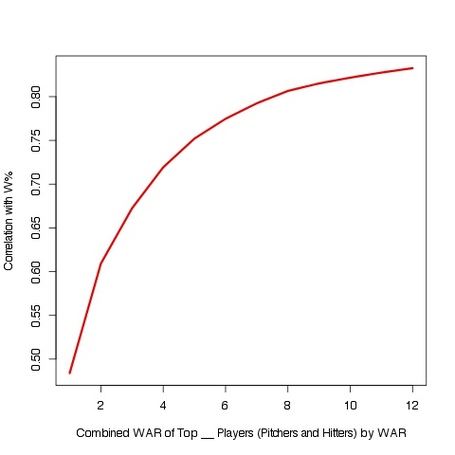 So here it seems that the breaking point is roughly five or six players in determining a reasonable correlation with win percentage. However, this technique may be slightly shortsighted. The main reason being that it treats pitchers and position players the same, when in fact one might be more crucial than the other. 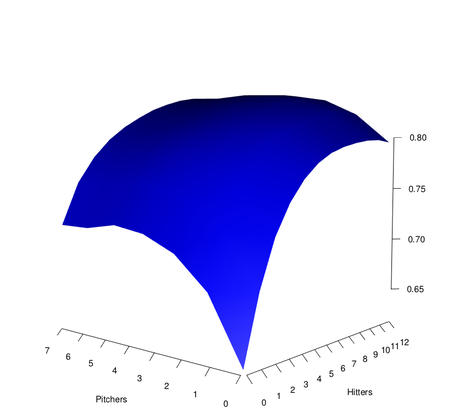 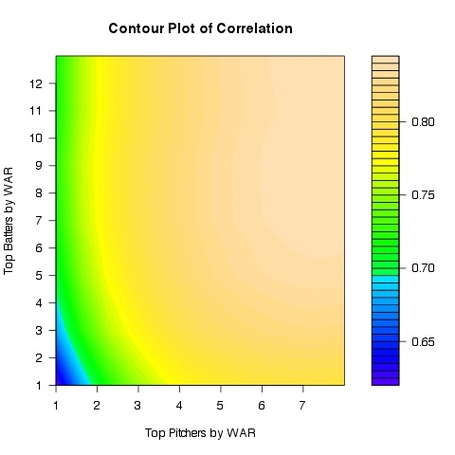 The first plot is a 3D surface plot of the correlations. While this may be a little difficult to see (And unfortunately cannot be rotated), it was too fun to not be included. To make it a little easier to view, the second plot, a contour plot, is included.

How Good Do Players Have to Be?

So we've established that we can look at anywhere between five and seven of a team's best players and have a pretty decent indication of the team's ability. However, how good do these players have to be in order to ensure decent winning percentages? Further, what about the team's who build around a different number of starters or position players? How well would those individuals have to perform?

So, when running this regression, the equation for fit is

So, from this, we can get ideas about what the mean estimates for win percentage would be for various combinations of pitching and hitting. This can be best seen in the contour plot below. 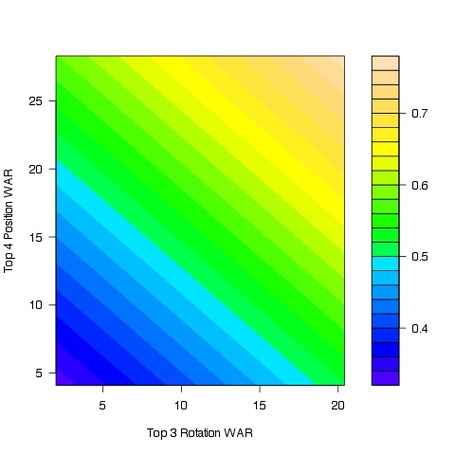 Finally, this plot gives an idea of how much WAR the top players for each team need to generate in order to get a good season, defined as a 90 win (Or 0.556 win percentage). Roughly speaking, as a midpoint of all possible combinations, a team needs about 12.5 WAR from its top three in the rotation, and 17.5 from its top four position players. In other words, you need seven All-Stars (as FanGraphs defines four-to-five WAR as an All-Star), or a couple of MVPs and five good players. Beyond this core set, a good group of role players, innings-eaters, and the like can fill out the team. This type of estimates can be redone for any other number of building blocks.

So it seems you can "build" around two players (one starter and one position player) if they are both transcendent, MVP-type players. You can even build around a couple of superstars, but regardless, you have to augment these foundations with a solid group of good to All-Star second bananas.