Which potential playoff teams hit well in various in-game situations, and which ones have glaring issues?

As the 2013 season winds down, and baseball transitions from the final act of the regular season into the climactic playoffs beginning in October, the baseball world focuses its attention on those teams that can taste or even sniff the playoffs. Since MLB added the second wildcard spot, this list of potential playoff teams has deepened, now including almost half the league. Now that more than 125 games have passed and so few remain left to play, we scrutinize every one of them hoping to find a pattern, new observation, or trend that signifies that one team will make beat another for one of the five playoff spots in each league.

Because more than three weeks still remain in the season, and much has yet to be determined in regards to the playoff picture, let's hypothetically consider all of the possible playoff teams as having made the postseason. Now, let's analyze these teams for the biggest strengths and weaknesses each one possess and attempt to predict the most favorable and least favorable match ups for each. What this analysis lacks in the ingenuity department, it makes up for in interesting knowledge previously unknown.

On Daniel Nava and the gift of patience 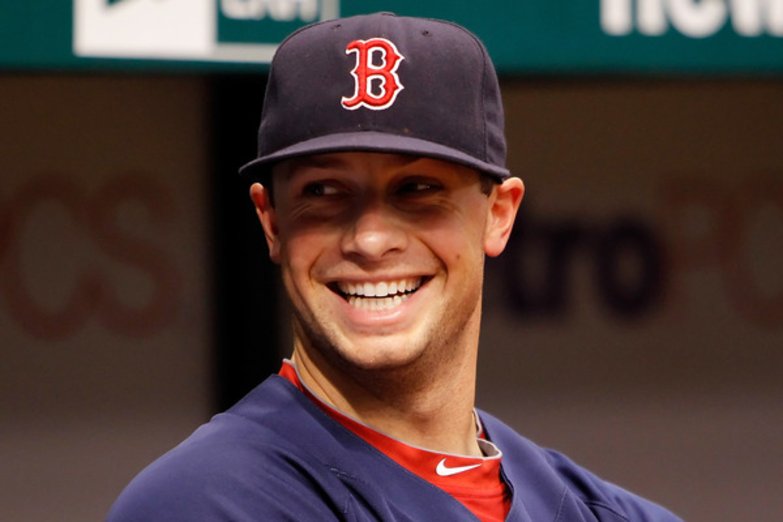 In the NL, the Braves have only to play out the rest of September to officially secure a playoff spot, but given the fourteen win gap between the Bravos and the second place Washington Nationals, we can safely assume Atlanta has this one sewn up. Speaking of all but done deals, in the NL West the Dodgers climbed out of their early season hole to claim the spot at the top of the division, with only the middling Diamondbacks gritting their way to a hopeful wildcard spot. The Central division sports three teams with the potential and possibility of making the postseason in the Red, Pirates, and Cardinals, and given these teams' deathly stranglehold on the wildcard slots, it seems more than likely all three will play baseball in October.

Here's a chart of how these teams fair in splits categories using wRC+ as my metric of choice:

As you can see, no one team performs at an above average offensively in all five categories. While it may seem like a cliché, the National League teams have better pitching than hitting, and thus rely more on pitching as well. The bolded numbers indicate the leader of the bunch in that category, but only the Cardinals hold the top spot in two or more splits. No NL team has a wRC+ over 100 against both left-handed and right-handed pitching, which indicates that in the fight to win the NL pennant, setting up the optimal match ups will become vital to all of these teams' success. The Cardinals' incredible wRC+ with runners on base dwarfs their league opponents, making them dangerous in the most vulnerable spots for opposing pitchers, but there obvious inability to hit left-handed pitching could become relevant when facing some of the games best lefty hurlers like Clayton Kershaw, Mike Minor, and Francisco Liriano.

The most fascinating aspect of this chart is that no team stands out as the clear-cut best offensive team. Given the lack of one dominant team at the plate, it becomes imperative for all of these clubs to get themselves in the best position to succeed. For St. Louis the crucial task will be to get runners on base because the Cardinals do their best work with ducks on the pond. The Pirates clearly have the advantage against left-handed pitching, which could work in their favor when facing teams like the Dodgers (Ryu, Kershaw, Howell, Rodriguez) and Braves (Minor, Wood, Maholm, and Downs), but could prove difficult against more right-handed pitching staffs like the Reds' cohort.

In the American League, we have more teams in reasonable contention for the playoffs. Here's how those teams, including four of the five AL East franchises, stack up wRC+ wise in splits:

In the junior circuit, the teams show an overall greater tendency towards above average offensive numbers. Only two more fringe teams, the Royals and the Yankees, have offensive issues, but due to injuries to position players, the Yankees have relied on their pitching to win. The Royals have the fewest wins of any of the teams on this list, and their offensive numbers, at least in comparison, imitate their win-loss total.

The first observation that jumps out is the incredible offensive dominance shows by the Tigers and Red Sox. The Tigers not only have good numbers in almost every category, Detroit's offense has superb wRC+ numbers in every split category except hitting in high leverage situations. Few pitchers in the entire AL will scare the Tigers or put them in a diminished position, making them a very dangerous opponent, especially when the game begins to come down to match ups of relievers and hitters. The Detroit offense tends to become more conservative in more high leverage situations, due to manager Jim Leyland's desire to play small ball in order to score a run. This shift might be a major cause of their drop in wRC+ in more crucial situations, and the solution to the issue is to simply let the Tigers lineup hit as per usual.

Gazing around the data we also see three other teams show very nice offensive balance. The Rays, A's, and Red Sox all perform well in almost, if not every, category listed, making them quite complete. The A's and Rays do so by varying their lineups so frequently, having set platoons available at multiple positions. The ability to have players play multiple positions as well as have specified hitting talents gives these teams the ability to matchup well with the defense in almost every situation. If the ALCS comes down to any combination of these three teams and the Tigers, we could see one of the best championship series possible, as rarely will these hitters be put in positions in which they have not faired well.

This piece only took a glimpse at the offensive splits of potential playoff teams, and another one on pitching is sure to follow. Overall we have learned that each league has one or two teams that truly stand out in specific situations, but even an offensive juggernaut like the Tigers comes with certain flaws that opposing managers and coaches will attempt to exploit, given the right situation.

All statistics courtesy of Fangraphs and Baseball-Reference.