A pitcher's pitch selection can be decided not only by what is successful, but what is en vogue. While the use of the fastball will never fade, there are other pitches that enjoy a heyday, then occasionally fade into the history books. Looking back at the last ten years, what pitches have endured passing fads and which ones could soon be extinct from the pitcher's arsenal?

It has been said that the essence of pitching is interrupting a hitter's timing. While pitch velocities and even pitching mechanics can be tweaked and altered to provide this desired result, the ultimate tool in the pitcher's toolbox used to mess with a hitter's rhythm is his pitch repertoire. Unless your name is R.A. Dickey, most pitchers start with a fastball and go from there, work to add two or more pitches to use in order to keep the hitters guessing and make any contact weak.

What is used typically is a result of trial and error on the pitcher's part -- does the curve ball break as necessary, does he have large enough hands to split his index and middle fingers enough to properly throw and control a split fingered fastball -- but is also about what is en vogue or what a particular coach or fellow pitcher suggests. Oftentimes, an organizational mantra can also dictate what will (or won't) be thrown by their farmhands, thus affecting a pitcher's eventual arsenal.

The development and evolution of a pitcher's repertoire was discussed during this year's Saber Seminar in a couple of different ways. From a player's perspective, former hurler Brian Bannister discussed the maturation of his pitch selection--especially his change up--which he threw throughout college, the minor leagues, and the pros. Things didn't really take off until he changed the grip after a conversation with a teammate. Sticking with the change up, PITCHf/x and sabermetrics guru Harry Pavlidis discussed what makes a good change up -- you can find the finer points here -- and how it affects a player's development.

Then, during his discussion of player evaluation, Keith Law briefly hit upon the development of a third pitch as a milestone in a young pitcher's development, and discussed the split fingered fastball and cut fastball. Law questioned why the split has fallen out of favor in recent years--in favor of the cutter-- to the detriment of many players looking for a fairly straightforward pitch to learn and control, due to the thought that the split is a potentially injurious pitch. Adding to these high points from Saber Seminar, I also ran across an old article discussing the slow extinction of the split, mainly due to injury concerns.

With so many alternatives to choose from, what have pitchers relied upon to get hitters out? Has the split died a slow death, in favor of the cutter? With the help of Fangraphs Pitch Types and PITCHf/x, we can answer those questions.

From the Fangraphs 'Pitch Types' tab on their pitching leaderboards, I collected all of the pitch types for all pitchers who threw at least one inning between the years of 2002 and 2013. The data set was further refined to only include stats from 2004 onward, in order to compare split and cutter data, as cutter data was not collected prior to 2004. Removing some of the less frequently seen pitch types, such as the knuckle ball, and 'unknown' pitches, as well as outings from position players (sorry Skip Schumaker!), we get the following charts: 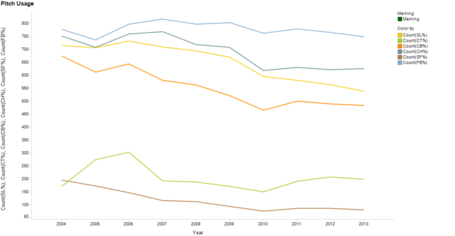 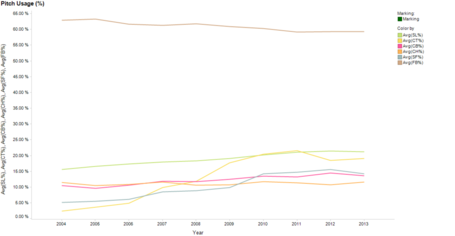 With these two charts, we see the number of pitchers who use a particular pitch across the years of interest (chart 1) and the average frequency a pitch was used (chart 2). Overall, we do see a decline in the use of the split in favor for the cutter, with a big jump in the use of the cutter in 2006. It also wasn't until 2006 that the cutter was thrown more frequently than splits by those who threw the pitch. Not surprising, most pitchers come armed with a fastball/change up combo but use a fastball and slider more frequently than other pitches.

While interesting and a nice start, there are enough differences between starting and relief pitchers that warrant visualizing their data separately, which we will do moving forward. Here are the same charts from above broken down into starter/reliever groups: 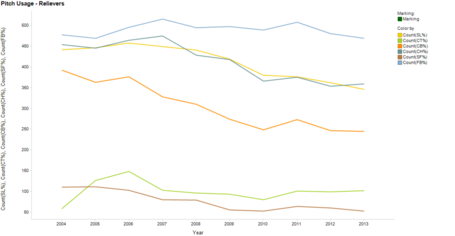 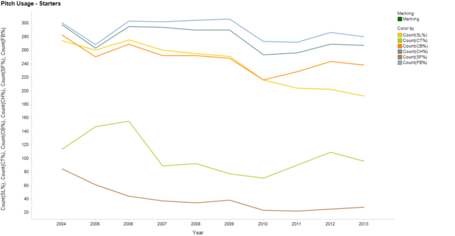 Here, the distinctions between the two pitching roles become a little more prominent. While we still find the slow drop in split use and a rise in cutters across both groups, it is also interesting to see starters begin to include the curve ball more than the slider as their breaking pitch, while more relievers are turning to the change up for the slider in 2013. Now, let's look at average frequency of each of the pitches thrown across starter and reliever groups: 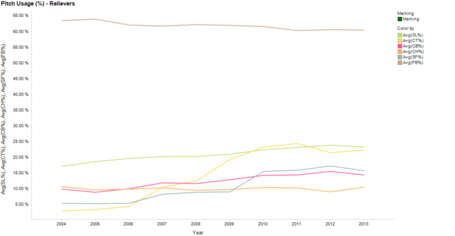 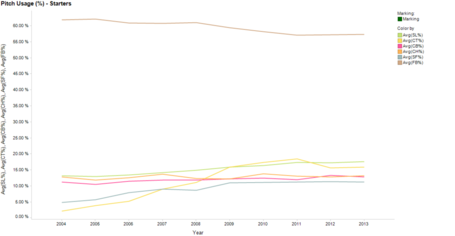 Looking at average percentage of a particular pitch thrown, we see that while the slider is starting to not be a commonly seen in a particular starter's repertoire, those that still employ it use it quite frequently. The cutter is on the rise in both groups, with the split hardly thrown by starters, but relievers still turning to it, with a bit of a renaissance of sorts seen in those who still use it, as it is thrown more frequently than a curve ball since 2010.

While these pitch types and data are thought provoking, they are limited by the classification style used -- two and four seam fastballs are all considered the same pitch, and sinkers are lumped in to the FB category as well. This is where PITCHf/x data can provide a nice alternative, as their classification system provides more granular information and provides the following pitch types:

While PITCHf/x data began coming online in the 2007 season, I took the liberty of throwing out some of the data and only looked at data from 2009 onward, to counter incomplete data and any hiccups arising from the application of the classification system.

With that caveat, how different does the data look? 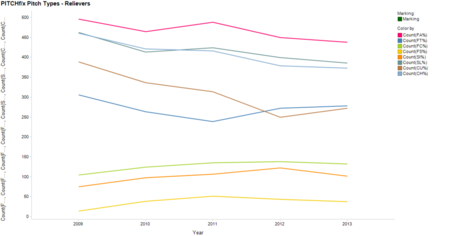 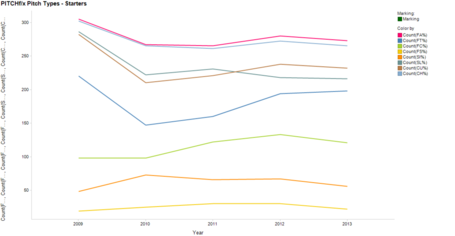 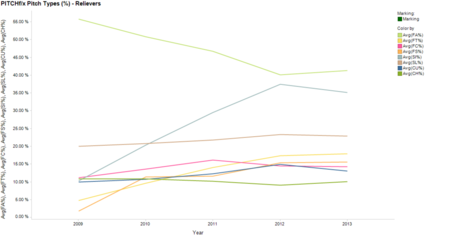 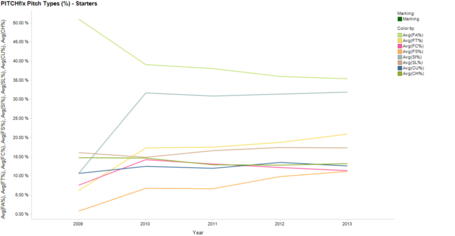 Right away, we see the differences PITCHf/x data provides at play, especially when considering fastball data. We also find that while there are fewer pitchers who throw the split, they are still throwing it with a similar frequency seen in pitchers who use the cutter and even the curve ball. For relievers, we see an interesting trend -- while a large portion of them use the change up, they do so very sparingly. Also of note is the how the cutter is appearing to fall out of favor in starter circles as of late, with fewer pitches using it, and throwing it as often as they do a split.

Looking at the five years of PITCHf/x data as a whole, we seen some interesting trends. While the year-to-year trends say otherwise, it looks like there has been lukewarm love affair with the cutter with both starters and relievers, with a slight decline is pitchers who use the split; this trend is more prominent in the starter population. In the last five years, we also see a large drop in the use of the curve ball and the change up in relievers.

There are a couple of limitations to the data provided. Much like one man's trash is another man's treasure, one man's sinker might be another two seamer; also, what might be labeled a cutter might really be a slider, or vice versa. The list of caveats can go on, but the point is we are at the mercy of the people and software that collect this information and their interpretation of each pitch. The data, Pitch Type or PITCHf/x, are exceptionally accurate, however we must still keep in mind a margin of error when interpreting the data. Along with this, while we can't make many assumptions with such a small data set, the data does speak to not only how different approaches can be between starter and reliever, but also how trends can catch on with regards to the utilization of particular pitches. That, and the split, while now not the golden child of a typical pitch repertoire as it has been in previous decades, is still alive and well.