How the Pirates built a winner

Things are changing in Pittsburgh, but how did they do it? Also, now that they have a winner, will they sustain it? Time to take a look at the past, present, and future of the Pittsburgh Pirates.

Share All sharing options for: How the Pirates built a winner

In the off season following the 1992 season, the Pittsburgh Pirates' organization changed forever when Barry Bonds signed a free agent contract with the San Francisco Giants. Since that fateful day on December 8th, 1992, the Pirates have not had a winning team--well, until now at least. After 20 consecutive losing seasons, the Pirates have managed to clinched that magical 82nd win and are now in the midst of a playoff chase. So how did they do it? Was it genius moves, luck, or something else? Well, the answer is that its a lot of everything--just like with any MLB team.

The Pirates have been trying to build a winner for a long time and there are plenty of cases where they had decent performances at the top of the roster. Unfortunately for them, they haven't had much consistency at all. Outside of Brian Giles and Andrew McCutchen, only two players have led the team in rWAR in consecutive years--Jay Bell and Denny Neagle. While this seems irrelevant at first, it feeds into the most consistent theme for the Pirates over the past two decades: they haven't been able to retain their stars--that or their promising stars completely fell off the table. Here are some highlights:

Aramis Ramirez: frustrating 1.9 rWAR in Pittsburgh. Traded to Chicago Cubs on July 23rd, 2003 with Kenny Lofton for Matt Bruback, Jose Hernandez, and Bobby Hill. Ramirez would go on to have 23.6 rWAR in just over eight years in Chicago.

Jason Bay: 17.3 rWAR in Pittsburgh in just over four years. Traded to Boston in 2008 in Manny Ramirez trade so the Pirates could avoid paying him a large free agent contract in 2009. The Pirates got Andy LaRoche, Bryan Morris, Craig Hansen, and Brandon Moss--who is now raking in Oakland.

Two major things have helped the Pirates completely turn things around. Firstly, they have been absolutely nailing first round draft picks since 2003. Secondly, they finally managed to retain a star before he got close to free agency. Let's start with a look at how the Pirates have been drafting in the first round:

2007: Daniel Moskos (27 years old--he's struggled mightily with command in the high minors as a reliever)

2010: Jameson Taillon (currently one of the highest-rated pitching prospects in the minor leagues)

When you pick inside the top 11 every year for over a decade, you better nail a few of those draft picks. In relative terms, this was a fantastic draft decade for the Pittsburgh Pirates. The players on the 2013 roster--Walker, McCutchen, Alvarez, Sanchez, and Cole--have combined for 12.7 fWAR. While McCutchen makes up the bulk of that, three of the team's top five position players were first round draft picks in the last ten years. They've been clicking on all cylinders in the draft.

The second major part of turning things around involves one of those draft picks specifically: Andrew McCutchen. McCutchen has grown into a perennial MVP candidate, which is something that--perhaps coincidentally, perhaps not--the Pirates have not had since Barry Bonds in the late 80's and early 90's. The key to McCutchen as it pertains to the Pirates is his fantastic team-friendly contract--6 years/$51 million with a 2018 team option.

Rather than having to fight in arbitration or agree to a large contract after McCutchen's breakout 2012 campaign, the Pirates signed him to a deal that allowed them to pay him $4.5 million during the 2013 season. By paying $4.5 million for what should finish as over 7.5 wins in value, the Pirates freed themselves up to make a slew of other moves to address needs.

While the draft picks and player development are nice, it is very difficult to build a winner without making at least a couple of intelligent free agent signings and trades. In the 2012-2013 off season, the Pirates may have been better at doing these two things than any other team. The team signed three key free agents this winter that have served as cornerstones of their 2013 roster: Francisco Liriano, Russell Martin, and Jason Grilli. They also traded for the likes of Vin Mazzaro and Mark Melancon.

These five key additions have contributed 11.2 fWAR with three of the players being relief pitchers. Grilli and Melancon are both on pace to be relievers with 2+ wins in value produced--in all of MLB, there might not be more than 12 of these at the end of the 2013 season. Now, adding wins always sounds good, but what was the cost? Well, here is what the Pirates gave up for each individual player:

In 2012, Rod Barajas and Michael McKenry allowed 154 of 173 runners to steal bases on them. That's 89% in a sample of 173 runners! In 2013, Russell Martin has completely flipped that switch. He's caught 33 of 76 would-be base stealers, which is good for 43% (14% better than league-average).That point is tied to this next one: yes, first instinct is to say that the 2013 Pirates have lucked out with their pitching staff. However, this kind of massive turnaround is a huge deal.

In the case of the relievers and the "Shark Tank", maybe we can chalk up their great performances to random chance. However, it's easy to figure out why some people may have doubts about that. The Pirates' relievers have a 79.7% LOB% which is 4.5% better than league average and good for fourth in the league. This could be--but might also not be--directly influenced by the drastic improvement of the running game. It's harder to play so-called "small ball" against one of the best defensive catchers in the league.

Lastly, there's arguably the biggest reason for the Pirates' turnaround in 2013: Fransico Liriano. Perhaps this is a one-year magical reemergence that just so happens to be tied in to a glorious Pirates season. However, the evidence seems to simply support that Francisco Liriano is back. He's not pre-surgery Liriano with nearly 11 K/9 and a plus walk rate, but he has been absolutely stellar for the Pirates with a 9.20 K/9 and a 0.40 HR/9. It's easy to scream "SAMPLE SIZE" in any argument against him, but putting up a 2.74 FIP and 3.08 xFIP over 136 innings in the majors doesn't just come as a product of dumb luck.

In fact, there are some changes Liriano has undergone in his steps towards coming back. For one, he's throwing his slider at an average of 86.7 MPH, which is something he hasn't done since before he had his surgery. Secondly, he's doing the same thing with his change--which is being thrown at 86.4 MPH. It could just be that he's going for broke at 29 years old with the realization that he doesn't have a contract beyond this year, but it could also be this:

This is a side-by-side comparison of Liriano's release points with 2012 on the left and 2013 on the right. The difference appears subtle, but Liriano is releasing the ball with greater horizontal elevation this year than he was last year. While he is still hovering between five and six feet, it appears that the average release point is closer to six feet in the air than five feet in the air like he was in 2012.

Marlon Byrd Dealt to the Pirates 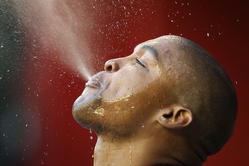 This is nice, but is it sustainable?

This is where the Andrew McCutchen deal goes from a great deal to a franchise-changing deal. Through 2018, the highest salary Andrew McCutchen will earn--unless a new extension is agreed to--is 14.75 million dollars, and that is a team option in 2018. If McCutchen really is going to be a seven-win player through his prime--which seems darn likely at this point--then the Pirates have all kinds of options. McCutchen will be 27 next year, so let's say--going by age curves used in the past--he produces between 25 and 30 wins in value over the next five seasons. If that were to be the case, the Pirates would be paying $59 million for those wins. That comes out to roughly two million dollars per win, which is an incredible ratio given the player at hand would be producing between 5 and 6 wins on average--using a conservative estimate.

Now here's the fun part. The average age of Russell Martin, Neil Walker, Pedro Alvarez, Starling Marte--whom I have not addressed here yet--Andrew McCutchen, and Gerrit Cole is a dazzling 26 years old. The strongest part of the team's core is just now entering its collective prime. Let us also not forget that the Pirates still have plenty of talent in the minors. Minus Gerrit Cole--who has graduated from the system--the Pirates had four players on Baseball America's top 100 list entering the season--Jameson Taillon, Gregory Polanco, Alen Hanson, and Luis Heredia.

While Francisco Liriano may be tough to bring back at a decent price--given he'll be a left-handed starter who is coming off of a big year--the bulk of the Pirates' talent should be back for 2014. In addition to that, they don't experience any major jumps in salary due to back-loading contracts.

So in a word: yes. This success is sustainable, and there is plenty of room for the Pirates to truly build a consistent contender.

For the first time since I was a year old, the Pirates have put together a winning season. As to how they've done it it's easiest to say this way: they managed a business like a business should be managed. They used talented front office professionals to build assets. They then used some of those assets to acquire bigger and better assets while at the same time investing wisely on the open market to top it all off. Baseball is a complicated sport with an even more complicated business model. However, what the Pirates have done here is brilliant while--at the same time--not complex. They were responsible with their assets and generated a front office that knows how to spot and handle talent. These are not the Pittsburgh Pirates of the past. These guys are winners, and they are going to continue to be winners.

Neil Huntington fully deserves to be the executive of the year, and while Pirates fans may still be bitter towards him--and rightfully so-- Dave Littlefield deserves some of the credit for a couple of positive picks and trades that have helped the Pirates out.

A thank you to Fangraphs and Baseball Reference for the information that went into this article.