Zack Greinke does it all

The Dodgers' big offseason acquisition struck some as a bit pricey, but Zack Greinke has brought more than just his right arm to Chavez Ravine in 2013. He might even be baseball's most complete player

Share All sharing options for: Zack Greinke does it all

Some questioned the wisdom of giving Zack Greinke 6 years and $147 million this offseason, in part because expensive long-term deals for pitchers are riskier than investing your life savings in a brick and mortar bookstore, but also because Zack Greinke has tended to perform worse than his fielding independent numbers during his career. The deal may still sting the Dodgers--as much as anything can sting a franchise with billions upon billions-- but this year Greinke has paid dividends in his own unique way. He is baseball's renaissance man.

In July, Jeff Sullivan at FanGraphs wrote about Zack Greinke's Babe Ruth Season and called attention to his impressive offensive performance. As Sullivan notes-- relative to league average--Greinke had a better wOBA in 2013 than Ruth did in his very best season. Sample size caveats are necessary, but in the last month and a half Greinke has maintained his offensive excellence.

He walks as much as he strikes out and is delivering a .414 OBP and 132 wRC+ from the pitcher's spot. His fWAR is 1.1, which as Sullivan noted is now just 0.3 back of the single-season Interleague Era leader at 1.4. Greinke could be having the best offensive season by a pitcher since the leagues started playing each other, but he is also having the 180th best offensive season by WAR in baseball this year among 919 players to register a PA (all stats entering Sunday).

Isolating that down into FanGraphs' Batting Runs, he's been the 154th most valuable hitter in baseball this season at 2.3. Justin Morneau, who many think might be a difference maker for the Pirates down the stretch only has 2.0. Greinke isn't just baseball's best hitting pitcher-- he's been a legitimately valuable hitter across only 64 PA this year. He's 148th in WPA among all hitters and 196th in RE24.

I won't break down Greinke's swing and discuss his approach as Sullivan covered that very nicely, but it's worth pointing out that Sullivan missed some very low hanging fruit for his Greinke-Ruth connection. Greinke is having this otherworldly offensive season while being an excellent pitcher.

Greinke has posted an ERA better than his FIP for the first time since his amazing 2009 season and he's doing it with a slightly better BABIP than his career norms. Some of this improvement is likely based on defense and returning to a pitcher friendly park, but whether you look at his team dependent numbers or his fielding independent numbers he's having a very strong season. In fact, the real problem with his numbers is that he missed several starts after Carlos Quentin attacked him in April and broke his collarbone. A full season at this pace would wind up being worth somewhere between 3.3 and 5.3 WAR depending on which type of pitching WAR you prefer.

While defensive data on pitchers is somewhat limited, Greinke grades out well in that department. In 154.2 innings this season he has 7 defensive runs saved (DRS). UZR data isn't available for pitchers so it's a bit more difficult to verify this performance, but it is very much in line with his previous defensive skill. 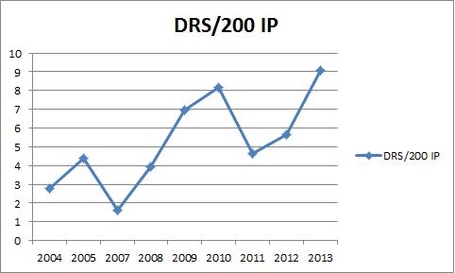 Even if you don't feel great about his 2013 number, it's certainly in the ballpark given his past performance at the season and inning by inning rates. Most would agree that Greinke fields his position quite well, even if there isn't perfect consensus on exactly how well.

While we tend to give credit to guys like Mike Trout and Troy Tulowitzki when we talk about the best all-around players in the game, Zack Greinke is probably that concept in the truest form. He's one of the better pitchers in the game, is very good with the bat, and fields his position well. Small sample issues, sure - but he is an above average hitter, pitcher, baserunner, and defender in 2013.

Some rough back-of-the-envelope math gives you the following: Greinke has been worth 1.1 fWAR on the bases and at the plate. He's been worth 2.4 fWAR and 3.8 RA9-WAR on the mound and has accumulated 7 DRS all across 154.2 innings of baseball in 2013. Even taking the most conservative estimates, Greinke can claim he's added about 4.3 WAR to the Dodgers despite missing several starts. If we're being more generous, he could already be closer to 5.6 WAR.

Greinke's offensive strides in 2013 likely aren't sustainable in the long run, but they count for the Dodgers whether or not we expect them to continue. They probably didn't spend much time thinking about his offensive value when they drove the Brinks truck to his house, but this is a small yet interesting market inefficiency I've been thinking a lot about this season. No one will suggest that the Dodgers got a bargain for Greinke, but he's a good illustration of the potential bargain an excellent offensive pitcher could bring.

The market pays for what pitchers do on the mound, but what they do at the plate and on the bases can be meaningful, especially for teams at the critical point on the win curve. This isn't going to change the face of baseball like the realization that walks are pretty important, but it does offer a chance for an entrepreneurial GM who wants to pick up a little extra value for minimal cost.

Greinke is having a Babe Ruth kind of season at the plate, but he's also having it because he's pitching and hitting at an above average rate at the same time. Mix in his great defense and you're left with quite the cocktail. He's not baseball's most valuable player, but he's certainly a lot more valuable than you might think when only considering what he does atop the mound.