After back-to-back seasons of bad luck, injuries, and underperformance, the Angels are finally playing in a way that befits their talent and payroll.

One could be forgiven, after two disappointing seasons, for expecting the Angels to fall flat again in 2014. Massive contracts handed out to Albert Pujols and Josh Hamilton in recent years had resulted in back-to-back underwhelming seasons, and even the best player in baseball (whose talents have evoked more than a few glowing articles at this here website) couldn’t rescue an old roster devoid of quality pitching.

The team’s expensive offense also underperformed, and the A’s, whose payroll was less than half of their divisional rivals, won 18 more games than the Angels on the way to a second straight AL West title in 2013.

The Angels’ offseason didn’t spark much excitement, either. GM Jerry DiPoto traded for David Freese, a decent bounce-back bet at third base, but not a player who could help improve the club’s fortunes on the mound. In 2013, the Angels finished in the bottom 10 among Major League clubs in ERA, FIP, and xFIP, with the likes of Joe Blanton and Jerome Williams combining for 45 starts.

In response, DiPoto traded for young starters Tyler Skaggs and Hector Santiago to add depth to the squad’s starting rotation. Skaggs had found little success during his brief time in the majors, while Santiago hardly represented the type of front-of-the-rotation starter the Angels seemed to need. With a payroll heavily invested in major league talent and a roster built to win now, many believed the Angels had once again failed to fortify their rotation enough to contend in a crowded AL West picture.

Nearly eight weeks into the season, however, the Angels have proven to be a better, deeper ball club than in years past. With the Rangers falling prey to numerous injuries and the AL East looking more middling by the day, the Angels look like strong playoff contenders, even as the A’s threaten to run away with the division.

The team’s biggest boost has come from Garrett Richards, who has excelled after finally being given the opportunity to start on a full-time basis. Richards is among the hardest throwers in baseball (he has the fourth-highest average fastball velocity among MLB starters), and he has been able to combine his big fastball with both a sinker that gets ground balls and a devastating slider.

In years past, Richards has struggled to get lefties out, a deficiency he has improved mightily in 2014. Lefties hit .276/.341/.410 against Richards in 2013, but the right-hander has held them to a .184/.263/.255 line this season, allowing just seven extra-base hits. Throwing his sinker over 55% of the time against lefties, Richards has buried the pitch down in the zone, getting loads of ground balls (64% of balls in play off the sinker have been on the ground) and avoiding hard contact in the process. 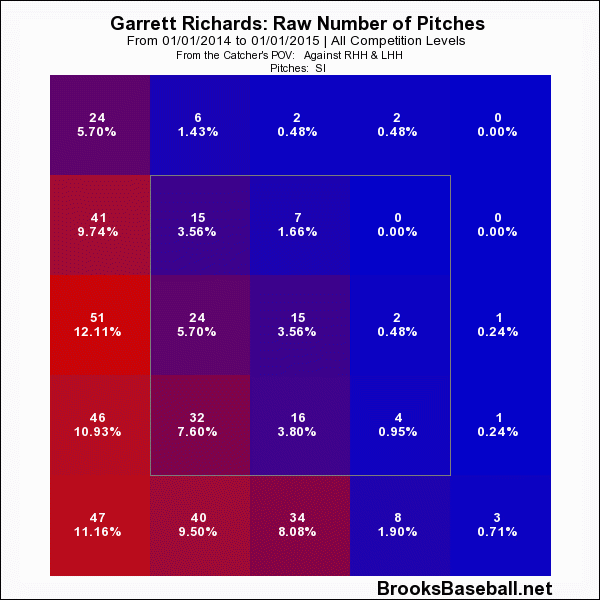 Such improvements have allowed Richards to post a 71 FIP- through nine starts and help carry an Angels rotation that is also getting positive contributions from Jered Weaver, C.J. Wilson, and Skaggs, whose velocity has jumped nearly three miles per hour since last season after the Angels helped him make some mechanical adjustments.

Tyler Skaggs and the value of a fastball

Jeff examines the improvements Tyler Skaggs has made on the mound, most notably with his fastball.

Tyler Skaggs and the value of a fastball

Armed with a rotation that is giving them a better chance to win each night, the Angels’ offense has also rebounded. Through Thursday, the Angels ranked second in the AL in runs per game (4.93) and third in wRC+ (109). After struggling through an injury-plagued 2013, Albert Pujols has found his power stroke, belting 13 home runs and posting his highest ISO since 2010. The slugger has also cut down on his strikeouts, with his current 10.8% rate marking his lowest since 2011.

Along with Pujols, veteran Howie Kendrick has bounced back, while Chris Ianetta and Hank Conger have formed a solid platoon behind the plate. Meanwhile, Colin Cowgill is getting on base at a near-40% clip, as Hamilton works his way back from injury. And even Hamilton impressed before landing on the DL, showing a surprise ability to take a walk along with his usual power.

All these pieces give the Angels just what they expected to have when they spent big on free agency in recent offseasons: a formidable offense that can wear down opposing pitching. With a starting rotation that is keeping them in games, the Angels are reaping the rewards of some (long overdue) positive regression in their lineup.

Not everything will come easy for the Angels the rest of the way. They remain an arm injury, or two, away from having pitching problems once again, and the A’s aren’t going anywhere after racking up a +99 run differential before the calendar hits June.

Yet the Angels’ success hasn’t been a fluke, and behind Oakland and Detroit, they look like the best bet to make the playoffs out of any other AL squad. Baseball Prospectus currently gives the Angels a 78.8% chance of making the playoffs, and with Hamilton rehabbing down in the minors, they are in for another boost in the coming weeks.

It might have taken over two years of bad luck, injuries, and underperformance, but the Angels are finally on the road toward postseason contention.

All statistics courtesy of FanGraphs and Baseball Reference unless otherwise notes.

Alex Skillin is a writer and editor at Beyond the Box Score. He works as an Editorial Producer for MLB.com and also writes for SB Nation's MLB hub. You can follow him on Twitter at @AlexSkillin.