Most award prognosticators are worrying about the All Star Game, but let's look further ahead.

Monday I discussed my thoughts on who will win the MVP awards, and today will make my Cy Young predictions. Pitching is far more volatile than hitting and subject to more in-season variation, so I'm very comfortable stating that I'm sure these predictions will not turn out to be true.

Beginning with the American League, I'll focus on a few select stats. All data is from FanGraphs and through games of Monday, June 9th: 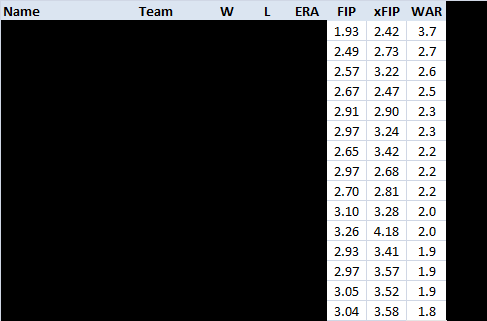 Included are the traditional win-loss record, ERA, fielding independent pitching (FIP) and expected FIP (xFIP), FanGraphs Wins Above Replacement (WAR) along with a mystery stat to be named later.

FIP breaks down pitching to the essence of those items in a completely within a pitcher's control -- minimizing home runs and walks and striking out hitters. Numbers are numbers until they're put in context, and the pitcher at the top of the list in both WAR and FIP has not only put up a phenomenal FIP, it's one of the best since 1950. There's a very healthy gap between FIP number on and number two, around a 30% difference. Generally speaking, most of the pitchers on this list are exceeding what they should be doing going forward, which is what xFIP shows. Sorting the group by xFIP gives slightly different results, but the same pitcher is at the top of the list. That's why I'm comfortable naming this person as my pick for the AL Cy Young award: 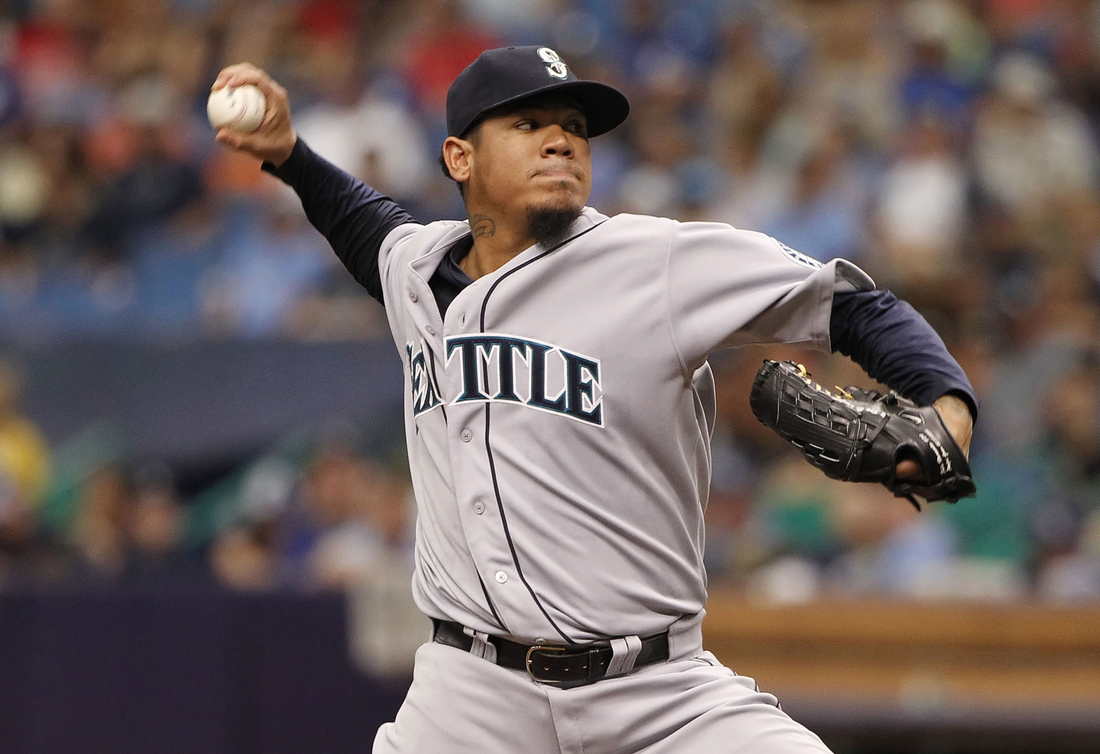 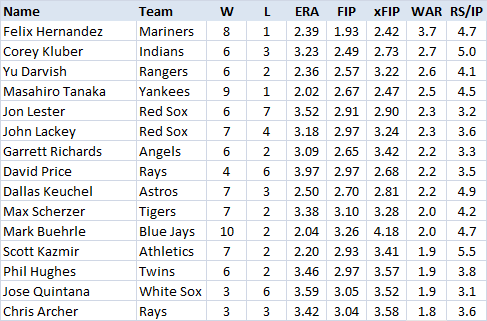 There are times when the traditional pitching metrics point in the same direction as the newer ones, and Felix Hernandez is having one of those years. This chart from Brooks Baseball shows his velocity over time: 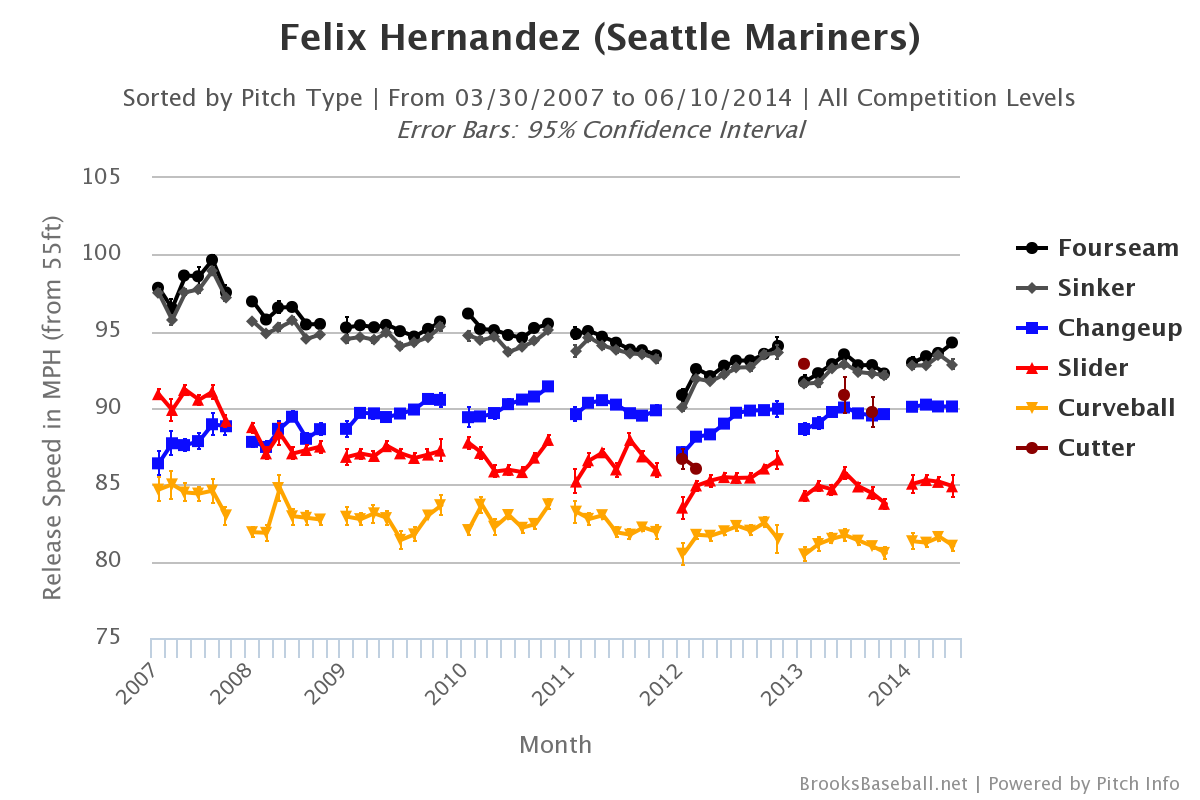 Is his velocity down? Of course it is, which is the natural progression as players age. It's reasonable to ask if the data from 2007 was truly representative, since everything after that depicts a much more gradual decline. Either way, Hernandez is just the latest in an extremely long line of pitchers who demonstrate that velocity by itself isn't necessarily the ultimate determinant in pitching success.

This chart shows how Hernandez has changed his approach, at least so far this year. Prior to 2014 he was the typical power pitcher, throwing hard stuff around 60 percent of the time. He appears to have made a rather sudden shift in approach in the middle of 2013 and increased the percentage of offspeed pitches. One-third of a season is too soon to say if this is permanent, but it helps to remember he's thrown a lot of pitches for a player who's only 28. It's possible he's making the transition from power pitcher to one who uses more finesse. Having written that, note the velocity of his changeup. (hat tip to Mariners pre and post-game host Gary Hill for informing me of and discussing this with me in detail some time back).

The last column shows run support per innings pitched and can be found at this section of Baseball-Reference. It adds context to the traditional win-loss record in that some pitchers, like Scott Kazmir, are helped by decent run support and some hindered, like Jose Quintana. So far in the AL, this doesn't appear to make much of a difference.

It will be a close race and will come down to how both the pitchers and their teams finish. Yu Darvish continues to stun and amaze almost every time he takes the mound, and Masahiro Tanaka has been everything the Yankees spent $155 million on and will be discussed in the Rookie of the Year post. Jon Lester is emblematic of the Red Sox year so far -- relatively effective pitching with a mediocre record to show for it.

The surprise is Mark Buehrle, not that he's among the best in the AL -- he's been doing that his entire career, but that a 10-2 record with an ERA just over 2.00 only places him tenth in this list. Is he better than that? Probably, since his relative lack of strikeouts and low strikeout-to-walk ratio show the limitations of relying solely on one metric like FIP. If he maintains his production and the Blue Jays stay in the playoff chase, he'll be a strong contender no matter what his FIP or xFIP may show and serves to demonstrate that just because a pitcher doesn't fit a given mold doesn't mean he can't have success. 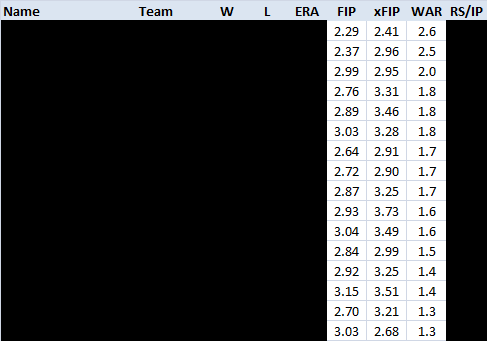 This will be a much tighter race which will most definitely come down to how the pitchers finish the year, since many are bunched near each other at the top. Three are on teams with no prayer of making the postseason, four have pedestrian win-loss records, and even the players near the top haven't truly separated themselves yet. Having written this, this is my prediction for the NL Cy Young, fully expecting it will be someone else: 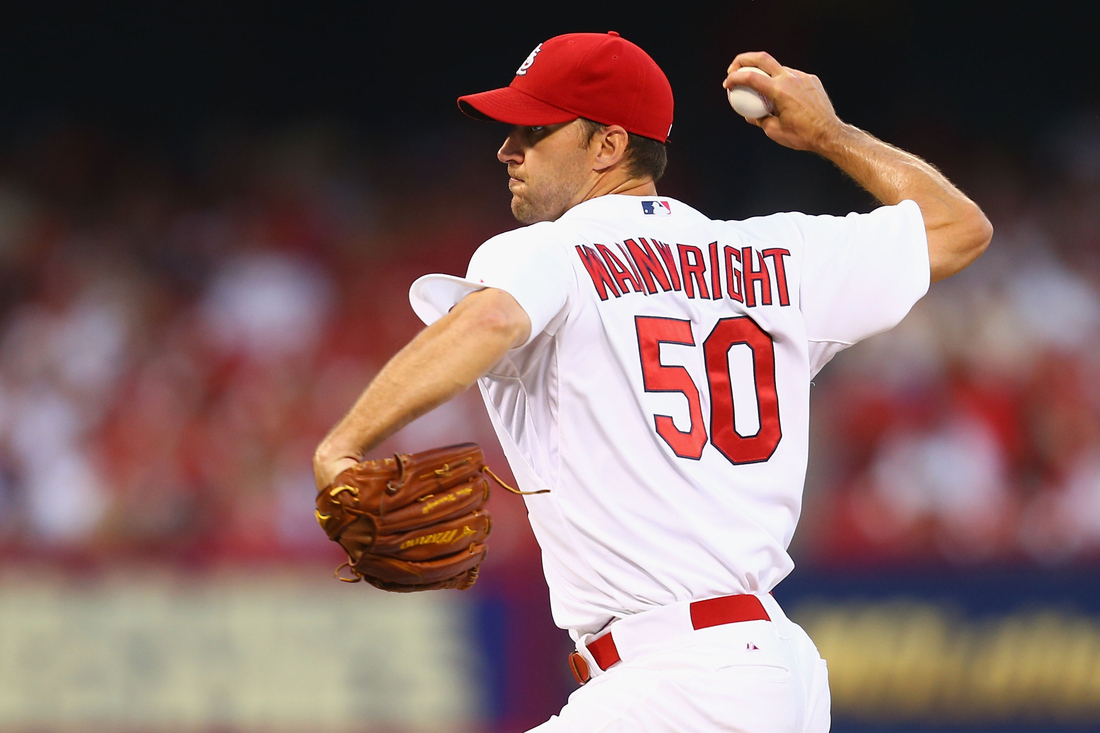 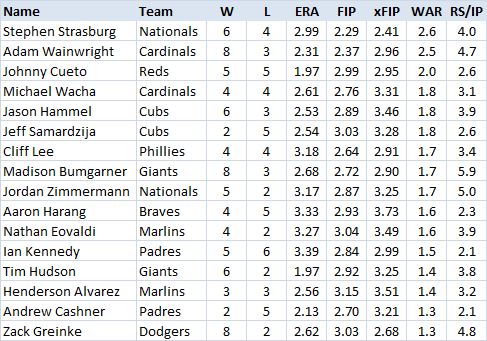 I chose Adam Wainwright because I think he has the best chance at a decent record despite the fact he seems to be the beneficiary of a little luck as his xFIP is rather higher than his FIP. The Cardinals are in the thick of the playoff race and will likely stay so absent unpredictable events, and he has a track record of success.

This doesn't mean some of the other pitchers aren't just as deserving. If Stephen Strasburg can stay healthy, I'm sure there's pent-up willingness to vote for him, since he's been watched closely since his debut in 2010. He's had an intriguing mix of injuries, bad luck, and teams not good enough to contend, but he appears to have all the factors in his favor. I probably shouldn't assume he'll get injured at some point, but with his background I can't categorically state he won't.

Very rarely will two pitchers on the same team epitomize the vagaries that looking solely at a win-loss record can create like Jason Hammel and Jeff Samardzija. Their numbers are eerily similar except for run support, and even though the Cubs' support of Hammel hasn't been outstanding, it's 50 percent better than what they've delivered for Samardzija. This is the flip side of the Mark Buehrle discussion, where looking at the peripherals can be far more illuminating in evaluating pitcher effectiveness -- very similar ERA, FIP and WAR and records that are as different as night and day.

Thirty years ago tomorrow (Friday, June 13th) the Cubs traded Joe Carter and Mel Hall to the Indians. Hall and Carter were young talent, and people were rightly curious that the price seemed high for what they received in return -- relief pitcher George Frazier, backup catcher Ron Hassey and a pitcher with a career record of 57-45 and a 4-5 record at the time of the trade. Of course, Rick Sutcliffe went on to finish 16-1 with the Cubs and lead them to the National League playoffs, and that kind of finish was one nobody could have predicted. Likewise, at this time last year I chose Clay Buchholz and Adam Wainwright as my Cy Young choices, not knowing that Buchholz's season was essentially over or that Clayton Kershaw (and the rest of the Dodgers) would go on a historic run to catapult themselves into the playoffs. When it comes to pitching, anything can happen -- this is how I see it for now.