As roster construction evolves, are the days of the dedicated designated hitter who truly plays no position numbered?

Share All sharing options for: Is David Ortiz the last designated hitter?

As I enter play-by-play data, occasionally items jump out that catch my attention. I first noticed an interesting trend last year when it appeared the Baltimore Orioles were using the ninth slot in the batting order for the designated hitter. In fact, they had an intriguing pattern of DH use:

This does not include the 10 games played in National League parks in which the DH wasn't used, and includes only players who started at DH. It struck me as odd to use a DH outside the prime hitting slots of third through fifth well over eighty percent of the time. This chart shows how often the DH batted in slots three through five since its inception in 1973: 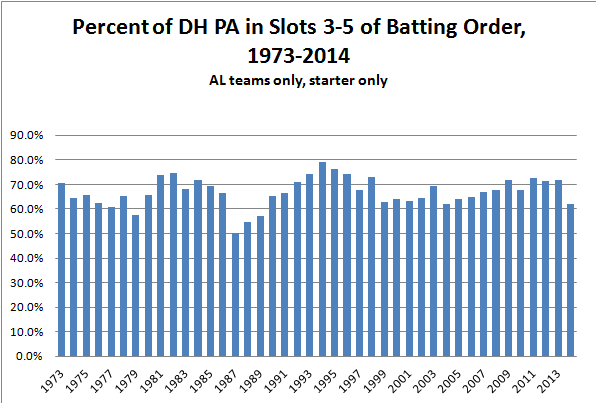 AL teams only, 2014 data through Thursday, May 1st

Generally speaking, teams batted the DH in the prime hitting positions around 70 percent of the time, but that percentage has dropped precipitously in 2014. It's still early in the year, but is it possible attitudes toward the DH are changing?

The answer is yes, and for a very simple reason. As teams carry more pitchers, every roster spot on a team's bench increases in value and requires greater versatility. Consider the spare parts every team needs -- backup catcher (or two), utility infielder, utility outfielder, left-handed pinch hitter, perhaps a pinch runner. This is difficult to accomplish if teams carry twelve pitchers -- teams have seven roster needs with only five roster spots. The cost of the twelfth pitcher is that bench players have to be able to fill multiple roster needs, including DH. This is why players like White Sox Alejandro de Aza are valuable -- he can play all three outfield positions and pinch-run. The Sox would never get much in return if they were to trade him, but having versatile players like him who can fill multiple roles allows them to carry Adam Dunn, Paul Konerko and Jose Abreu to play two positions.

Going back to the 2013 Orioles, this is who they used at DH and in what batting order position:

They used a designated hitter by committee approach to allow them to fill multiple team needs and not tie themselves down with one player whose only value was with his bat. The Orioles weren't unique as other teams took a similar approach, demonstrated in this chart which shows the number of DHs with 400+ plate appearances over time:

Fewer non-pitcher roster spots makes DH specialization a luxury teams are choosing to forego. When the DH was first established it was seen as a way to keep older hitters like Hank Aaron, Orlando Cepeda, Frank Robinson and Tony Oliva in the game, but that's changed. The current crop of dedicated DHs is headed by David Ortiz and includes Billy Butler, Adam Dunn and Victor Martinez -- after that, teams are using spare parts. Of these players, only Butler is under 30, and none of the DHs used in 2013 were young players getting set to be professional hitters for the next 10-15 years.

I suspect David Ortiz, or certainly Billy Butler, will be the last true designated hitter. If teams continue to carry twelve pitchers a roster spot is simply too valuable to use on someone other than an out-of-this-world hitter like Ortiz or Edgar Martinez, and if players are only marginally above replacement level as hitters, it makes sense to use players who can contribute in other areas. It seems to be true even at the minor league level -- Daren Willman's MLBfarm.com site has none of the top 100 prospects listed as a DH.

When Ortiz eventually retires the debate on enshrining designated hitters in the Hall of Fame will begin again, although Jim Thome will get it started when he becomes eligible in 2018. Edgar Martinez hasn't received much support in his five years on the ballot:

The times, they are a-changin' -- as recently as 2007 players like Frank Thomas, Gary Sheffield, Travis Hafner and Jose Vidro (?) had at least 500 plate appearances at DH, but that seems like a distant memory today. It's always dangerous to predict the last of anything -- in 1963 Early Wynn predicted he'd be the last 300-win pitcher, and other than the ten pitchers who came after him who met that standard, he nailed it. Maybe the day of the dedicated DH never existed, since there have only been 24 players (min 1000 career PA) with at least fifty percent of their career plate appearances as a DH. Absent unforeseen changes in roster size or philosophy, Ortiz could be the last.

Data amassed using the Play Index feature of Baseball-Reference.com. Any errors in compiling the data are the author's.