Maybe Jeff Samardzija is an ace after all

Jeff Samardzija has erased any questions about how valuable a starter he is. What has he done differently this year to establish himself?

Share All sharing options for: Maybe Jeff Samardzija is an ace after all

The calendar in the young 2014 Major League Baseball season turned to June just barely over a week ago, but we have been able to say with complete certainty for quite some time that Chicago Cubs starter Jeff Samardzija will be traded before the end of July. If the Cubs' recent tactics are any indication, he will likely be traded well before the July 31st non-waiver trade deadline.

The line of thinking in regard to a potential Samardzija trade used to be that the Cubs were going to find a team that would overpay for Samardzija, a quality pitcher, to be sure, but certainly not an ace. With an additional year of control, they'd get a team to overpay more than they did when they sent Matt Garza to the Texas Rangers last season. But with what Samardzija has managed to achieve in the early-going of the 2014 campaign, the Cubs are going to get an even more impressive haul for their ace than previously thought.

Samardzija has become the poster boy for the "kill the win" movement, with just two on the year, but he has been absolute dynamite on the hill for the Cubs thus far. Formerly thought of as a de facto ace because the Cubs didn't have anyone better, Shark has firmly established himself as one of the top pitchers in the game and not simply the beneficiary of being the best pitcher on a terrible baseball team.

What has changed for Samardzija? This is a guy coming off of two very solid seasons as a starter, but nothing near what he's managed to do this year. His line for the year really is something to behold:

There are some interesting things happening here. In most respects, he's miles better than he's been at any point in his career, with only one number there actually declining for the worse. His ERA is miles better than it has been in either of the last two years (3.81 and 4.34, respectively), and both his FIP and xFIP indicate that that number isn't an anomaly—he really has been as good as indicated.

His strikeout numbers are down (career 8.55 K/9 career average), but are still respectable, and his walk numbers are way down, no doubt a figure to which we can attribute his success. Another number worth noting is his FIP-, which currently resides at 77. His career best before this year was 88, which was back in 2012, helping to illustrate the considerable improvement from Shark.

As far as his pitch selection and effectiveness, there is a lot to be said about what has allowed Jeff Samardzija to succeed on this level. For one, his heat is as effective as ever, as he ranks tied for seventh in the league in average fastball velocity, at 94.3 miles per hour. He's utilized his four-seam fastball a great deal less in favor of a sinker, as well as increasing his cutter usage. The following, from Brooks Baseball, represents his pitch selection in 2013 and so far this season: 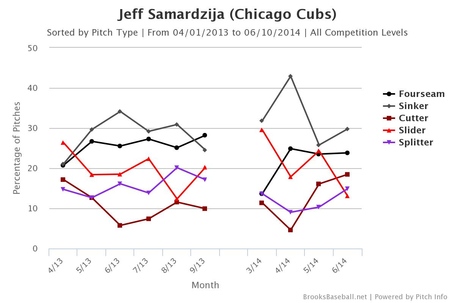 That increase in sinker, as well as his underrated splitter, usage has led to an increase in his ground ball rate to the highest figure of his career, currently 50.8 percent. His strikeout numbers are down, but he's letting a Cubs defense that has improved by leaps and bounds over the last few seasons do some of the work for him.
Even with his strikeout numbers declining, Jeff Samardzija has managed to become a much stronger pitcher in 2014. An arm that doesn't have a ton of mileage on it, given that the last three years, including 2014, represent his only real years as a starter, Samardzija is absolutely the prize he appears to be on the trade market. With just a little bit of retooling, Samardzija has gone from a guy who was only an ace in label, due to his status on a poor ball club, to one who certainly has the ability to fit into that type of category.
A trade to a strong defensive club—such as Baltimore—could help Jeff Samardzija to showcase even more improvement. That shift to more of a sinker/cutter combination could certainly be the explanation for that improvement. He hasn't changed much in terms of what he has in his arsenal, just how he's using it, and it has helped him for the better. Just imagine the haul the Cubs are going to get for this guy when it's all said and done.

Randy Holt is a staff writer for Beyond the Box Score. You can follow him on Twitter @RandallPnkFloyd.