We break down what brought Jordan Zimmermann to near perfection in his complete game win Sunday over the San Diego Padres.

Share All sharing options for: Breaking down Jordan Zimmermann's near-Maddux

Washington Nationals righthander Jordan Zimmermann put together an impressive outing over the offensively hapless San Diego Padres Sunday, culminating in a 6-0 win that saw the starter put up nine innings of two-hit ball, to go along with no walks and 12 strikeouts, a career high. Flirting with a perfect game into the sixth inning, Zimmermann's 112-pitch outing found him missing pitching a Maddux by 13 pitches, but tallying up a game score of 95, beating the previous Nationals team record of 92 by John Patterson, who threw a four-hit, no-walk, 13-K shutout on August 4, 2005.

From a pitch selection perspective, the outing from Zimmermann was one that mimicked his previous 2014 starts, mixing four pitches—a fourseamer, slider, curve, and changeup—with the brunt of the work done with the fastball that averages right around 94 miles per hour:

While there was more of a reliance on the fastball to get the job done in lieu of more sliders on Sunday, overall, we find little in the way of a change in approach leading to the near-Maddux. Movement-wise, we also see nothing spectacular that points to a particular pitch being a wipeout offering for the day; aside from a little extra wiggle from the curve, we find Zimmermann's pitches on Sunday being a little tighter than usual.

Known for his above average command and control, as well as a dogged persistence to not back down to hitters in the form of nibbling the outside corners, let's now look at well he hit his spots Sunday: 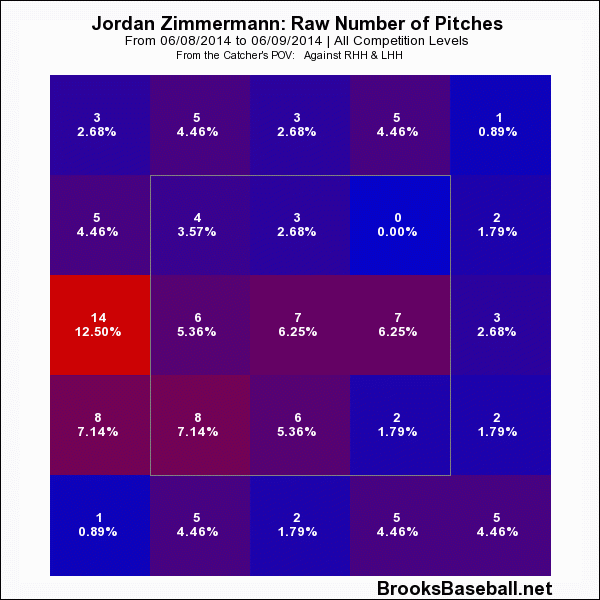 ...compared to his previous starts this season: 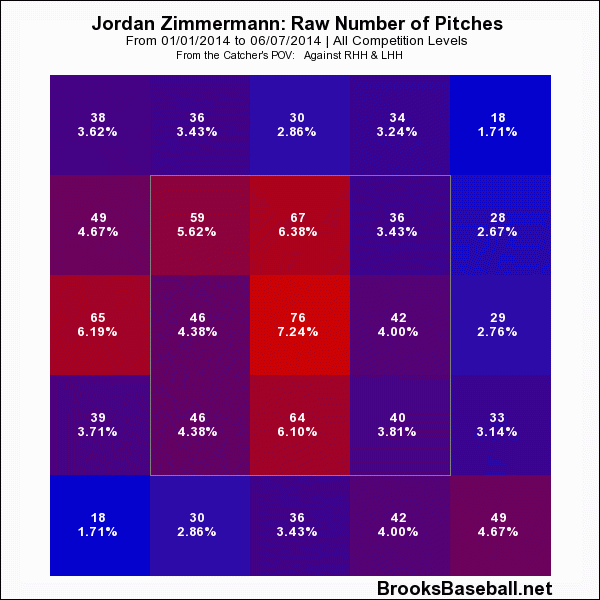 With sample size differences taken in account, we do find Zimmermann a little more adept at avoiding the heart of the plate and hitting the corners with a little more precision Sunday compared to his previous starts; perhaps the tighter movement seen on his pitches played a role in that, putting the righty at a reduced risk of his pitches tailing over the plate simply due to good movement more so than poor command. Along with this surgical precision, Zimmermann's ability to get not only called strikes, but also swinging strikes on Sunday was on display:

The rise in whiffs is particularly interesting from Zimmermann, as he is typically a pitch-to-contact style pitcher; however, this hike in swings and misses, paired with his already advanced ability to throw strikes is what apparently what made the Sunday outing as dominating as it was. Overall, Sunday's gem from Zimmermann was one that speaks to the hurlers talents and capability to perform at this level at any given start; while one could misconstrue the reduced movement on his pitches during the start as a sign of them being 'flat', it appears that it was more of a tightening up of an impressive arsenal and a concomitant rise in his ability to locate all of his pitches for quality strikes, versus strikes over the middle of the plate that remain ripe for solid contact to be made. However you slice it, Zimmermann's Sunday was one for the record books (at least for the Nationals) and one that displayed that power and precision that embodies his repertoire and pitching style.