Henderson Alvarez and throwing a Maddux

We have a look at Henderson Alvarez and his race up the Maddux leaderboard. His pitching approach (few strikeouts, lots of groundballs) puts him in a good position to limit his pitch counts.

Share All sharing options for: Henderson Alvarez and throwing a Maddux

Greg Maddux has completed this pitching feat almost twice as many times as second best Zane Smith; hence, the term a Maddux. It should be noted that a Maddux is a fun thing to count and does not necessarily offer much in terms of predicting future performance. In this way, it is like a no-hitter or a perfect game, just more common. Since integration there have been 344 Madduxes thrown (by 216 different pitchers). While it may not be useful for predicting future performance, you likely noticed that the list of multiple-Madduxers given above includes some excellent pitchers; the top 14 contributed 656.1 fWAR over their careers.

One of the more interesting names on the list is 24-year old Henderson Alvarez. Alvarez is not generally considered an excellent pitcher. He has contributed only 4.6 fWAR in his 3+ big league seasons, but has already recorded 4 Madduxes! As I said, Alvarez is not considered a dominant pitcher, so how is he doing this? From his player page we see that he uses an interesting combination of throwing hard (average fastball velocity: 92.9 mph; 25th highest since 2012), not striking batters out (11.4%; 4th lowest since 2012) and not walking batters (6.2%; 41st lowest since 2012). Alvarez induces a lot of ground balls (55.4 GB%; 8th highest since 2012) by throwing his pitches down in the strike zone (55.3% of his pitches end up in the lower third of the zone). You can see that he attacks the bottom part of the zone in the profile plot below and/or by clicking here. 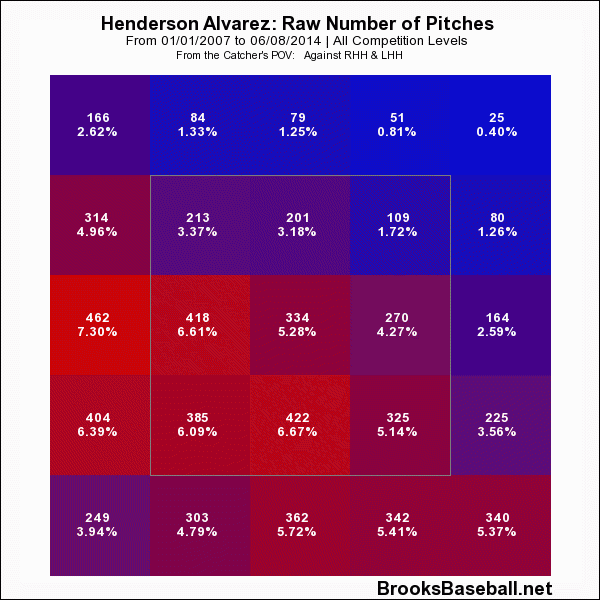 Now, as a general strategy, striking few batters out is unlikely to be effective for very long. However, it does help to limit pitch counts. Strikeouts and walks increase pitch counts and affect how deep into a game a pitcher can throw; in turn reducing the chance for a Maddux. So Alvarez might have just the right combination. Across all Madduxes, the average number of strikeouts recorded is 4.75 (SE = 0.12), and the average number of walks is 0.67 (SE = 0.05). In Alvarez's four Madduxes, he has struck out 16 batters (4 Ks/Maddux rate), and walked two (0.5 BBs/Maddux rate). So even within a Maddux, Alvarez's K and BB rates are below average.

How rare is it to have a high strikeout Maddux? Well throwing a Maddux with 10+ strikeouts has only happened 14 times:

That list contains some really impressive names: 2 Hall of Famers (Bunning, Koufax), 4 players that have a reasonable argument for getting into the Hall (Halladay, Lee, Mussina, Schilling) and a number of players that are or could be in the Hall of Nearly Great.

Stephen Strasburg threw the most recent of these 10+ strikeout Madduxes; at 25 years and 22 days old, Strasburg is the youngest pitcher to achieve the feat. Unfortunately, his may actually be the least impressive performance on the list. Strasburg ranks last on the list, as ordered by GameScore (GSc). GameScore is a metric created by Bill James that attempts to determine the strength of a pitcher's performance by debiting and crediting points for events (e.g., outs recorded, hits allowed, strikeouts, runs allowed). Strasburg allowed five base runners, which led to his GSc (88) being the worst of the group. Koufax's GSc of 98 leads the group. The 10+ strikeout Maddux list re-ordered by GSc and supplemented with relevant statistics is given below.

Presenting the data this way is not meant to discredit Strasburg's accomplishment. He did something on a major league baseball field that only 12 other players have done. That is incredible and should be recognized. I introduced this fact because Henderson Alvarez, of few-strikeouts fame, has achieved GScs of 87 and 90 in his Madduxes. These marks are comparable to a few of the remarkable 10+ strikeout performances. Alvarez may not have retired batters by strikeout, but he was effective in keeping people off the bases in those two starts (3 total baserunners).

So, what does any of this mean? That is a really difficult question to answer. Henderson Alvarez represents a bit of a puzzle. He is probably not one of the first few names that come to mind when thinking of the Miami Marlins. He throws hard but does not strike a lot of batters out, in an era of lots of strikeouts. He has been basically a league-average pitcher for his career but, as outlined here, has accomplished some pitching feats that place his name among great pitchers. This season, he has a chance to tie the record for Madduxes in a season with three. If things go really well, he could break that record. While it may not mean much for predicting his future performance, it is an interesting thing to follow.