Anyone can predict what MVP voters will do in September, why not make it more interesting and try it in June?

Share All sharing options for: AL and NL MVP predictions after two months

As the quantity of baseball data increases and the ease with which it can be accessed improves, it's far simpler for anyone to make educated guesses on future performance. They won't always be right and can't correct for unknowns like future injuries, trades or minor league call-ups, but it's still fun to try. My next series of posts will be my predictions for the end-of-season awards, with Cy Young on Thursday and Rookie of the Year next Monday.

All data is from FanGraphs (FG) and through the games of Friday, June 6th. No pitchers are mentioned, both to save them for the Cy Young post and because none have stood out enough to merit MVP discussion. I'll begin with the American League:

These are the components that make up Wins Above Replacement (WAR) and can be found in the FanGraphs Value tab. They are batting (Bat), base running (BsR), fielding (Fld), positional adjustment (Pos), total offense (Off), total defense (Def), league adjustment (Lg), value over replacement player (Rpl), WAR and FG dollar value based on WAR value, which is approximately $5.5 million per point of WAR in their current model.

Breaking WAR down into its constituent components shows how players are delivering value. Personally, I'm not a fan of the positional adjustment -- it's included to make comparisons between a positions and give credit for positions in which more defense is expected, but it can introduce big impacts on WAR. For example, by the end of the season, a shortstop will get around eight runs and a DH -15 runs which will translate into a WAR difference of around two and a half wins just because of the position played. How the player fielded his position relative to positional average is already accounted for before this adjustment is made.

There's a clear demarcation between the top four and the rest of the field, with three having solid offensive years and one a very good defensive year in a position not noted for defense. Three of the top four are on winning teams, and one is well-known, the other three perhaps not top-of-mind.

Something will happen in the ensuing months to make this a runaway race -- one player will get hot, a team might  catapult into the national consciousness, established baseball writers will begin making their pronouncements. For me, a combination of on-field excellence and the MVP votes of the past two years lead me to believe this player will be the AL MVP: 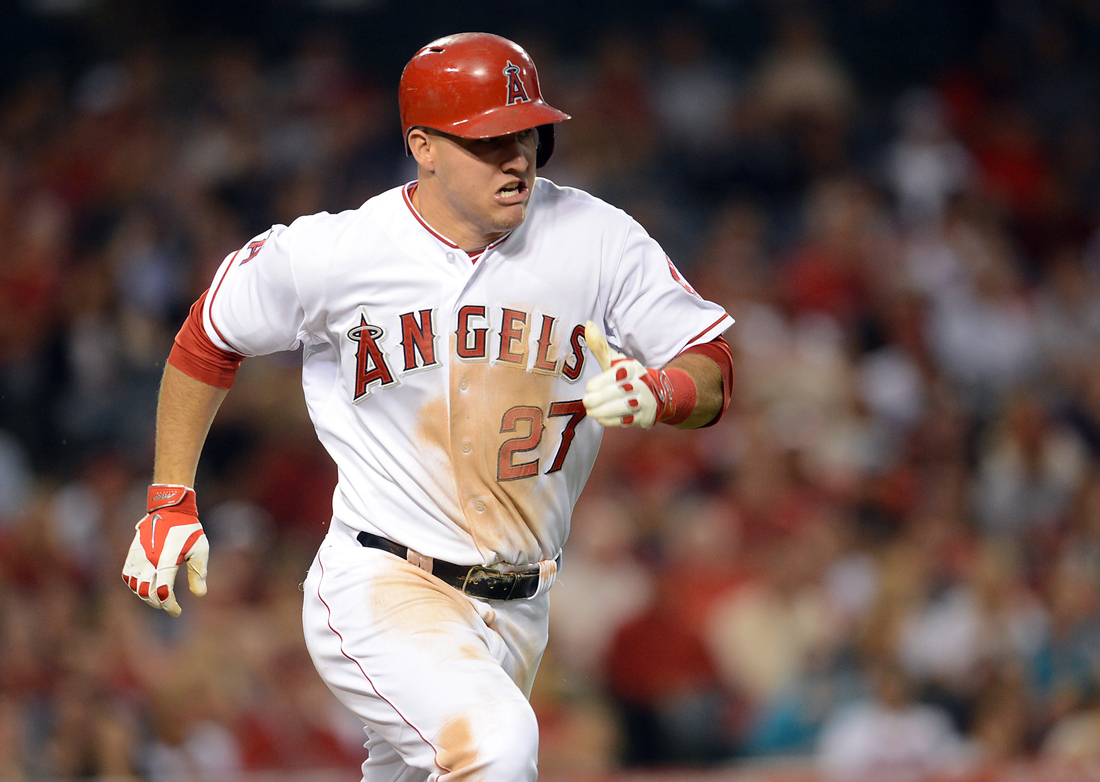 These are the rest of the candidates:

Josh Donaldson will be a strong candidate as the Athletics continue to dominate in the AL West, but the combination of being on the West Coast and playing second fiddle in the Bay Area to the Giants could be his undoing. As a Cubs fan it pains me deeply to recall the trade that sent him to the A's in exchange for Rich Harden, but I'd be lying if I said I had any clue who he was at the time. For what it's worth, Baseball-Reference WAR value has him comfortably ahead of Trout by 1.2 points (4.7 to 3.5). On a strictly objective basis both Donaldson and Mike Trout are having outstanding years, I just think the voting in the past two years will swing votes Trout's way come fall.

Jose Bautista has been productive again after a couple "off" seasons, if hitting 27 and 28 home runs can be defined as such, and if the Blue Jays continue their domination of the AL East, he'll be in the thick of the voting. He was in the top five in voting in 2010 and 2011, so voters are aware of him, but not playing in a major market will be an issue.

Alex Gordon has no chance to be the MVP, not with the Royals floundering in the AL Central with a losing record. He has the second-best fielding rating amongst all players this year. He's fifth in all of baseball in outfield chances, hasn't made an error and is credited with five assists. After being ballyhooed as the next can't-miss player at the beginning of 2007 (and missing), he's established himself as a steady left fielder, winning Gold Gloves the past two seasons. His offensive production is decent, but not enough to get the notice of voters. He'll receive votes, maybe even sneak into the top 10, but shouldn't expect much more.

Players who are shortchanged using this type of analysis are typically first basemen or designated hitters, players who lose WAR points due to the positional penalty. This is why players with solid stats like Jose Abreu and Brandon Moss aren't on this list. I'll certainly discuss Abreu when I write about the Rookie of the Year, and both will get MVP support if they maintain their production because offense carries more weight with votes than any type of WAR-based analysis does.

This is how the National League looks:

Ahh, who am I kidding? 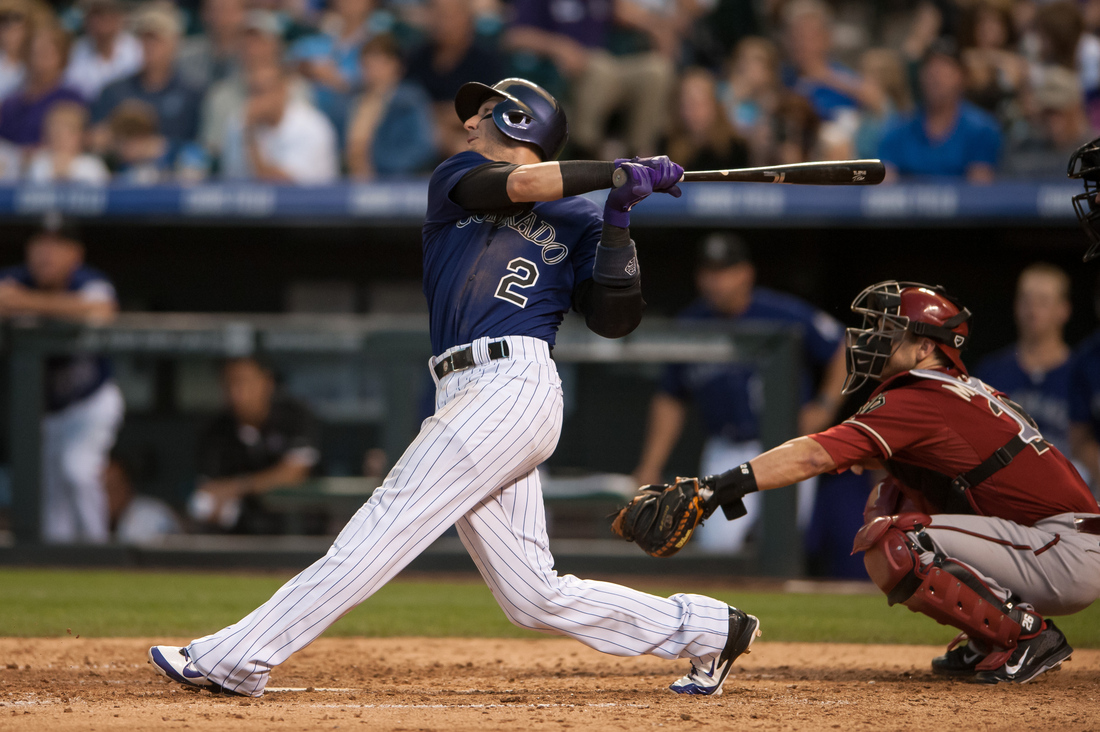 The Rockies aren't going anywhere in October except golfing, but it will be Troy Tulowitzki's award to lose. He's cooled off somewhat since his hot start -- at one point in early May he was on pace for the highest WAR in history by a fairly comfortable margin, but there was no way he could maintain that level of production. He's played more than 150 games in a season just once and is probably due for an injury soon. If he can stay healthy, he's received enough press to overcome any reticence voters may have for voting for a player on a losing team.

To the surprise of almost everyone, Giancarlo Stanton is playing on a winning team. The Marlins have a talented core of young pitching that could be a year or two away from contention, and Stanton is returning to the form he showed before injuries slowed him down in 2013. The WAR bias of shortstop over right field is evident in the approximately half-a-point of WAR Tulowitzki gets just for playing his position, and some voters might be swayed by the raw WAR value without looking into how it's been accomplished.

Depending on how their teams finish out the year, I can easily see Yasiel Puig, Carlos Gomez and Jonathan Lucroy generating significant support. I wrote about Puig recently and fellow BtBS writer Chris Moran discussed Lucroy in this post, but absent the completely unforeseen, making it into the top five is probably the most they can aspire to.

Anything can happen in the next 100 games that could completely upend what I've written, but last year I called Andrew McCutchen and Chris Davis around this time, Davis just because I didn't think the voters would vote for Cabrera back-to-back. The wealth of objective information helps in evaluating players we rarely see and adds context to raw numbers. This will become very evident in my Cy Young post, where a pitcher with a gaudy win-loss record is nowhere near the top of my list and one with a pedestrian record is. Stay tuned.