Data on manager ejections isn't easy to find. This post explores ejections past and present.

Share All sharing options for: Manager ejections: An analysis

There are items in baseball that merit scrutiny for which data isn't easy to come by, at least not at traditional sites like Baseball-Reference.com or FanGraphs. I've always been interested in manager ejections but was never able to easily find data. On a whim, I did a Google search and saw the information had been right under my nose for quite some time -- going to the Manager section of Retrosheet yielded pure gold. In addition to traditional wins and losses, information on manager ejections is included as well. After taking a couple of days to gather and process the data, I found some very interesting information. This first table shows ejections among current managers (all data through the end of the 2013 season):

The records go back to around 1900, and this table shows the managers with the most ejections:

Bobby Cox is well-known as having the most ejections, John McGraw represented an era when men were men, and Leo Durocher and Earl Weaver were well-known for their pugnaciousness, but with few exceptions, managers weren't thrown out with great frequency. Then again, when was the last time a football or basketball coach was ejected from a game?

The priceless part of the Retrosheet data is the explanations for some of the ejections:

This last table is my attempt to quantify the reasons for the approximately 5,000 ejections:

Automation could eliminate many of these reasons, such as pitch calls and most calls on bases. It's not listed, but there were 29 ejections due to disputed home run calls, which also could be eliminated quite easily.

There are many quirks in baseball not present in other sports, such as the lack of a clock, a fixed manner in which offensive players are used and the latitude allowed to argue almost anything. Every time a manager walks on the field to argue a call he adds time to games that are already pushing three hours. It's far too early to tell, but instant replay will have an effect on ejections, but it can go either way. Perhaps the ability to review will lower an umpire's tolerance for "discussion" of the call and lead to more ejections. Likewise, perhaps the ability of managers to have someone telling them whether to argue a call or not could decrease arguments.

There was other information in the data -- in addition to the reason for a manager's ejection, the umpire was included as well. I'll return to that topic in the future, since there has been an incredible shift in ejections over time. This graph gives a clue and shows the percentage of games in which a manager was ejected since 1901: 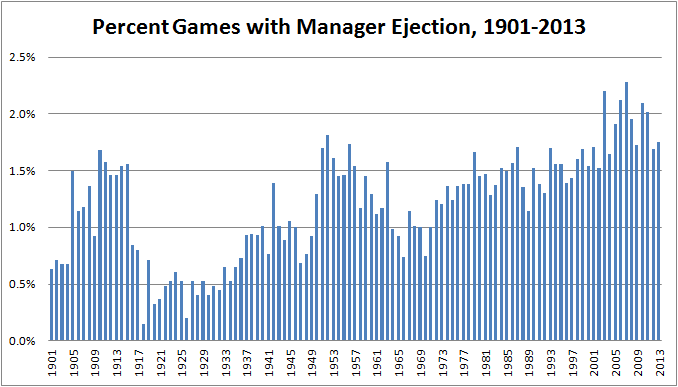 Every ejection requires two participants, a manager and an umpire. When I return to the topic, I'll review this data from the standpoint of the umpires.

All data from Retrosheet. Any errors in compiling the data are the author's.

Scott Lindholm lives in Davenport, IA and is now headed out to the golf course despite being a terrible golfer. Follow him on Twitter @ScottLindholm.