Johan Santana: What can we expect?

The Orioles were the butt of many jokes when they signed Johan Santana to a contract in early March. The club took a flier on the former ace hoping that he could regain the form he had just a few seasons ago for the New York Mets.

Share All sharing options for: Johan Santana: What can we expect?

The Orioles brought this on themselves really. After all, Johan Santana was a laughingstock when his tryouts for interested teams saw him barely topping 80 mph on his fastball. High school kids across the country laughed at his velocity. A quote from the NY Post article linked above:

Tim Naehring represented the Yankees at the workout in which Santana topped out at 81 mph, pitched between 77 and 78 mph and mixed in an impressive changeup.

While the Yankees have questions throughout their rotation, it’s highly unlikely they watched Santana thinking he could be a help this year.

Santana was coming back from injury, a fact often ignored as Twitter colluded to slam Santana's chances of being an impact arm for any team this season. The injury, however, only gives more credence to their argument. After all, this is the second time in under three years that Santana had surgery on a torn capsule in the shoulder of his throwing arm. Shoulder injuries are really scary, with some believing it's much easier to come back from elbow injuries (like a torn UCL requiring Tommy John surgery) than a shoulder. Former big league ace Chris Carpenter mentions the difference between the two types of injury:

With your elbow, you go through the program, get the range of motion back and do some wrist [exercises], and the pain goes away, everything feels good and off you go,'' Carpenter said. "When you get into the shoulder, it's a flip of the coin.

All of this lead many to discuss the rationale behind giving $3 Million to a pitcher coming off of two shoulder surgeries who hasn't pitched in Major League Baseball since 2012. Recently, though, the Orioles purchased Santana's contract and placed him on the 15-Day MLB DL. They did this because Santana had opted out of his minor league contract assuming that a team would pick him up after completing his rehab.

Santana is eyeing an MLB debut with the O's as soon as June 18th, although it will likely fall a day or two after that. So this has all been a lot of build up to: what can O's fans expect from Santana this season?

We'll start by looking at his stats over his past few seasons:

We see with Santana's GB/FB ratio, that he has never really been a groundball machine. In his past three MLB seasons though, he's posted numbers that are much lower than his career rate, which typically hovered around 0.90. His HR/FB rate is right around his career average, which bodes well for pitching half his games in Camden Yards.

One interesting note is that in 2012 Santana saw a spike in his strikeout rate, but one that was coupled with an increase in his walk rate as well. For his career, Santana was basically a 2.50 BB/9 guy, but many of those seasons saw him striking out more than a batter per inning as well. 30+ year old Santana isn't the strikeout threat he once was, but it will be interesting to see if he's more of the 2010 version or the 2012 version when it comes to strikeout to walk ratio.

I'd be remiss if I didn't at least mention that Santana's FIP basically pegs him as a 3.50 to 4.00 ERA guy, which makes some sense. Over those three seasons where Santana presumably dealt with shoulder soreness and/or rehab from shoulder surgery, his stats and underlying traits seemed to bounce around a bit. In 2010, he didn't give up home runs, but didn't strike anyone out either. In 2012, he gave up the long ball, but managed to strike out more opposing hitters.

Santana has basically thrown four pitches over the course of his dominant career. Primarily he's a fourseam/slider/changeup pitcher, but he'll mix in sinkers about 12% of the time. In 2012, Santana really picked up his usage of his slider. In 2009, two years before his first shoulder injury, he threw it less than 10% of the time. That increased by about 5% in 2010 followed by another bump up to more than 20% in 2012. That's nearly as much as his changeup which he used about 10% less frequently in 2012 than he did in 2009. The chart below displays Santana's changing usage over time: 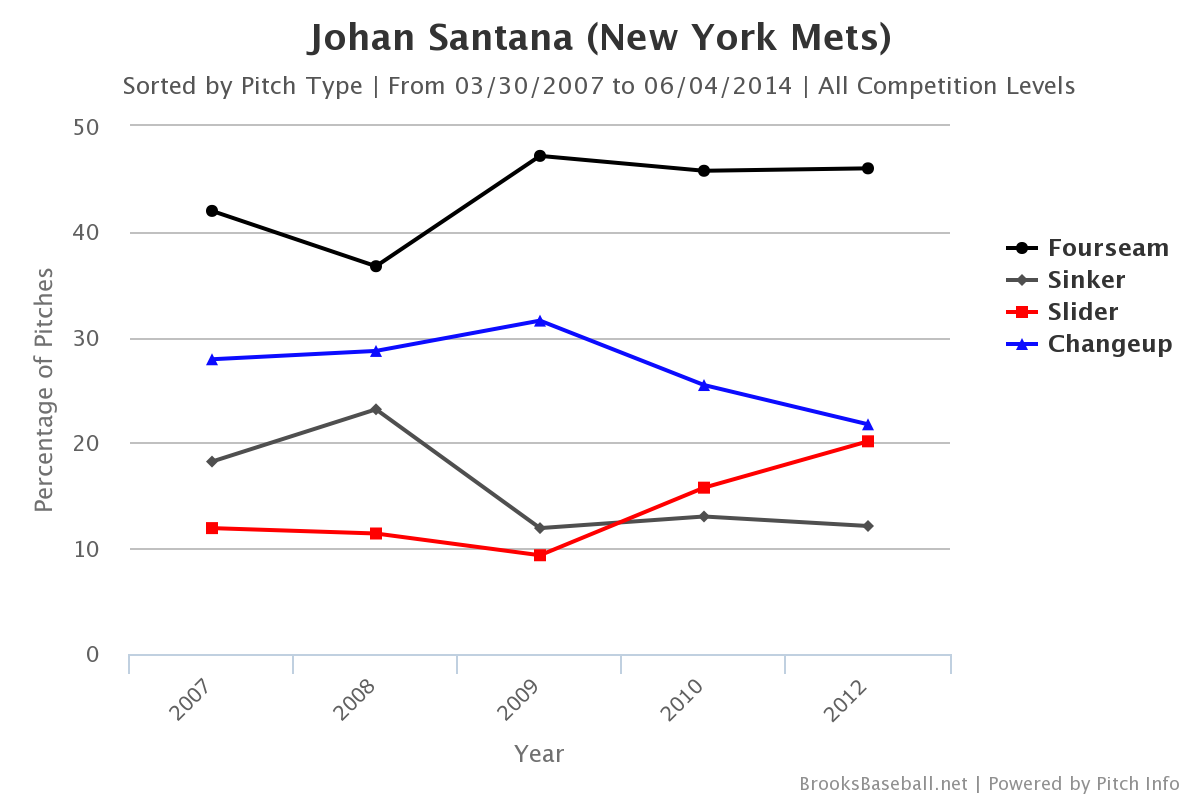 The only issue with an analysis like this is that we don't really know how Santana will approach coming back from a second shoulder surgery. We know that the fastball has been sitting in the high 80s according to reports out of the O's Spring Training complex in Sarasota, FL. We know that the changeup has been looking as impressive as ever. Perhaps Santana approaches 2014 as a three-pitch pitcher, abandoning his sinker in favor of his more consistent offerings.

In 2012, Santana pitched almost exclusively to the lower left hand corner of the strikezone (from the catcher's perspective). Below is a heatmap showing the raw number of pitches in each zone that Santana threw during the 2012 season. 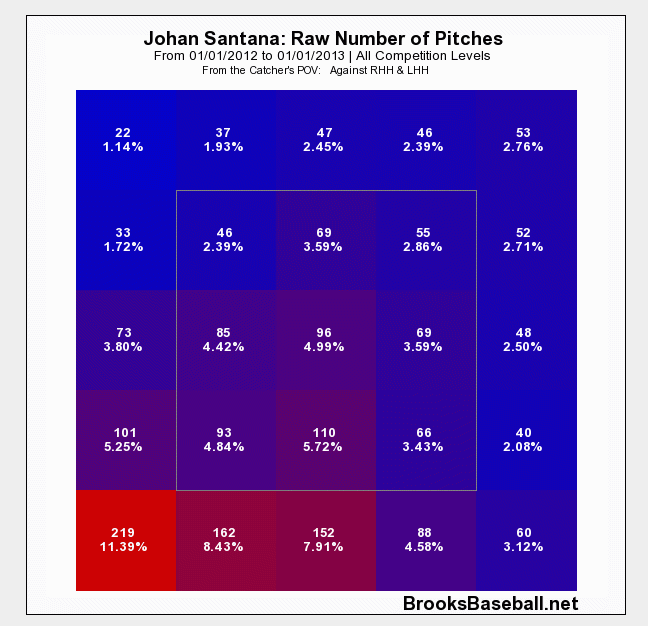 It will be interesting to watch Santana in 2014 to see if he continues to focus on this one small section of the strikezone, or if he'll try to mix up his pitch locations more. This is one of the more interesting aspects of the enigma that is Santana, as it certainly seems he's making a conscious effort to pitch exclusively to a spot regardless of pitch type or batter handedness (the chart does in fact look nearly identical for batters from both sides of the plate). For what it's worth, this wasn't always how Santana pitched, and it seemed to only become a trend during the 2008 season.

"It's kind of like waiting for a top prospect to be called up; only this top prospect is a 35 year old two-time Cy Young award winner"

I don't really know what to expect from Johan Santana this season, and neither does anyone else really. It's possible that he could pitch to the 4.25 ERA that Steamer projects for him, but it seems increasingly unlikely that he'll throw only 12 innings in 2014. Perhaps he'll be a bit worse and post a 4.43 ERA like ZiPS projects.

Johan Santana is going to recover from a second shoulder surgery in under three years to pitch in a Major League Baseball game. He might end up with a 4.50 ERA, and he might surprise everyone and post something much better like a 3.25 ERA. Either way, Santana's recovery and hopes to pitch in MLB this season is part of why we all love baseball.

In roughly two weeks, we'll all start to find out exactly what this new version of Johan Santana looks like. It's kind of like waiting for a top prospect to be called up; only this top prospect is a 35 year old two-time Cy Young award winner who had major shoulder surgery, then threw a no hitter, then had another shoulder surgery. Other than that, Santana's return is just like the debut of a top prospect.