Hitting while striking out

Justin Upton strikes out a lot. He also hits for a pretty high average, which is strange.

Share All sharing options for: Hitting while striking out

On Wednesday, Justin Upton went 2-4 with a strikeout in a 7-1 loss to the Cardinals. Doesn't sound like anything special. It wasn't. He added two hits to an already strong start to the season, in which he is hitting .303 with a wRC+ of 171. The part of his box score line that should draw attention is the lonely strikeout. Prior to Wednesday, Upton had struck out in 11 of his previous 15 at-bats. His K% of 34.1% ranks third worst of qualified hitters in baseball this season.

It got me thinking. We often times think about the caricature power hitter, like the one in Rookie of the Year, with his tongue hanging out on each swing, either connecting for a monstrous home run or swinging and missing in dramatic fashion. We can think of a lot of all-or-nothing power hitters off the top of our heads. What is not often thought about is the hitter who strikes out a lot, but also hits for a high average. It seems sort of counter-intuitive. Good hitters hit for high averages. And good hitters don't usually strike out a lot. Then there is Justin Upton.

Justin Upton has always struck out a lot. He was trending towards improvement in Arizona, before taking a drastic turn for the worst upon arriving in Atlanta. 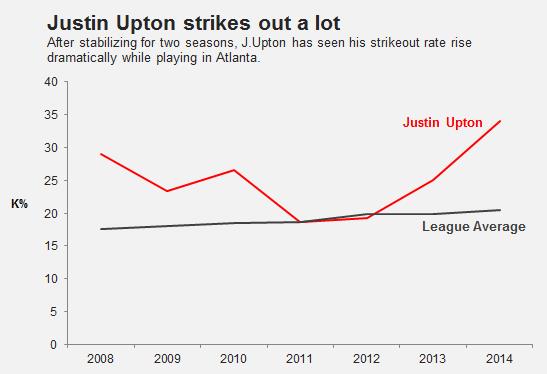 Overall, since 2008, among hitters with at least 3000 plate appearances, only seven hitters have struck out at a more frequent rate than Upton. He isn't just striking out, he is doing it a ton, over a huge sample of at-bats.

Those are the seven players who have struck out more frequently than Upton since 2008. With the exception of B.J. Upton, all of those names are players who you would consider all-or-nothing hitters. And then there is Justin Upton. His .278 batting average the highest of the group.

So when we look at the ten hitters who have struck out the most this season, it is no surprise to see Upton's name on the list again. And once again, his batting average surpasses the rest of the group, in some cases, by a lot. 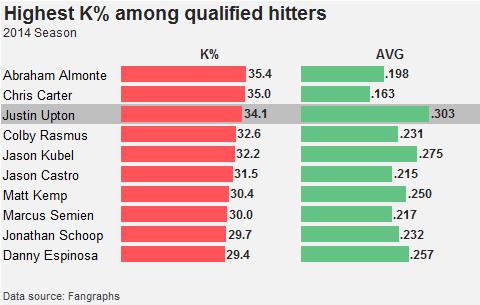 The most obvious conclusion to draw from all of this is that Upton must benefit from a favorable BABIP. Sure enough, his BABIP in 2014 is a remarkable .415. This doesn't mean he has just been lucky however. We know from looking over the course of his career, that despite striking out a lot, he has always hit for a strong average. His career BABIP is .335 over more than 900 games played. While his 2014 numbers may regress, his batting average to strikeout mismatch is likely to remain in tact.

2014 has been the year of the strikeout. Throughout the league, players are whiffing at unusual rates. For Justin Upton, it is business as usual. As is his uncanny ability to hit for a high average despite striking out so frequently.