Supply and demand tell us that when offense is scarce, it should become more valuable, but is this increase equally distributed across all offensive events and players? I examine wOBA weights to find out.

Share All sharing options for: The Increasing Payoff of Power: Examining wOBA Weights

The diminishing run-scoring environment in the MLB has been well documented. It seems as though every year since 2010 has been deemed the "year of the pitcher". 2014 has been no different. At just 4.08 runs per game, scoring is down 11% from 2009. Changes in run scoring environments present new opportunities for teams to exploit inefficiencies in the game. Optimal roster construction changes with the game’s run-scoring environment. Simple principles of supply and demand tell us that when runs are scarce, players who can produce lots of runs have more value. But does the demand rise uniformly for all offensive players? To examine this further let us turn to our favorite offensive metric, wOBA.

As the name implies, weighted on-base average (wOBA) weights each offensive event differently. The goal of the statistic is to weight each event in accordance with its run value. This means that the formula for wOBA is subject to fluctuations in league trends and therefore changes year to year. By examining how these weights change, we can gain some insight into whether or not the increase in value for each type of offensive event is proportionate. Then we can translate that to examine the disproportionate increases in value for different types of players. This chart shows the relative change in wOBA weights over the past 10 years. The chart is indexed so that each weight is set to 100 in 2005. 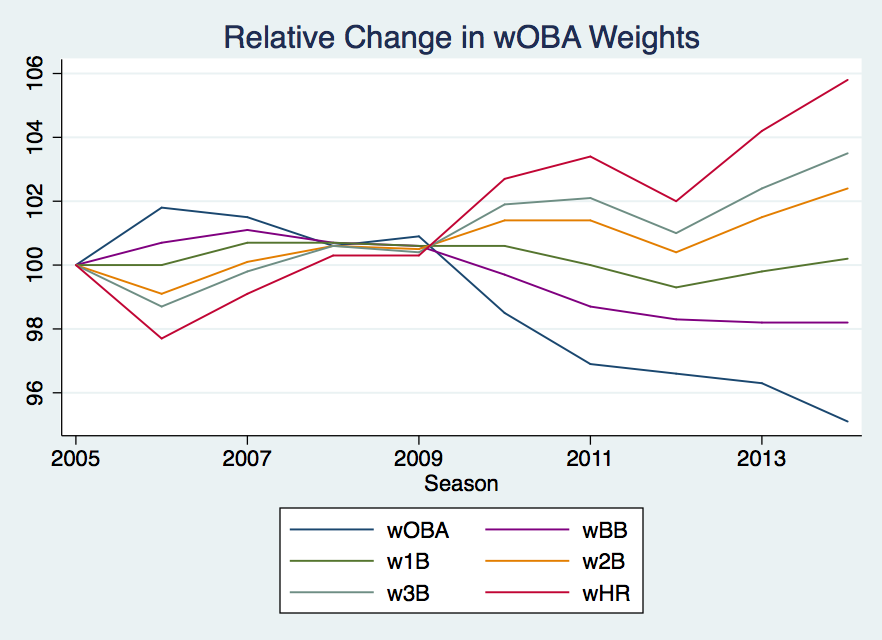 When run scoring began to turn downward in 2010, the chart starts to show an interesting spread. The spread gets even larger in 2013 and 2014, when run scoring was down the most. The chart shows us that the more valuable events fluctuated by the greatest percent. Because this chart is just showing us the relative changes, not the actual weights, this did not have to be the case.  This gives us empirical evidence that the value of power has increased in today’s game.

Let us compare two player seasons by looking at their run values added in different years based on wOBA’s changing weights, scales, and league averages. This will help give us a feel for what type of player has more value in a low run-scoring environment. Consider Player A, a speedy singles hitter who is one of the best hitters for average, but doesn’t really have home run power. He swipes some bags but doesn’t walk very much. Now consider Player B, a true slugger, he will lead the league in homers, but with a low average and high strikeout and walk numbers. Imagine these players have the following lines every year regardless of the run scoring environment.

In our base year, 2009, both of these players would have had a wOBA of .367. Using the 2009 wOBA scale and league average we can convert this to weighted runs above average.

In other words, Player A and Player B would both have contributed about 20 runs more than the average offensive player.  These lines will be far more valuable in 2014, but their respective increases will be unequal. In 2014 Player A would have a wOBA of .368, corresponding to a 42% increase in wRAA. Player B on the other hand sees a larger boos; his wOBA is up to  .373 in 2014, which translates to a 54% increase in wRAA.

The difference is not huge, but Player B is now worth 2.5 more runs than Player A. Sure, 2.5 runs is only about a quarter of a win, but this is solely due to the changes in the league. The players put up carbon copy seasons. Who were these players? Ichiro Suzuki 2009 and Nelson Cruz 2009, each prorated to 650 at bats (plus I took the liberty of giving Cruz an extra homer to make their base wOBAs even). The difference in value between Suzuki and Cruz’s seasons in the context of 2014 illustrates how event run-values, and thus wOBA, change unequally in low run scoring environments.

Weighted isolated power is a more precise way to measure the power contributions of a hitter.

Players exhibit significantly decreased walk rates in their first game back from the concussion list. Is this hangover effect due to changes in swing rates following time off the field, or is it something else?

We cannot simply say, "Offense is down, so hitters are more valuable" as I naively did in the opening paragraph. Rather we find that offense is down in such a way that makes all hitters more valuable, but makes power hitters even more valuable. This is not the most insightful finding in the world, but it demonstrates a powerful idea, the idea that a depressed offensive environment affects player’s value unequally.  As the landscape of the MLB changes, a new set of inefficiencies is created, just waiting to be exploited.

Daniel Meyer is a junior at Colby College and Contributor of Beyond the Box Score and Batting Leadoff. You can follow Daniel on twitter @dtrain_meyer.