One of the best trade deadline deals was ... Andrew Miller?

The lefty reliever has been incredible since he came to the Beltway.

Share All sharing options for: One of the best trade deadline deals was ... Andrew Miller?

When I think of the big trade deadline deals this season, whether or not they occurred on July 31st, I think of the Oakland trades. I think of the David Price trade. To a lesser extent, I think of the Yankees' trades for Prado and Headley as well as the Cardinals' trade for Lackey. I barely even considered the Andrew Miller to Baltimore trade. It's time to consider it.

Miller had two decent seasons as a reliever before this year. His K rate was at least 30% in both 2012 and 2013, but he also walked a lot of guys. His K-BB% last year was good but not elite. However, in 2014, he took a leap forward. He's still almost exclusively a fastball/slider guy, so his pitch usage isn't responsible for the jump. He's still using the fastball earlier in counts and the slider as the putout pitch. The main difference appears to be that the slider is generating more whiffs. 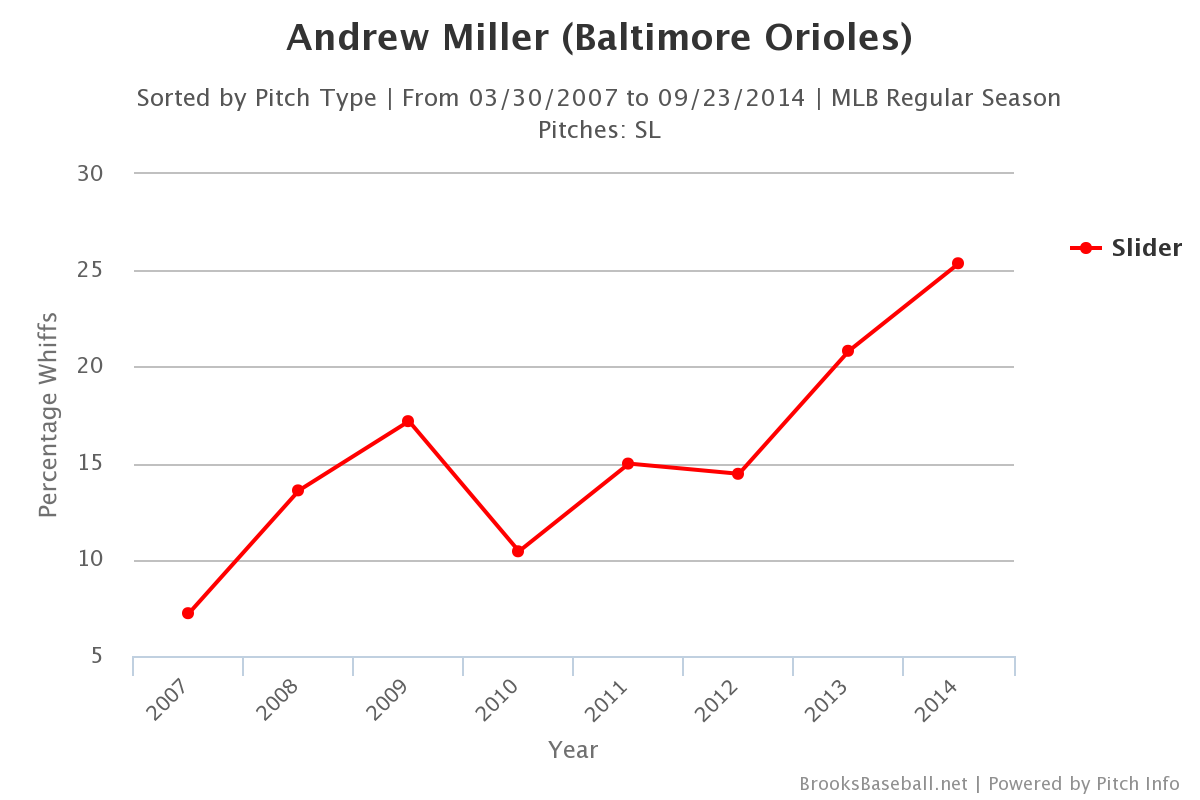 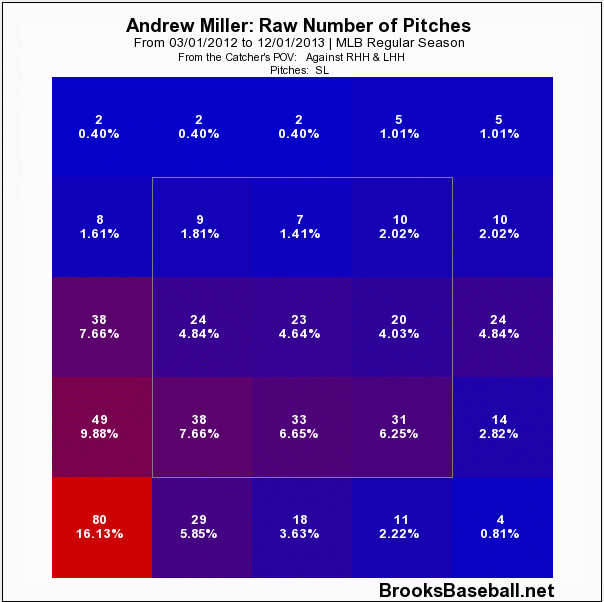 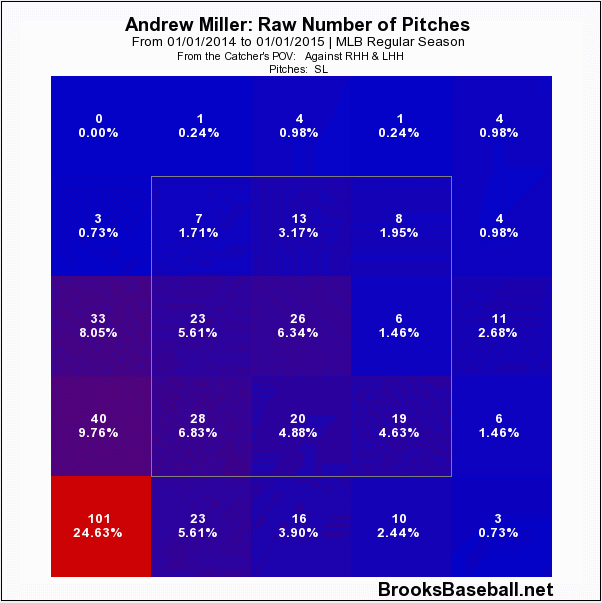 Against right handed hitters, Miller is back-footing that slider like a champ. Against lefties, it just dives away from them. Miller has greatly increased the concentration of pitches in that low-and-away (against LHH)/low-and-in (against RHH) area while keeping the pitch away from the strike zone.

Miller's been effective this year. That's fairly known. However, since being traded to Baltimore, Miller has been nothing short of a steamroller in his 18.1 innings. It's a very small sample size, of course, but Miller has a 0.4 FIP in those innings. He's allowed only two earned runs. TWO. He's allowed zero home runs. In that short number of innings, Miller has actually gathered more than one win of value (fWAR). Miller has provided Baltimore with almost as much value as he gave the Red Sox in less than half the innings this year.

Comparing against an arbitrary selection of other deadline deals, Miller ranks fairly well. That David Price guy has only about half a win more than Miller in more than triple the innings. Miller's been more valuable than Lackey or Justin Masterson for the Cardinals; in fact, Miller has been more valuable than those two combined since Masterson has been terrible. Jon Lester has provided almost the same value as Miller but in about quadruple the number of innings. Martin Prado and Chase Headley have provided more value to the Yankees, but they are hitters and also play defense. Both players have been good at both things.

Comparing against other relievers, traded or not, Miller ranks fairly well again. Miller ranks 12th in RE24 since the beginning of August, but he's clumped around a bunch of other guys. He's not far from the top 10, as shown in the table below.

If fWAR is a bit easier to capture his value without context, here's a table showing the top 10 relievers by fWAR in August and September. You'll find Miller tied at the top with two of the very best relievers this season.

While the Orioles' main drivers of great performance this year have been the power and the defense, let's not forget that the Orioles have a filthy bullpen made all the filthier by the acquisition of Andrew Miller.

EDIT: All these data were current as of the morning of 9/23. Of course, during the evening of 9/23 and after this article was written, Miller went out and gave up a home run, which increased his FIP from 0.4 to 1.04 as an Oriole. Baseball. The point still stands. Miller is really good.

Kevin Ruprecht is an Editor of Beyond the Box Score. He also writes at Royals Review. You can follow him on Twitter at @KevinRuprecht.